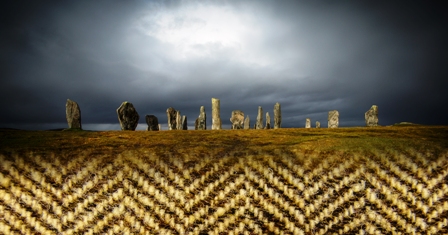 Exploring the Outer Hebrides is akin to walking on a canvas where the paint is wet and the artist is never finished. A sweep of an invisible brush changes the light, landscape and colours in an instant. One moment it is flat with red-brown coloured moorlands, then mountains roll into expansive stretches of golden sand caressed by azure-tinted waters. The thing about wet paint is it sticks, and after travelling the Hebridean landscape the wonderment is you can’t get it out from under your skin – nor do you want to!

My fascination with this place is more than skin deep, however. Below the veneer of ever-changing beauty lies a history and culture from which is born Harris Tweed, a fabric that clothes people, sustains the area’s inhabitants, and protects a way of life.

My journey began in a rented, converted blackhouse – TighBhisa – by Tolastadh a’ Chaolais on the west coast of the Isle of Lewis. This traditional cottage had been restored, embracing the expectations of modern living but still oozing history and charm. Constructed of local stone, and originally with a thatch roof, it once would have housed animals at one end and the family at the other. Harris Tweed fabric decorated the interior. The curtains, cushions and a ceiling drape were beautifully crafted in a pale blue colour that matched the sparkling waters of the sea visible from the windows.

Keen to understand more, I visited the restored blackhouse village of Gearrannan and stepped back in time. I learned about crofting; how families cut, dried and burned peat, and how they sustained themselves by farming land with poor soil, fishing the seas, keeping sheep and gathering the wool to make cloth. The practice of spinning wool and weaving cloth is indigenous to these islands and goes back hundreds of years. Each home had a spinning wheel and a small loom. The wool was coloured with natural dyes extracted from plants or from the soil of the land and the entire process was undertaken on the croft and in the home. The finished tweed was used to clothe the family, barter for goods, or give to the landlord in lieu of rent.

The practice of spinning wool and weaving cloth is indigenous to these islands and goes back hundreds of years.

My next stop was Carloway Mill. Established in the 1980s, this is the smallest of three textile mills that now produce Harris Tweed. I met mill manager Kathy Macaskill, who was born in Ontario, Canada. Her father and maternal grandparents all hail from Lewis. When she was 18-years-old, Macaskill’s father sent her on a trip to Lewis so that she could explore her roots. On that trip she met her husband, also from Carloway, and they settled there in 1988. Chatting with her, it is obvious that she is passionate about Harris Tweed. “I studied textiles in Canada, and my interest in Harris Tweed started when I went shopping in SEARS. There was a big display of Harris Tweed jackets, and the colours just stood out from the other fabrics.”

Carloway Mill drips with history, charm and tradition. It prides itself on its traditional craft machinery dating back to 1906, and the artisan skills of its workforce. Macaskill points out that these skills are in international demand. “We currently export to all of Europe, USA, Australia, China, Korea, Hong Kong, India, and Japan. Large companies like Chanel, Brooks Brothers and Polo Ralph Lauren all use our tweeds.”

Local wool is blended with imported wool from the mainland, as the islands alone cannot sustain enough sheep. The wool is then delivered to the mill where it is washed and dyed in large vats. Each mill has its own unique range of ‘house’ colours, and what struck me was how the colours – now created with modern dyes – resonated with the landscape. I had seen the oranges on the moorlands, the browns in the peat, the greys in the stones of the buildings, the yellows in the thatch of the houses, the greens in the grass and the blues in the sea and the sky.

Once dyed, batches of different coloured wools are blended in predetermined proportions to create exact colours necessary for specific customer orders. Next, the fibres are delicately mixed in carding machines before being drawn into soft yarn. The yarn is spun to make it stronger and finally wound onto bobbins ready to be used in the weaving process. None of the weaving is done in the mill. The bobbins of coloured wool and a pattern for the required weave are sent to outside weavers and the whole process returns to its roots.

Watching a weaver work the pedals of a treadle loom…is to witness a craft and skill passed down many generations.

By definition, Harris Tweed must be hand woven on a treadle loom in the weaver’s home. When the company’s production was at its peak in the mid 1960s there were 1700 weavers spread across the islands. Today, there are 160 self-employed weavers.

Watching a weaver work the pedals of a treadle loom – to see the bobbins spin and watch the wefts (the threads that go left to right) and warps (the threads that go front to back) intertwine to create a length of woven fabric – is to witness a craft and skill passed down many generations.

Carloway Mill uses a regular workforce of 20 local weavers. Once the tweed is woven it is collected, brought back to the mill and examined by eagle-eyed darners. Any imperfections are mended before the tweed is washed, beaten, steamed, pressed and finished to produce a perfect length of tweed. From its arrival at the mill as raw wool the entire process for each length of finished material is recorded. The mill then contacts the Harris Tweed Authority (HTA) in Stornoway requesting an inspection of the fabric. An HTA inspector will check the tweed and the paperwork prior to issuing the all-important Harris Tweed certification stamp with the Orb trademark. Only after the mark is ironed onto the tweed can it be labelled and distributed as Harris Tweed.

Macaskill is rightly proud; “It is quite amazing when you think that Harris Tweed is woven in a weaver’s shed on his croft and ends up around the world.”

Lorna Macaulay is Chief Executive of the HTA. Previously, she worked for Highlands and Islands Enterprise. She grew up on Lewis and knows the importance of Harris Tweed to those who live in the Outer Hebrides. “To islanders, Harris Tweed is more than ‘just another sector’ in what can be a difficult and struggling economy.  It is integral to our culture and our heritage, as well as retaining economic activity in the most rural districts and villages of Lewis and Harris. The Harris Tweed industry provides employment for in excess of 350 people on the islands. In an economy of our size that is hugely significant indeed.”

Following its hey-day in the 1960s the industry suffered badly with the advent of synthetic fabrics and cheap foreign goods. Currently, it is enjoying a resurgence of interest with major fashion houses keen to make garments and accessories from materials with a provenance. This is generating new interest in the craft of the weaver as a way to make a living. Macaulay notes, “It is encouraging to see new weavers embracing the industry and its traditions. Weaving was largely a family tradition with the skills and the all-important loom passing from father to son. That does still happen but we also have people entering the industry who have no familial or cultural connection with the islands.”