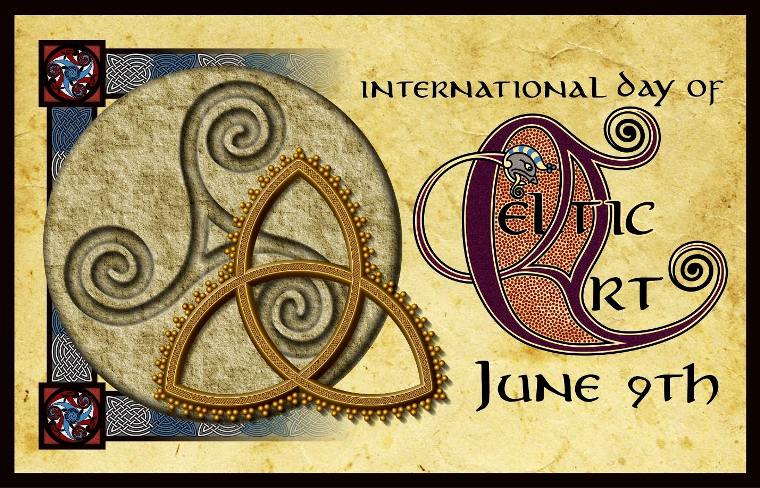 June 9 has been designated as International Celtic Art Day. The announcement comes from a group of contemporary Celtic artists, scholars, traders, and Celtic Art lovers that have been exchanging ideas online since June 9, 2000. The group is comprised of many of the leaders of the current Renaissance of Celtic art, including Michael Carroll, Ruth Black, Aidan Breen, Courtney Davis and Stephen Walker.

“The choice of the ninth of June to celebrate Celtic Art seems almost obvious.” explains Walker, a Celtic jeweler in upstate New York who serves as the group’s moderator. “The Book of Kells and the Book of Durrow – both great medieval masterpieces of Celtic art – are associated with the Irish Saint Columba. June 9 is his feast day.”

Columba is also an excellent example of the international nature of Celtic art. In the year 563 AD, he left Ireland over a controversy regarding the copying of a book and took up residence on the Scottish Isle of Iona. From there, he traveled to Pictland, in northeastern Scotland, to preach the Gospel. Columba’s network of churches and monasteries expanded far beyond these regions in the generations that followed. The style of Celtic art that spread across Northern Europe from the 6th to the 10th centuries was a direct result of the network of contacts began by Saint Columba.

While most people think of modern Celtic art as something copied from the past, Walker says the creativity and original designs that come from the imaginations of today’s Celtic artists are evidence that the style is constantly evolving.

“Celtic art is the style and tradition that has been passed down from early medieval Scotland and Ireland. The knots, interlace, spirals and key patterns have become emblematic of a sense of ethnic identity and heritage. This often done by copying designs and images from the past, but the most authentic expressions come from a mastery of the art form so that new and original art is created. 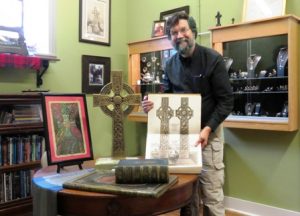 “Celtic art is popular because it is beautiful and mysterious, and it connects people to a sense of their past and heritage.”

Chicago visual artist Michael Carroll, whose grandparents emigrated from Ireland in the early 1900s, believes that the Celtic art movement is as relevant to the times as the Cubists were to theirs.

“This resurgence of Celtic art has been primarily fueled by the proliferation of the internet, and social media. Where once people of Celtic heritage were scattered and isolated, they have now come together to form a professional community – and so have their artists.”

Fiber artist Ruth Black of Inverness was an early supporter of the concept, and is excited about promoting the celebration in Scotland.

“I will be holding an “Open Studio” day at my workshop and inviting people to come in and learn felt-making skills. They can also get an education in Celtic knot-work designs by assisting me in making a large wall panel to decorate my studio. I also hope to get other artists to try out Celtic designs in their own particular practices.”

The first actual event to be scheduled for International Celtic Art Day is an Open Studio exhibit by artist Angelique Moorman in the Netherlands. The concept has also seen support expressed from forum members in Spain, Canada, Ireland, Australia and New Zealand.

Going forward, Walker is confident that those who call themselves Celtic artists will continue to share ideas and encourage each other.

“This year, being the first, will be largely experimental. We will see what works and build on those efforts that get traction.”

“We hope that International Celtic Art Day will become an annual tradition, one that will reflect and promote the continuing public interest in the art. The aim is to raise public awareness of our Celtic heritage, celebrating not only ancient masterpieces like the Book of Kells, but also the new ones being produced by living artists today.”