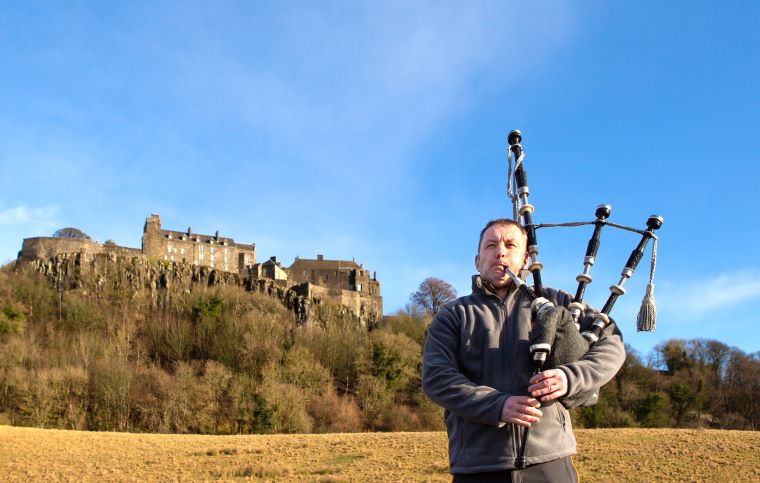 Ross Johnstone is the only bagpipe maker in Scotland to be accredited by The Guild of Master Craftsmen. As such, it is with a sense of justifiable pride that he knows he has – quite literally – left his mark on many a set of hand-crafted, Highland bagpipes and that his creations are played by some of the world’s best pipers.

I recently met with Johnstone in his workshop only a stone’s throw from Stirling Castle – a place where he has played his bagpipes on many occasions. Surrounded by lathes, drills, wooden drones and chanters, decorative silver ferrules – metal, connecting collars – and reused ivory mounts, there was little doubt that I was in the presence of someone who knew a thing or two about bagpipes. “It runs in the family,” he announced as he carefully routed a cylindrical piece of black wood spinning in the lathe. “My great-grandfather was a pipe major with the Gordon Highlanders, but it was my grandfather, who was born in India in the 1920s and was a piper all of his life, who got me interested in the pipes.”

Being born and brought up in Edinburgh gave the young Johnstone many opportunities to watch the tartan-clad pageantry of pipe bands and to become accustomed to the skirl of the pipes. Around the age of six, he started taking whatever opportunities arose to follow his grandfather whenever he was playing. Encouraged by his grandfather, he started – like all good pipers – practicing the chanter, and, by the age of 11 he was playing the pipes with the Edinburgh Post Office Pipe Band. Leaving school in his teens, he enlisted with the army, spending three years with the Argyll and Sutherland Highlanders before returning to civvy street to begin a two-year apprenticeship in motor mechanics. Not wishing to forsake the military, he joined the Territorial Army (now renamed Army Reserve) – Royal Engineers. His army training and the skills he acquired as a mechanic and engineer were soon put to good use on a nine-month operational tour of Bosnia and a four-month tour of Kenya. Returning home to Edinburgh, he began a five-year apprenticeship in bagpipe-making with some of the nation’s finest craftsmen. Having completed his bagpipe-making apprenticeship – and still playing the pipes at every opportunity – Johnstone volunteered for a nine-month operational tour of Iraq before returning home once again, this time spending several years working as a mechanic for a well-known U.K. garage chain. Struggling with the boredom of the dull daily routine, he took the opportunity of a six-month spell of contract work in Germany, repairing U.S. Army Humvees, followed by a year in Kuwait repairing Humvees and M1 Abrams battle tanks. 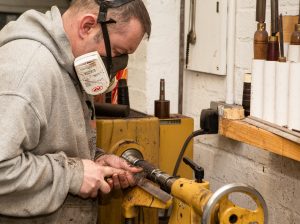 His wartime travels were complemented by an even more impressive list of nations visited as a bagpipe player. He has played with the Territorial Army 71 Engineer Regiment Pipe Band, 7th Battalion The Royal Regiment of Scotland Pipe Band, and The Black Watch Pipe Band – all of which has resulted in him performing at military tattoos in Edinburgh (13 times), Basel (4 times), Bermuda, Berlin, Nova Scotia, Moscow, Virginia, and Malmo. As well as tattoos he has played in the British embassies in Moscow, Kuwait, Bermuda, and France, and also at the Queen’s state banquet and at Queen Elizabeth The Queen Mother’s funeral. He lists a three-month tour of North America with the Black Watch as a highlight of his musical career and cites playing at the hallowed Arlington National Cemetery in Virginia as one of the most poignant moments.

When asked if there has been any other single event that is especially memorable, he lifts a chanter to his lips, places his fingers over the holes as if playing and reminisces with obvious joy, “Playing on stage in New York alongside Lady Gaga, Bruce Springsteen, Stevie Wonder, Billy Joel, and Mary J. Blige for Sting’s sixtieth birthday celebrations is the best job I have ever done!”

He met his partner Lynzie through the Territorial Army. She is a piper also and they share a house with their four St. Bernard dogs in the quiet village of Menstrie at the foot of the Ochil Hills. With all the musical and practical skills accumulated over the years it wasn’t a difficult step to start repairing and making his own bagpipes. That developed into doing repair work for friends and, as his reputation as a quality craftsman grew throughout the piping community, the work soon rolled in. He set up a workshop next to his home and, in 2014, Johnstone Bagpipes was established.

Although the backbone of his work is the repair and restoration of old and damaged pipes, he is one of only four craftsmen in Scotland hand-making traditional Highland bagpipes.

Today, the majority of bagpipes sold commercially are produced in factories where they are turned out in their hundreds by computer-controlled machines. For Johnstone, who still recalls the magic of the first time he ever held his grandfather’s pipes, it is not the way this instrument – with its ancient and cultural heritage – should be made. Clearly passionate about his work, he takes a length of dark, square-sectioned wood from an overhead shelf and, running his palm along the smooth surface explains, “I give the wood time to settle, and this means there is less chance of it cracking or splitting. There is also something about the beautiful, warm tones of hand-made pipes coupled with the knowledge that you are playing something created with the love and care of someone who understands the heritage of our national instrument.” Ebony used to be the wood of choice for making pipes, but many of the species of trees regarded as providing true ebony are now considered ‘endangered’. African blackwood – often from Mozambique – is now the preferred wood. It is not a true ebony, but it is hard, durable, impervious to water, has little obvious grain and, although it is difficult to work with, it is a beautiful wood for turning and for holding intricate details. Showing me several examples, he explains how the square section is turned into a smooth cylindrical ‘rod’ before being drilled centrally down its length and otherwise shaped and grooved to form either the windpipe, chanter, or one of the three drones – one bass and two tenor – found on a set of Highland pipes. In the old days, ivory would have been used for the various mounts. Today, there are several alternative, composite materials available although reusing old things made of ivory – such as snooker balls – is permitted under conservation legislation. Johnstone liaises with other craftsman to obtain the ferrules that adorn his completed pipes with the top-quality, hand-engraved, silver ferrules often coming from a renowned Canadian silversmith. 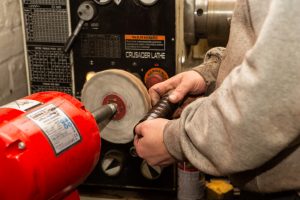 Many clients have their own special requests when ordering pipes and he once made a set with solid gold ferrules for a wealthy American from Texas. Laughing, he recalls the most bizarre request he has ever received, “I had one customer ask if it would be possible to make the mounts from his late father’s bones. Naturally, I declined but was more than a little curious as to how the customer planned to obtain the bones!” Once all the individual components are connected to the bag, they are tested over four to five days by playing and tuning to ensure everything has ‘settled’.  Then, the bag cover and the cords that hold the drones together are added, providing the familiar, finishing touches that mark out the Highland bagpipes.

I have always admired the Highland bagpipes; whether it be the massed bands at a tattoo or a lone piper on the battlements of a castle, there is something deeply rousing about their sound. After an afternoon spent in Johnstone’s workshop, I am much more knowledgeable about how pipes are made and certainly more appreciative of the true craftsmanship that he brings to his creations. It will certainly add another dimension to my next experience of hearing them played. ~ Story by Tom Langlands