Through the Eye of the Gael 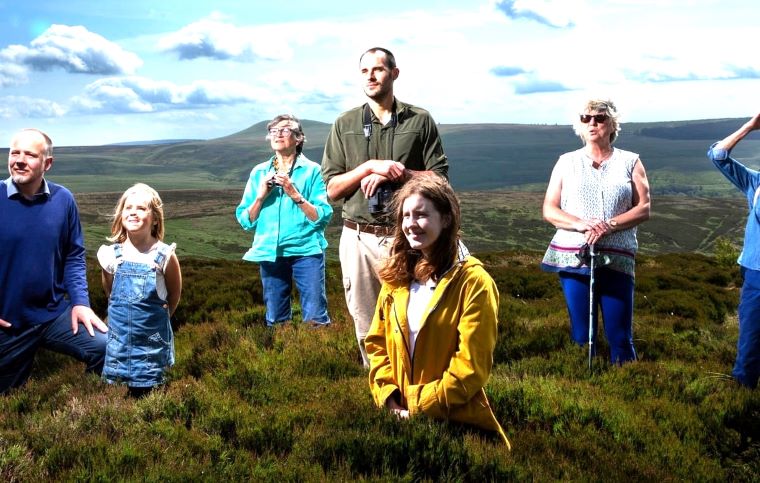 Learning a new language is, at its best, opening new ways of viewing the world. To be sure, it is only glimpses in the beginning, but those glimpses draw the learner into a deeper relationship with the language.

Far from Samuel Johnson’s characterization of Gaelic as the “rude speech of a barbarous people,” Scottish Gaelic is a poetic language with complex concepts of time, and the intersection of people and place, embedded within the grammar and vocabulary.

Although the student of Scottish Gaelic may well find its grammar complex and challenging, deeper study reveals, embedded within its grammar, a different way of viewing the world that requires some conversion to its philosophy in order to understand it.

Scottish Gaelic sayings and word combinations are also rich in meaning. However, even single words can unlock a new way of seeing and relating to the world.

If grammar is the path we walk, and sayings and phrases are the landscape itself, words may be like stones along the path that opens ultimately to a new horizon. They speak to us of both Scottish Gaelic culture and mindset.

Academic linguists may take issue with my interpretations, however, here I will offer a few of the terms that I think reflect the relationship of the speaker to his or her community, and suggest how even a single word can convey a different way of viewing our reality that is entirely unique to the Scottish Gaelic language. I caution that this is but a smattering of the possibilities.

Let’s take as our first example one of the Scottish Gaelic terms best known to English speakers: céilidh. 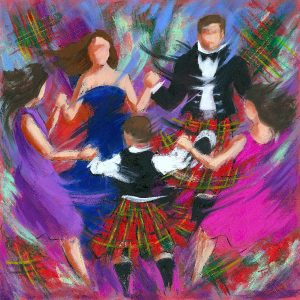 Céilidh – the word resounds with joy, fun, and music even to those who have no intention of learning the language.  For many readers, the term may immediately

conjure up a band, dancing, and lots of beer. Or perhaps a concert or performance with several singers or musicians taking turns on a stage. However, the basic meaning of the term is to visit. It refers also to a gathering at a “céilidh house” where songs, poems, stories, and news are shared, usually amongst people who know each other well; an expanded form of a visit and an expanded form of what might happen in a visit with a friend or relation. The poet, Iain Mac a’ Ghobhainn, or in English Iain Crichton Smith, described his view of the traditional céilidh:

“The traditional ceilidh which was held in the village in the village ceilidh house was a celebration of the happenings of the village, it was alive, it was a diary and a repeated record. . . the ceilidh represented the community that joined together in entertainment created from within itself. Stories would be told, songs would be sung.”

The traditional céilidh also reinforced bonds. And for the exile, it evoked home and warmth. At the end of the song ‘S fhada leam an oidche gheamhraidh, Murchadh MacPhàrlain writes that he is “Far ‘m bu mhiann leam dhol a chèilidh” (“far from where I would like to be ‘céilidhing.’”). In this context, céilidh, implies “belonging”, being in a place where you feel connected, wanted, and a part of the fabric of community.

Before proceeding into anything more esoteric, we can visit another Scottish Gaelic term also well known to English speakers: slàinte.

Slàinte! the crowd shouts as glasses are raised. If we ask a group of people at an Irish pub the meaning of slàinte we are likely to get “Cheers.” Perhaps a few will say it actually means “health”, and they would be correct. Slàinte directly translates as “health”.  Slàinte Mhath! Good Health. Air do shlàinte! To your good health!  Òlaidh sinn do dheoch-slàinte. We drink your health!

The root of the word, however, is slàn. The root word, of course, also refers to health. An slàn dhut? Are you well? Guma slàn a chì mi thu. May I see you well. However, it also means “whole,” as in the poem, An Roghainn (The Choice), by Somhairle MacGill-Eain (also known by his English name Sorley MacLean):

McGill-Eain translates that part of the poem as:

But had I the choice again,
And stood on that headland,
I should leap from heaven or hell
With a whole spirit and heart.

So, what are we really saying when we toast with the term “slàinte”? We are wishing upon others wholeness, represented as health, and including all those things that constitute health and wholeness: physical and mental health, vibrancy, love, family, community, livelihood, and peace. 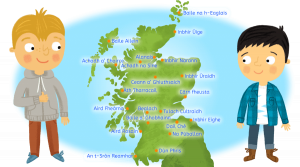 Dùthchas is a term that resists easy explanation, as it represents a set of ideas. The origins of any language reflect the intersection of people with their land. “Place” is a very important concept in Gaelic.

Dùthaich refers to land, but specifically to one’s native land, the land with which one has an intimate connection. In the form dùthchas, the word refers to the place of one’s origin and, specifically, to hereditary temperament, spirit, or rights derived from that connection. In the form dùthchasach, it refers specifically to indigeneity, as well as traditions or customs that derive from that indigeneity and a love for one’s native land.

All these terms refer to an intersection between people and land that go beyond the place you were born or places you’ve lived.

In Michael Newton’s words, dùthchas is the idea that “people belong to places rather than places belonging to people.” Indigeneity is based on a shared history, experience, and interaction with that land. The right to it is rooted in daily habits and activities and it is bound up with relationships to others, and responsibilities.

And how would you want to be known in your community? In traditional Gaelic communities you would want to have cliù.

Cliù appears in the dictionary as “1 Fame, renown. 2 Praise. 3 Character, reputation.” Such as, Fo dheagh chliù. Under a good character.

But in context of the culture, what does “character” or “reputation” mean? What does it mean to you, the reader, to have a good reputation? Is it “honesty,” “kindness,” or other traits?

“The Highlander has a concept of cliù, which roughly means ‘reputation,’ and such a concept implies that a man who has it may be considered useful to the community, not glorified, but respected. . . . . he wishes to be known as one who belongs to a community and who does service to that community.” (Real People in a Real Place, p 19)

This particular concept of having a good reputation is rooted in the idea that the individual is part of a community.

With that, let’s begin to wander the path a bit outside the physical world of the community.  Take, for example, aiteal. 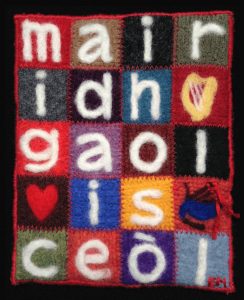 Aiteal is a very small quantity of something, but it can also be a glimpse of something, a breath, a breeze, a ray of light, or briefly heard speech. All of these are fleeting experiences that imply that something much larger exists, glimpses, if you will, for those who want to follow further, prods to take the next step.

A word like aiteal can swing you from the seemingly insignificant, to passing things like a breeze or a ray of light that sharpen momentary awareness of life, to breath, and to the glimpse of something that lies behind and beyond all of that.

Some words combine the most unexpected things, like dust and atoms.

Smùirnean refers to truly tiny things… a mote, an atom, a particle of dust – things that range from having no importance to us (except maybe the need to clean it away), to unseen building blocks of life. But it is also the small, even uneasy, feelings we get when we are on the point of realizing something; a tingle, a shiver, a slight sense of unease or heightened awareness, perhaps of the interconnectedness of life. Dust and atoms – all parts of a whole.

And some words have the potential to upend our understanding of reality, like crith.

Crith reminds us that our understanding of the world we see is limited. Crith refers to trembling or shivering. It could be from fear or cold, but not just from fear or cold. It’s the vulnerability and insubstantiality of solid objects – the tremor from an earthquake, or the shimmering in the air one sees as part of a heat haze, or the ghost light of a will-o’-the-wisp, (those mysterious atmospheric lights seen by travelers at night, especially over bogs, swamps, or marshes). It’s the layer of floating moss on top of clear water in a quaking or quivering bog. It’s the crumbling earth from a ploughed and dry field.

Seen this way, crith reminds us that our material world is shifting, that what seems substantial can change, that a glimpse of something on the other side of the veil is not only possible but also very near at hand. And that shiver might be the beginnings of understanding.

Scottish Gaelic has many ways of hinting that our world is not as rigid or stable as we like to believe. Science has started to catch up with such indigenous knowledge with our growing awareness of quantum physics and how electrons are in continual movement… materialising, dematerialising, then rematerializing somewhere else.

The fact that any solid, dependable mass that starts to quiver or falter can be referred to as crith makes it an ideal word for the unpredictable and infinitesimal particles that we have delineated as the building blocks of all life.

It isn’t just trembling and quaking that gives a hint that something else is to be glimpsed, as lannair indicates.

Lannair is a beautiful example of a word that leads from an experience of physical sight to innersight. It means a glittering or gleaming, but not like glitter thrown on art projects, or lights hung about the room. It’s the reflection of rays from a polished surface, the phosphoric glitter from fish scales in the dark, or the calm or glitter caused by oil on water. It’s the quicksilver flash of the salmon in stirred waters.

At the same time, lannair can be a great flame, and not just a bonfire.  It may refer to an inner flame: Thàinig lannair ann an sùil Chaluim (a gleam came into Calum’s eyes, Calum’s eyes shone with an inner fire/light). Understanding lies just beyond the glitter.

Finally, we will leave you with one of our favorite words in the language, deò.

Deò is breath, but also air. It’s a ray of light, but also the vital spark of life. It’s vision, but not just sight. It’s vision that allows one to see beyond, even beyond the veil. And it is the place where a stream falls into the sea, where one life or path merges with the infinite, where we are all connected. Deò is almost like a mantra, a chant that draws you to that point where the stream lets out into the sea, a place between worlds, a gateway through which past and future both flow.

The beauty and the deep meaning of Gaelic words can enliven our language learning as we weave through lenition, the genitive case, and grammatical challenges. However, it can also be a path to reorientate us, to turn us back to what we have forgotten about our connection to the earth, to each other, and to how we view our world.

If we dare to dive in and escape the confines that language and modernity has placed upon us, there are whole worlds of new experiences awaiting.