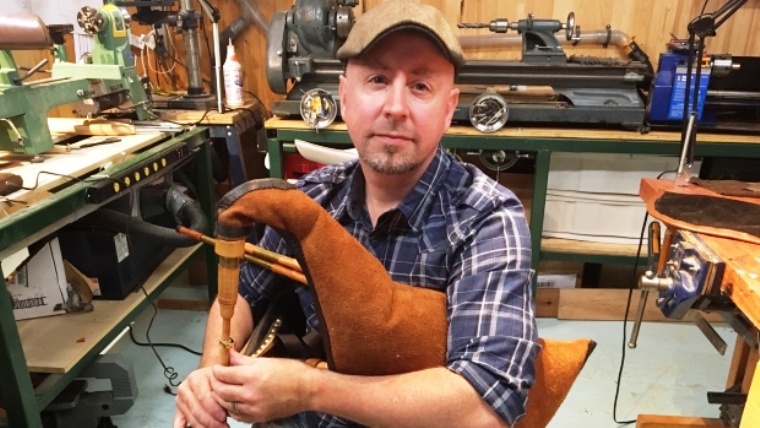 In 2006, Keith Mullen was drawn to what he calls the “expressiveness” of the uillean pipes. Only a few short years later he picked up a set of Hamish Moore small pipes.

And while he continues to play off and on, most of his time is now spent in his shop, amidst the exotic woods, metal and leather, the staples of the pipe-making craft.

“Of course, I play-in pipes and troubleshoot them as I make them, but I don’t find myself playing for the simple sake of playing as much as I would like to. I have an interesting mix of skills and cultural awareness that makes pipe-making a natural fit for me.”

Like many Atlantic Canadians, Mullen is mix of Scottish and Irish ancestry – his roots stretch back to Donegal, Tipperary and South Uist. That heritage is never far from his mind, having grown up in Tracadie Cross, Prince Edward Island, near the Glenaladale Estate where 200 MacDonald Clanranald pioneers established a settlement in 1772. 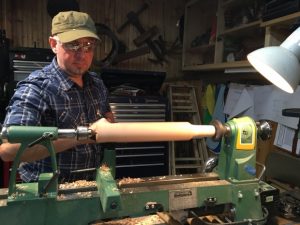 Today the forty-something entrepreneur lives a few kilometers to the east of that landmark, in the community of Canavoy – an anglicization of the Irish ceann an bhá, meaning head of the bay – on the southern-most tip of Savage Harbour Bay.

Mullen first contemplated pipe-making by reasoning that no pipe-maker in history had as many tools and machinery at his disposal as does today’s average handyman. On that basis, he did some research and got to work.

“Once I figured out what the end result had to be, and realized very little was written in stone, then I found my own path with the resources I had available to me.”

He isn’t suggesting that pipe-making is a casual art.

“In terms of specific challenges, the tolerances are fairly tight for a wood craft, and the reeds are challenging with measurements down to a thousandth of an inch. Three or four rubs on the sandpaper can be the difference between a great sounding reed and one that is heading for the scrap heap.”

After a 20 year career as a graphic designer and illustrator, Mullen says his pipe-making business gave him a happy excuse to get his hands dirty.

“The blooper reel would be longer than the highlights reel at this point, but every mistake teaches me something so I don’t have any regrets. Every time I pull a set out of the oil bath it is like a birthing of sorts, and tuning the new pipes becomes my new best moment.”

Along with his pipe-making business, Mullen is the owner and operator of Silver Hand Creative, a small design studio serving the music industry. He also has a clothing brand, Trad Life Apparel, which is aimed at traditional musicians. Pipe-making is, in his view, a complementary business; another way to fuse culture, music, creativity and innovation.

“I make bellows-blown Scottish small pipes, primarily in A, but I am branching out to D and have a fair bit of interest in C pipes but haven’t had any luck finding a set of measurements for the latter.” 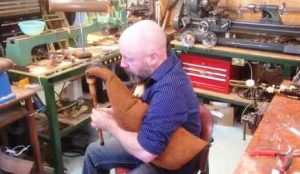 To date, the only outside supplier of Mullen’s products is Brigh Music and Tea in Charlottetown. However, his products are generating a lot of interest in Ontario, considered a major marketplace.

“There are so many reasons why highland pipers should or could be interested in small piping, but I’m amused to find the two worlds are divergent in many ways.”

He’d like to see the competitive piping world pay a little more attention to what he calls “piping in its natural form.”

“Make no mistake, up until the end of the Gaelic political systems in Scotland and Ireland, pipe bands did not exist as we know them today, and the real traditions predate them by centuries. The purpose of our shared vernacular traditional music is primarily for dance.”

He insists that there are opportunities outside pipe bands for pipers to have more fun with their music.

“There is a whole community out here that does not care if you play ornaments just right, or at all, as long as it’s got some rhythm and expression.”

The art of small pipe-making was nearly lost a generation ago, but today there are a number of skilled builders on both sides of the Atlantic and, as he points out, the caliber of emerging Celtic musicians is both staggering and humbling.

“Being immersed in the traditional music community of Prince Edward Island, I am not in any way concerned about the future of our musical customs.”