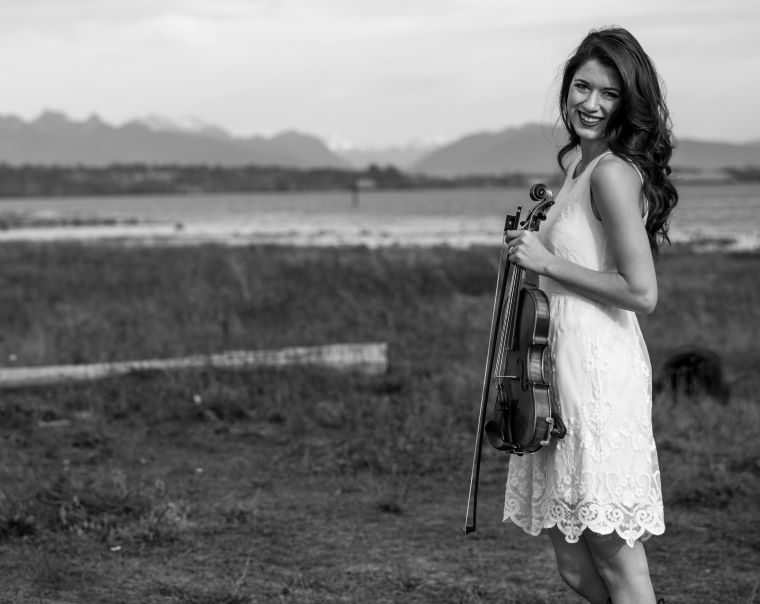 With four albums to her name already, along with an array of awards and a book of 66 original tunes, young Canadian fiddler Kierah has been in fast-forward mode since the age of four.

And while she still considers herself a traditional player, her modus operandi since early on has been to fuse older tunes with her own, original compositions.

“Of course, I love all the vintage jigs, strathspeys, reels, marches and airs,” she shares via email. “However, I like to believe that I am taking these pieces to new places musically, and crafting my own unique voice, sound and style along the way.”

Her most recent full-length recording, Strong Bow, showcases a strong mélange of classic and contemporary melodies.

“My producer Adrian Dolan and I took a modern approach to traditional tunes in an effort to create something fresh and unique. It was quite exciting to hear the music evolve in the studio right before our very ears.”

Strong Bow struck a strong chord with both listeners and industry types; the 12-track collection was nominated by both the Australian Celtic Music Awards for International Artist of the Year, and the Toronto Independent Music Awards for best out-of-province album.

“On Strong Bow I drew inspiration from (alt-rockers) Death Cab for Cutie. There is a subtle nod to Michael Jackson’s Billie Jean on one track, and a pretty clear reference to Nirvana’s Smells Like Teen Spirit on another.” 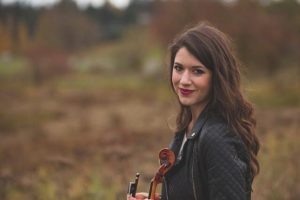 Bringing together the best of both musical worlds is both challenging and rewarding at once.

“I am actively creative and busy writing tunes and then I go blank for a while and like to give it a break so that I can come back to writing with new experiences and emotions to bring to the process. Usually I sit, or even lie down, close my eyes and just start playing notes until something catches.

“I like tunes that have me doing acrobatics on the instrument, whether it is going beyond first position into second or third, or adding artificial harmonics, or simply jumping across the strings in big leaps.”

Kierah cites her Mother’s insistence on studying classical violin as a child for her technical mastery – skills she later employed in Celtic music.

“I learned Swallowtail Jig and the Devil’s Dream and I was hooked. I asked my mother if I could switch to just learning Celtic music instead of classical, as I thought it was easier and much more fun, but she said I would greatly benefit from receiving the training and discipline classical studies bring. As with most things, she was right.”

Alongside that classical training, the youngster listened to – and learned – traditional Irish and Scottish songs.

“My mother’s side is 100 per cent Irish, with her grandfather coming from County Galway and her grandmother’s roots in County Offaly. They immigrated to Canada in 1906 on a huge ship called the Empress of Ireland and had 12 children, with my grandfather being the youngest.”

When Kierah recorded her second album – at age 14 – she included one of her own compositions called The Empress of Ireland. The tune was later licensed for an Ottawa exhibit about the majestic, though ill-fated ship which is often referred to as “Canada’s Titanic.”

Along with her mother, her greatest influence has been Irish fiddler Martin Hayes, whose album Live in Seattle she absorbed all day, every day. Interestingly, Hayes was also one of her instructors at a two-week scholarship program at the University of Limerick’s school of music.

“Every other instructor mostly just taught us the tunes…just the notes. Martin showed us how to play those notes with feeling, with emphasis, and with creativity.”

She particularly admires how her musical mentor often played a jig slow like a waltz or made a reel swoon like a love song before blasting off into a rollicking version of the same.

Hayes’ inspired more than music, however; over the past seven years Kierah has presented a program introducing young students to Celtic music in 270 elementary schools across British Columbia and Alberta.

“It is very important that we give back to the community. Celtic music and culture must be preserved and promoted, whether that be in the schools, in concert, on a recording, online, or simply by busking in a local market.”