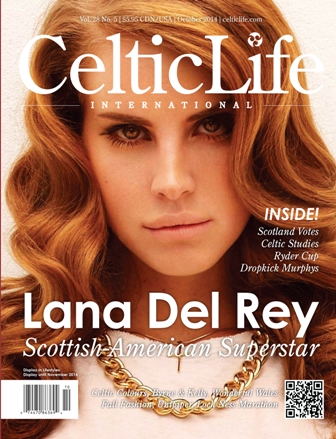 Lana Del Rey’s femme fatale persona might be all-American, but Celtic Life International has uncovered the USA-born singer’s taste for the Highlands.

Drawn to Scotland by her ex-boyfriend Barrie-James O’Neill (lead singer of indie band Kassidy) coupled with her Scottish/Anglo ancestry, it’s clear to see why Del Rey calls the isle her “second home.” She is a keen supporter of the Scottish indie scene – with Kassidy, until recently, opening for her – and there are obvious parallels between her sound and that of the Scottish band Cocteau Twins.

Outside music and, if Instagram is anything to go by, the singer is proud to sport her Scottish/American heritage; she’s even been spotted donning a Celtic Football Club shirt. Her song National Anthem may be a lyrical vessel about money being the doctrine of success, but it seems Del Rey yearns to put down roots. Famously, when asked where she’d call her permanent home, Lana replied, “I don’t have one…but when I have any time I go to Glasgow, that’s where I’m happiest.” Read the full story!