Perhaps your family heritage is Scottish or maybe you’ve had a longstanding interest in Celtic cultures. Perhaps, like me, you heard a beautiful song in a language you didn’t even know existed and it touched you like nothing else ever had.

So… now you want to learn Scottish Gaelic. Dè nì thu—what will you do? In the days before the internet, it was not always easy to find a class. Fortunately, nowadays there are a number of different paths.

Nothing beats face-to-face interaction for learning another language. You may be lucky enough to live in an area where community Gaelic classes are offered and where you will meet new people in your area.

Dedicated volunteers are the force behind many community classes. Sgoil Ghàidhlig an Àrd-Bhaile, the Halifax Gaelic Society, is a voluntary nonprofit group founded in 2005 to provide Gaelic classes to the Halifax area in Nova Scotia, Canada (halifaxgaelic.ca). New courses at four levels start three times annually. Locally trained tutors teach in the Gàidhlig aig Baile (GAB) method, which involves learning to speak Gaelic through activities and patterned repetition, with no reading or writing allowed.

Norma MacLean started off by taking a Sgoil Ghàidhlig course, and became president of the organization two years ago. She said that the GAB classes “give you confidence. It becomes natural to sit there and chat. That is one of the highlights of the method: because you’re always in the moment, it does cause you to think in Gaelic.” 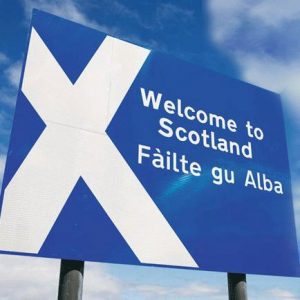 In the U.S., the Washington Gaelic language and cultural society, Slighe nan Gàidheal (slighe.com) has been offering Gaelic language classes in Seattle since the 1990s. “Zero to Gaelic,” their adult language education program, is designed to fit the schedules of busy folks who cannot attend a weekly class. The program consists of six day-long Saturday classes each year for three years. The teachers are mostly locally based fluent speakers who learned Gaelic as adults. After completing the three-year program, students can continue to take Ceum Suas [Step Up] classes in various topics.

In Scotland, many educational institutions and independent tutors now offer the Ùlpan course, funded by Bòrd na Gàidhlig and based on the principles of the Ulpan system in Hebrew and Wlpan in Welsh. The course uses games, conversation, and repetition to develop speaking skills. The Ùlpan website lists upcoming courses by location (ulpan.co.uk).

Clì Gàidhlig, the adult Gaelic learners’ society in Scotland, lists not only its own Ùlpan courses but also Gaelic conversation coffee mornings and other types of language courses throughout the country on its website (cli.org.uk).

People who cannot find a course locally can now take classes online and through conference calls.

The Atlantic Gaelic Academy (gaelicacademy.ca) conducts both local community courses in the Maritime Provinces of Canada and Skype-based courses for students around the world. AGA offers five levels; each level runs for nine months, from September to May, with 30 three-hour sessions. The course thus takes five years to complete and is designed to take students through from no ability to fluency. Afterward, students can continue with more advanced courses in which they study and discuss Gaelic literature in Gaelic.

The teachers come from a variety of backgrounds; some are native speakers from Scotland, some are fluent speakers from Nova Scotia, and others have become fluent by working through AGA’s own program and studies in Scotland.

Sabhal Mòr Ostaig (smo.uhi.ac.uk), the Gaelic college on the Isle of Skye in Scotland, offers an innovative year-long distance course aimed at total beginners called An Cùrsa Inntrigidh. The course materials are provided online, and group telephone tutorials take place once a week, with students calling in to a land line at the college.

After completing the course, students can go on to take a university-level Gaelic course at Sabhal Mòr either through distance learning or in person.

An Comunn Gàidhealach Ameireaganach (ACGA), The American Scottish Gaelic Society, lists other distance and community classes and local study groups in the U.S. and Canada on their website (acgamerica.org). 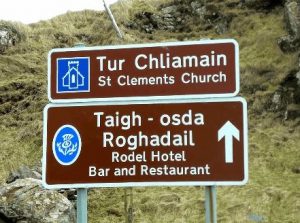 If learning something new is your idea of fun, or if you miss the camaraderie and intensity of summer camp, then you can consider taking a “destination” Gaelic course as part of your vacation travel. Every summer, residential Gaelic courses are offered in North America and Scotland in locations characterized by natural beauty and other tourist attractions. Some folks use these courses to jump in at the deep end, while others see them as a chance to intensify studies they started at home.

Although the Blue Ridge Mountains are a big attraction, Dr. Jamie MacDonald, founder of the event and one of the Gaelic language instructors, said that the attendees themselves make the week special. “The teachers from Scotland are always amazed at how interested the students are in the language and how eager they are to learn,” he observed.

Colaisde na Gàidhlig, the Gaelic college located on Cape Breton Island, Nova Scotia (gaeliccollege.edu) has come under new leadership in the past few years and is renewing its commitment to the Gaelic language as the foundation of Nova Scotia’s Celtic culture. In summer 2013, the college presented five week-long courses from July through mid-August, with two weeks for youth, two weeks for adults, and one for families.

In a typical week-long course, a student chooses five different subjects on which to focus. It is possible to put together a schedule with mostly language-focused classes, including Gaelic taught in the GAB method, Dràma, Òrain (songs), and Naidheachdan (storytelling). The instrumental music classes, while taught in English, also emphasize the importance of Gaelic in Cape Breton’s cultural traditions.

Sabhal Mòr Ostaig in Scotland is one of the most well-known destination summer schools (smo.uhi.ac.uk). The Cùrsaichean Goirid, short courses in Gaelic language and traditional music, have been running for 40 years now.

About 750 students took a SMO short course last year. One of them, Robert Forsyth from Blue Mountain in Pictou County, Nova Scotia, found that the week-long session boosted his skills, enthusiasm, and confidence, and significantly broadened his view of the language. Forsyth met fellow Gaelic students from Sweden, France, and Ireland. “I learned that Gaelic is not just spoken in isolated communities in Cape Breton or the Highlands of Scotland. It is alive and valued and spoken by many people in Canada and in countries across Europe,” he said.

Last but not least, if you happen to be fluent in Irish already, at the Irish language and culture school Oideas Gael in Donegal you can take a beginner Scottish Gaelic course—taught through the medium of Irish! 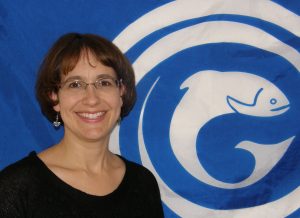 Be patient. No matter what type of course you take, it takes time to learn a language. Your progress may follow a pattern like weight loss, with each jump in ability followed by an apparent plateau. But if you put in the time and effort, then “beag air bheag,” little by little, you will get there.

Expect to sing. It’s a rare Gaelic instructor who would not be teaching you a song or two along with the grammar and conversation. Gaelic song is a valued part of the culture and a great way to work on pronunciation and vocabulary, so jump right in.

Talk as much as possible.  Learning a new language takes you out of your comfort zone, but seeking opportunities to speak to others will help you put into practice what you have learned in theory.

Listen a lot. For most people it’s difficult to find places to hear spoken Gaelic, but listening to the singing of fluent Gaelic speakers, and program on BBC Radio nan Gàidheal (bbc.co.uk/radionangaidheal), is a great help with the unique pronunciation and rhythm.

Follow your passion. Whether it’s learning how to pronounce the name of your favourite whisky, or memorizing the lyrics of a song you love, do what makes you happy. You never know where it might lead you. ~ Emily McEwan-Fujita