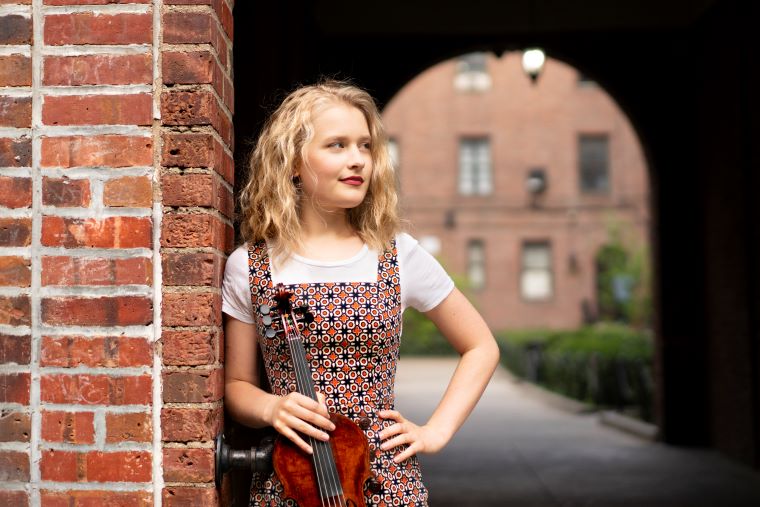 Music was destined to be a part of Irish fiddler Haley Richardson’s life.

“My parents always had music of different genres playing around the house when I was young,” she recalls via email. “My brothers and I were home-schooled, and my mom invited each of us chose an instrument to learn. I picked the violin at two-and-a-half years old and I started learning classical violin through the Suzuki method at three years of age.

“My mom saw a poster in our library for a Kevin Burke concert when I was about five. She thought I might like to hear a different genre of music on the instrument I was learning. I fell in love with the music immediately and remember telling her, ‘I want to play like that.’”

Today, the 17-year-old musician – who resides in New Bern, North Carolina when she is not on the road – considers her style to be a mix of classical violin and Irish fiddle.

“I think I have a traditional sound, but I try to add a little of my own style and personality into my music. Some of my biggest influences have been my teacher, Brian Conway, who introduced me to the fiddlers of the past. I love listening to Michael Coleman and Andy McGann, and Liz Carroll’s creativity in composing is inspiring.”

“A good song has basic elements of familiarity and repetition, but also a few surprising twists and turns to keep things interesting.”

Richardson – who plays a Barry Dudley 5-string fiddle – notes that her own creative process is a mix of inspiration and perspiration.

“When I am composing, I generally try to stray away from sitting down and forcing myself to begin writing a tune. Once I start composing, melodies come naturally, and phrases will pop into my head. Then, if I like the way they are coming together, I will work to compose the rest of the phrases to bring a tune together.”

Though still quite young, she has already enjoyed an extremely fruitful career.

“One of the biggest highlights so far has been fiddling with Riverdance this past summer in Dublin. I have also won both the Junior (2015) and Senior (2018) Fiddler of Dooney competitions, as well as several All Ireland championships.

“I have three recordings out,” she continues. “The first, Heart on a String, was done with my brother, Dylan, when I was twelve. Then I produced a charity CD to raise money for an orphanage – The Mercy Centre, in Bangkok, Thailand – called Music for Mercy, which includes tracks donated by a number of my young musician friends. Most recently, I teamed up with Canadian multi-instrumentalist, Quinn Bachand for an album called When the Wind Blows High and Clear, which I am very happy with. All of this has been so rewarding, and I especially love all of the travel I get to experience and the people I meet and perform with along the way.”

In addition to playing music, Richardson is extremely passionate about the promotion and preservation of Celtic culture and music amongst younger generations.

“A lot of young people are still interested in fiddling. If you attend any Fleadh Cheoil, there are many great young players competing and playing in sessions. I do think that attendance at live music events is an issue, though. The crowd at performances tends to be older, and parents should make a better effort to take their children to more events and expose them to live music. There is a lot being done, but much of it is word of mouth or learned about through those already involved in the community, especially here in the United States. You have to be involved in the community to a certain extent in order to be aware of all the available opportunities.”

That said, she believes that the key to success is education and exposure.

“There are a number of things that can be done, including encouraging younger generations to be more involved by getting them out to events like dances and concerts and making those who are learning about the culture – be it language, music, etc. – feel more welcome and included. Also, it would help if those who are already involved in Irish culture better understand aspects that they are not directly involved in; those in Irish dancing should know about Irish music and vice versa and everyone should support one another.”