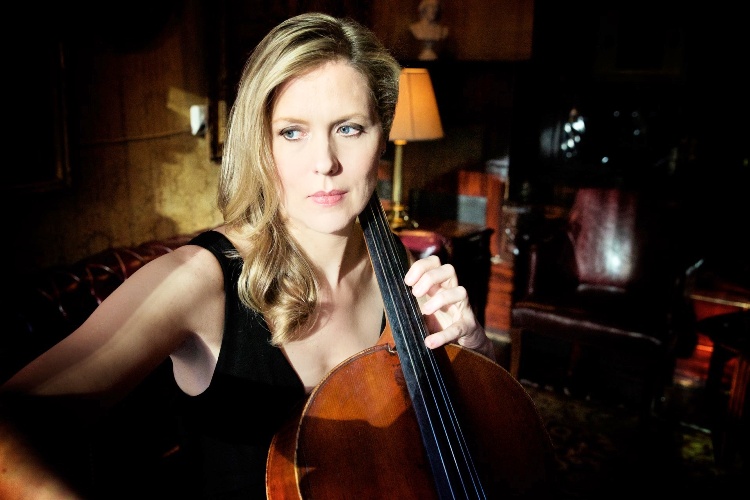 This Monday night, world-renowned Scottish-American cellist Mairi Dorman-Phaneuf will showcase Scottish and Irish melodies as part of the Broadway at Birdland series in New York City. Recently we spoke with her about her passion for her profession, and what audiences can expect at the concert.

What are your own roots?
I was born in Bearsden, Glasgow, and lived there until I was seven. My parents are both from Glasgow, and my mother’s parents lived nearby in Milngavie. We moved a couple of times when I was a child, first to Ayrshire – near where my father’s parents had retired in Barassie – and finally to Edinburgh, when I was nine. My father was the vice principal of a large independent school in Edinburgh, but in the school holidays we’d decamp to Peebles Hotel Hydro in The Borders, where he was the Entertainments’ Manager, and where I later worked as a teenager. At thirteen I was accepted to Chetham’s School of Music, a music boarding school in Manchester, England, and went on to study cello at the Guildhall School of Music in London.  After the Guildhall, I came to the University of Colorado at Boulder for graduate school, and ultimately moved to NYC in 2002. I became a US citizen in 2016.

Where do you currently reside?
I live in New York State with my husband, saxophonist, Marc Phaneuf.

When and why did you start playing music?
I come from a musical family. My great-grandfather, Charles Dorman, was a respected church organist and violin teacher; I have a copy of his violin method in my studio. His son, my paternal grandfather, Harry, was a successful classical pianist with a busy career as chamber musician and orchestral pianist, which included playing under Sir Thomas Beecham. As a young man he moved to London and formed a piano trio with my great-uncle, violinist, David McCallum Snr. (father of actor, David McCallum), which toured internationally. I recently read in a news article that Harry later toured with such greats as Paul Robeson. He also composed and published arrangements of folk melodies that are still available today. Harry’s wife, Marie Dorman (né Hall) was a professional pianist and singer. She played in the theatres of Glasgow, as did my mother’s father, Robert Marshall, a percussionist and drummer. Robert 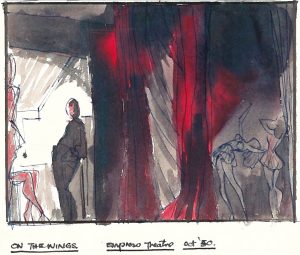 Marshall – or Gramps, as I knew him – along with working as a consultant engineer during the day, freelanced as a commercial artist and would sketch and paint during his breaks in the pit.  As a Broadway musician it’s very meaningful to me to his art, not least as a glimpse of the Glasgow theatres back in those days. My parents are both very musical, and played together as children in the Glasgow Schools’ Orchestra (my father on violin, and my mother on cello).  My father, Patrick Dorman, is also a beautiful pianist. A few years ago they retired to Worcester, England, where my father regularly plays piano for local care homes, and my mother, Aileen, enjoys playing cello in local amateur orchestras and chamber groups. They started me on the violin at age four but I guess I didn’t take well to it, so they switched me to cello when I was seven.  My first cello teacher in Glasgow was Grace Dick, who had taught both my mother, and my grandmother. I remember in that first lesson drawing the bow across the strings, and feeling the resonance of the instrument.

Are they the same reasons you do it today?
For many years it feels like the cello and I wandered through life together. I essentially ‘used’ it as a way to move to the States, which I’d been dreaming of since I was a child.  First, I was hired as a cello teacher at Buck’s Rock Summer camp, a progressive arts camp in New Milford, CT, where I spent the summers of my undergrad. Then I was awarded a teaching assistantship at the University of Colorado at Boulder, where I stayed for a Masters and a Doctorate degree. I hadn’t planned on getting a Doctorate, but it was the legal way for me to stay in the country. As a student, the only paid work I was allowed to do was in relation to my degree, so it forced me to find ways to earn a living as a cellist.  It was all about survival. I don’t know that it made sense professionally until I played my first show, when I was in my late 20s. I’ve had some amazing experiences as a classical musician, and am deeply grateful to have studied and performed at such an intense and rewarding level, but there’s something about the immediacy of the connection of popular or Broadway song with the audience that feels simple and satisfying.

How have you evolved as an artist over that time?
Once I was married and we moved just outside of New York City, I was able to start being creative by writing my own charts, something I hadn’t found the space for before. Being married for fifteen years to an incredible jazz musician has probably also had a big influence on my willingness to try new things. Marc is a saxophone doubler who also plays on Broadway. He’s written many charts for us to play together, something I’d never have imagined back in my classical days.  We play duo concerts together, and it’s one of my favorite gigs to do.

What are the challenges of the vocation?
The unpredictability. I’ve had over a dozen Broadway shows since moving to New York, and My Fair Lady is the first to last longer than thirteen months. When a show closes, you go from a steady paycheck to zero income. It can take time to build up a subbing roster (if you’re fortunate to be hired by your colleagues to sub for them), but otherwise it’s hard to make plans, either personally or professionally. Part of the reason I have so many projects this year is the financial stability this show has provided.

What are the rewards?
I’m working on this questionnaire during the long dialogue of the Ascot Scene. There’s a packed house and the audience is howling in laughter at Eliza Doolittle (currently played so brilliantly by Laura Benanti) and her desperate attempts to fit in with the British upper classes. This score is filled with beautiful songs from start to finish, and the thirty-piece orchestra plays the masterful orchestrations from the original production. I’m surrounded by phenomenal musicians, many of whom are dear friends. I feel very fortunate. 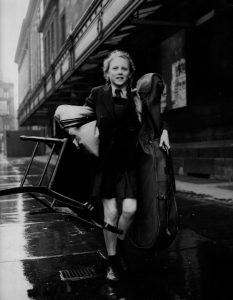 How would you describe your sound today?
I play the same cello that was bought for my mother when she was a teenager. It’s a factory German instrument, and is not very valuable. But this is the instrument I connected with as a teenager, and there’s a familiarity that is a huge part of my ability to feel confident and expressive. For me it’s all about tone, and communicating emotions through the cello, if I can.

What have been some career highlights?
I’ve been fortunate to play some beautiful shows on Broadway; Sunday in the Park was a favorite, as was The Bridges Of Madison County. For many years I’ve played regularly in Jason Robert Brown’s band, and his music is always fun and rewarding. I’ve loved getting to accompany some of my other favorite performers in their shows: artists like Christine Ebersole, John Pizzarelli and Jeremy Jordan. Any time I can play ‘chamber music’ with and for incredible singers is a thrill.

Is your creative process more ‘inspirational’ or ‘perspirational’?
I think the process of creating anything requires perspiration: whether writing a chart, booking a show, or hunting down a recording studio, it can require tenacity to create opportunities to make your own music. And like most people, I usually need a deadline… I guess the concert programs, and the charts themselves, are more inspirational.  I have to be excited about the music itself to be able to do anything I’d consider worth sharing!

What makes a good song?
I think that’s somewhat dependent on the listener? I’m most drawn to composers who use lyrical melodies over more complex harmonies. Songs that are lyric-centered over a repetitive chord structure tend not to capture my attention as much. Certainly as a accompanying cellist, my job centers within the harmonies of a song.

What are your thoughts on the current state of Scottish/Celtic music?
I’m fortunate to be joined on this Birdland concert by some of the most respected Celtic musicians, and I’ve been relying on them heavily in the process of putting it together. Guitarist Steve Gibb is the brain behind most of the charts, and I’m so grateful to him for making the concert possible. I’m taking a lesson tomorrow with the violinist/piper, Calum Pasqua who’ll also be playing with us. I know what sounds and feels authentic, but I don’t necessarily have that sound in my fingers, having rarely played traditional music professionally. This concert is very much a learning curve for me. But that’s why I put it on, to force myself to learn.

Is enough being done to preserve and promote Scottish/Celtic culture generally?
I spent so long trying to become an American, that once I finally had the passport, I found myself wanting to reach back and reconnect with where I’m from. This concert is basically an excuse to bring Scots and Irish-born folk on stage with me, so we can perform the music we love in the way that feels most comfortable… less of the American version of what Scotland or Ireland is, and something that might feel more authentic to us.  I was also honored recently to be invited to join the International Advisory Board for the Royal Conservatoire of Scotland (formerly the Royal Scottish Academy), which, for me, is way to maintain a connection back home. 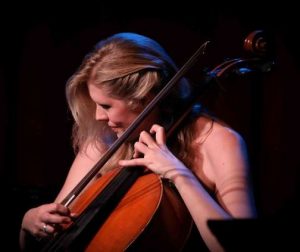 How can this be improved?
I’m excited to do my small part in showcasing these incredible Celtic performers, for this one concert, and look forward to maintaining those connections moving forward.

What do you have on tap for the rest of 2019?
There’ll be one more More About the Melody concert on May 13th, called “Rogers & Co.” featuring the music of Richard Rodgers, Mary Rodgers and Adam Guettel. Ted Sperling, the Music Director of My Fair Lady, will be the guest host, and we’ll have some guest artists including Harry Hadden-Paton, the actor who plays Henry Higgins at My Fair Lady. I’m also recording an album of original instrumental arrangements of Broadway melodies, which I’m hoping it will be released in the next year.