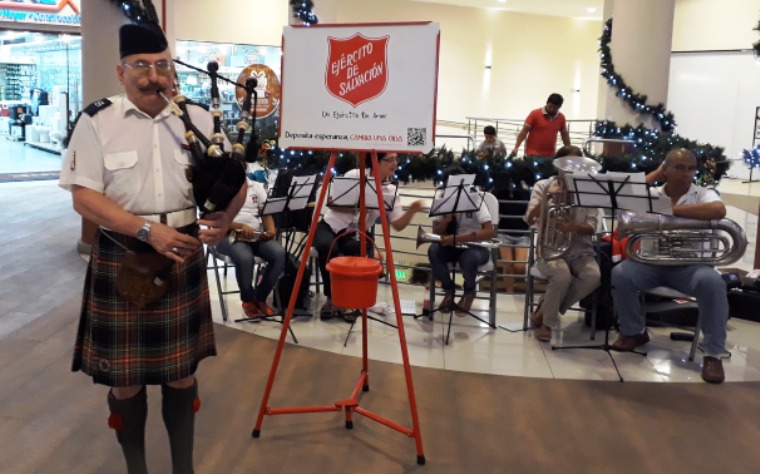 Renaud Olgiati insists that he is the finest piper in Paraguay.

“That is because I am very likely the only piper in Paraguay,” laughs Renaud (Ron) Olgiati. “It is, admittedly, a little lonely at times. Before Yahoo groups and Facebook, there was little possibility of any interaction with other pipers in this part of the world.”

Olgiati was born in “exile” in Paris and brought up in Quimper (Brittany) amongst his father’s family. He is quick to point out, however, that there is Scottish blood in his background.

“My mother’s two grandmothers were Scots from Orkney.”

He suspects that heritage is the reason why he was so taken with the sound of bagpipes as a youngster.

“The president of the Bagad Kemper – a long-established Breton pipe band – lived across the street from us. Almost every week, whenever the group had been performing away from Quimper, they would come and play under our windows when returning. I also recall enjoying the pipes during the Fete de Cornouiailles Parade each July.”

Over half a century later, Olgiati is reflective on his humble beginnings.

“I started in Rennes, south of Quimper, in 1968,” he recalls. “I took piping classes that were offered by the An Ere pipe band of Jakez Pincet.”

On the advice of Pincet, and after he had been learning for a year on a practice chanter, he set out for Scotland in search of a good set of pipes. 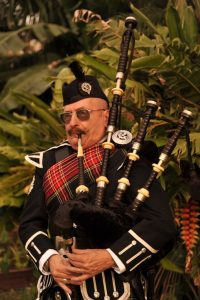 “I rode my trusty BMW R50/2 from Brittany to Bishopbriggs, near Glasgow, to visit Bob Hardie. This worthy gentleman had a waiting list for his products but – given the circumstances – sold me one of his No 4 stands of pipes for the princely sum of £40.”

For another £4 Hardie threw in nickel-silver drone slides. Olgiati went away happy, later revisiting Scotland when his work sent him to Glasgow for several months.

“On returning, I visited the College of Piping on Otago Street and continued studying with Sheumas MacNeil and Duncan Johnstone. At the end of my stay I decided that I was going to continue piping for the rest of my life and splurged £350 on an ABW silver and ivory mounted stand.”

Recently, he came across an offer on Facebook from a man who, in the 1970s, had bought the same set of pipes but had never used.

“Because there are severe restrictions on the transporting of ivory, I jumped on the opportunity to have something that I can take abroad,” he explains, adding the new-old set was $400 well spent.

Over the years, Olgiati piped with the Paris Caledonian Society and the American Legion Post during his time in Paris. In his current home of Asunción he has played for an embassy ceremony marking the 90th anniversary of Her Majesty Queen Elizabeth II.

Despite being the only seasoned piper in Paraguay, he has three piping students, two young Paraguayans and an older gentleman from Breton.

“Both my late wife and I knew Paraguay from earlier visits, and we adopted our two kids here. We decided to drop out of the rat race and find peace and quiet far away from the feverish activity of the First World. We loaded the car and trailer, drove to La Havre, hitched a ride on a container ship and 21 days later we landed in Buenos Aires. Two days of driving brought us to Asunción. That was just over 20 years ago.”

Being physically isolated from areas where piping is popular, he also has some difficulty getting pipe supplies.

“That has led me to develop my own…um, unique methodologies…as getting items from abroad takes a long time and costs a fortune in postage. I have had to do the same with moustache wax!”

He frequently plays at whisky events in area supermarkets, and for the Salvation Army during the Christmas season, where he enjoys the interest of spectators.

“I fear that Celtic culture, like many other things nowadays, is considered more like a spectator sport with fewer people interested in investing themselves in it.”

Still, he notes, that won’t stop him from pursuing his passion – even if it means doing it on his own, and on his own terms.

“And I’m still the finest piper in Paraguay,” he smiles, “even if I’m the only one!”