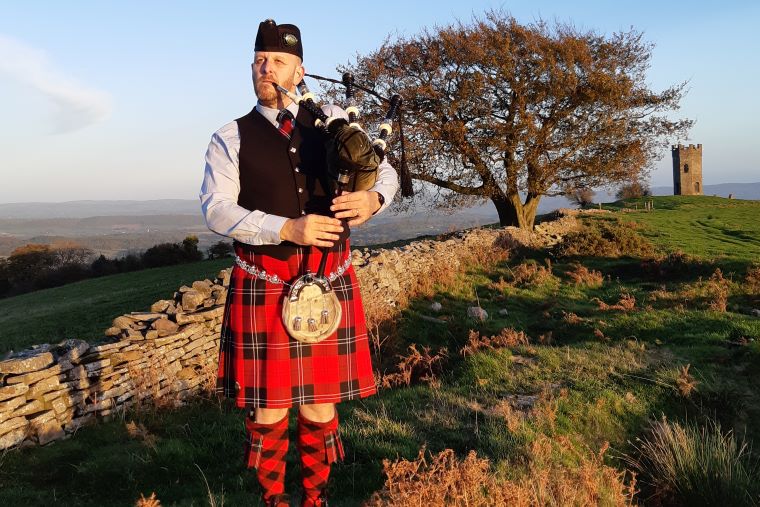 Matthew Bartlett began playing music at the tender age of 13.

“I started piping in a local Newport bagpipe and drum band,” he recalls via email. “At that time, we were young and inexperienced musicians, but we were keen to learn and enjoyed bringing those unique sounds to South Wales where many people had never heard the skirl of the bagpipes before.”

Over time, the band grew in both size and scope.

“I remember a quote from a one of our practice books that stated ‘To the make of a piper go seven years. At the end of his seven years one born to it will stand at the start of knowledge and learning a fond ear to the drone he may have parley with old folks of old affairs.’ This quote remains with me today. I still have many things to learn about this honourable instrument.”

As a young adult, Barlett opted to leave his budding music career behind. Then, in 2002, he again picked up the pipes when a friend asked him to play at a wedding.

“Reluctantly, I dusted the cobwebs off my pipes and blew life into them. I was incredibly surprised that, despite years of neglect, they still sounded strong. That’s the thing with bagpipes – they do need a lot of care and attention to keep them sounding at their best.  So, I piped at my friend’s wedding and, despite many years without practice, received a wonderful reception. It was then and there that I decided that I decided to share the sound of the bagpipes by offering my services to pipe at weddings across South Wales.”

Today, plying his trade with a set of Wallace bagpipes, Bartlett is known as “The Welsh Wedding Bagpiper.” His distinct style of playing blends the sounds of Scottish music with the sonic soul of his home country. 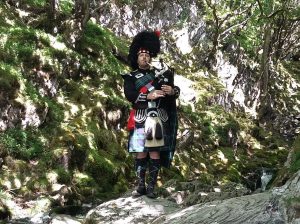 “I tend to play many of the familiar and traditional Scottish bagpipe melodies at weddings, including Scotland the Brave, Mhari’s Wedding, The Skye Boat Song, and so on. I also wanted to offer something unique as a piper based in Wales, and so I learned a few Welsh tunes, including Calon Lan and Myfanwy. This allows me to bring a varied Celtic flavour to all occasions.”

“There are also times when I am asked to pipe as a mark of respect for Scottish or Celtic relatives who are no longer with us and were not able to be with relatives and friends at the wedding,” he continues. “And the emotions that are evoked in others by the sound of the pipes during those moments are perhaps the most rewarding part of doing what I do.

“I remember, on one occasion, piping alone in the hillsides of Wales and I became aware of a gentleman in the distance who was motionless as he listened to the sound of the pipes. After a short while he plucked up the courage to walk over to me, his eyes wet with tears as he spoke, and told me that the tune I had played, Amazing Grace, reminded him of his late father and the emotions had just poured of him hearing this familiar tune once again.

“The bagpipes are certainly an instrument that do not like to be ignored – they demand an audience’s full attention.”

Although he acknowledges that the vocation can be an expensive and emotional endeavour, Bartlett believes that the highlights are well worth the investment.

“Every year I am invited to pipe at new and exciting venues across South Wales and beyond. Over the years I have played at the Royal Albert Hall, many of Wales’ historic locations, including Cardiff Castle, Mannorbier Castle, Castel Coch and Caerphilly Castle. I have even piped in the middle of the Seven Bridge crossing over the river Seven on the border of England and Wales. There are so many highlights.”

The final moments of 2019 were memorable for Barlett, who was honoured to perform the Auld Lang Syne at the 2020 Hogmanay Party. With a number of appearances and shows scheduled for the coming months, he anticipates 2020 to be equally rewarding.

“I have a full slate of weddings, birthday parties and anniversaries on the agenda.”