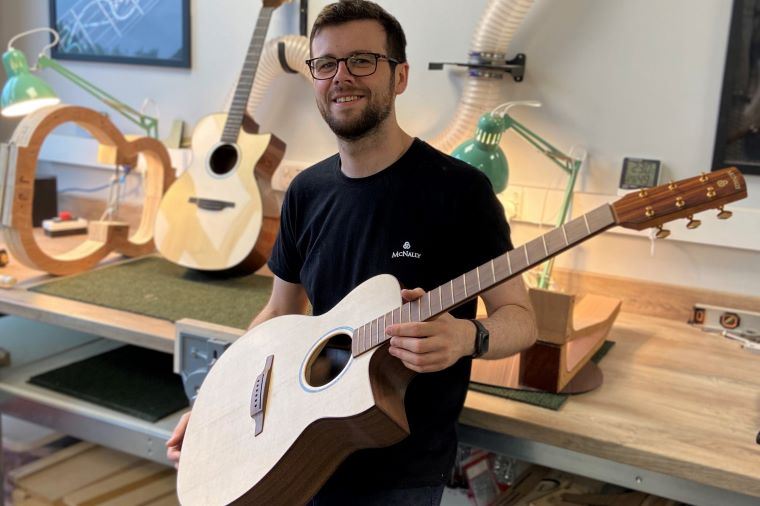 When Ciaran McNally started playing the guitar as a teenager, he would tinker with and repair the six-stringed instruments. Thus, it was only natural that – in due time – he would begin constructing them himself.

“The natural progression from there was to try and make my own parts instead of buying them,” McNally tells Celtic Life International over email from his home office in Armagh, Northern Ireland. “I started a guitar-making evening course in Belfast, with the intention of making a Les Paul-style electric. I ended up making an ‘OOO’-style, acoustic and have not made an electric since.”

After earning a diploma in Musical Instruments at London Metropolitan University, McNally has been selling his handcrafted guitars – be it as an employee of another company, or on the side.

“I officially registered as an independent company in October 2019. My main aim is to make guitars that are inspiring, beautiful, and high quality. While I recognize the prices are premium, they are at the affordable end for boutique instruments. This is something I work hard to achieve, as I would like the guitars to be as accessible as possible, particularly to working musicians.”

McNally’s style of construction is unique; an order starts from one of five body shapes, with a list of options and upgrades the customer can choose from to personalize it to their liking. Don’t expect any wild flourishes, however, as he likes to keep it simple, eschewing fancy styles in favour of robust sounds.

“I am not particularly interested in some of the ‘high-art’ guitar-making trends of asymmetric rosettes, outlandish guitar design, etc. I am not trying to reinvent the wheel, but instead make high-quality instruments that people will hopefully love, be inspired by and feel a strong sense of value towards.” 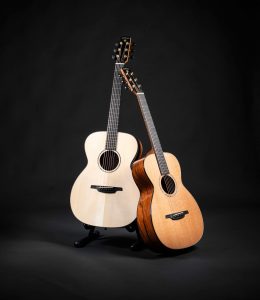 McNally explains that what sets his guitars apart from the competition is the unique combination of American and Celtic guitar-making styles that he employs. He doesn’t delegate, either – a McNally Guitar is, quite literally, a guitar made by McNally.

“As things stand currently, I am the only person working on any part of a McNally guitar,” he notes, adding that the primary factor for choosing between traditional or more modern guitar-making methods is whatever produces the best sound. “I also spray my own guitars in-house, which is something I believe in strongly, despite there being a growing trend to outsource this. For me, the finish aspect of the process is about 25 per cent of the build time. I wouldn’t even entertain the thought of handing over control of such a large part of the build, quality, and character of the instrument to someone else.”

Along with making them to custom specifications, the company’s most popular models – the “Foundation Series” – often find their way to premium guitar dealers around the world, eventually making their way into the hands of musicians.

“There is also the ‘conversion’ that takes place; someone goes into a music store not intending to buy one of my instruments, but tries one, and out they go with it.”

McNally considers himself lucky that the worldwide COVID-19 pandemic hasn’t affected his business – if anything, he has picked up more customers in recent months, as musically-Inclined people have been turning to their instruments to keep busy in isolation.

Of greater worry is the impact the pandemic is having on the live music scene.

“I am more concerned about the stall in the live music industry – partly because I just miss it, but also because it plays a big role in marketing guitars.”

He believes that once the world returns to some sense of normalcy, the demand for guitars and those who play them beautifully will return with it.

“Guitars certainly aren’t going away anytime soon, and I am encouraged by a noticeable uptake in people interested in buying from local makers. I am hoping to reach more guitar players in Ireland over the next few years by connecting with and supporting the music industry here.

“I have a few new models launching soon, and I will continue to work on fresh features and options that fit within my brand. Ultimately, the goal is to keep improving the guitars, connect more with music and musicians, and enjoy what I do.”