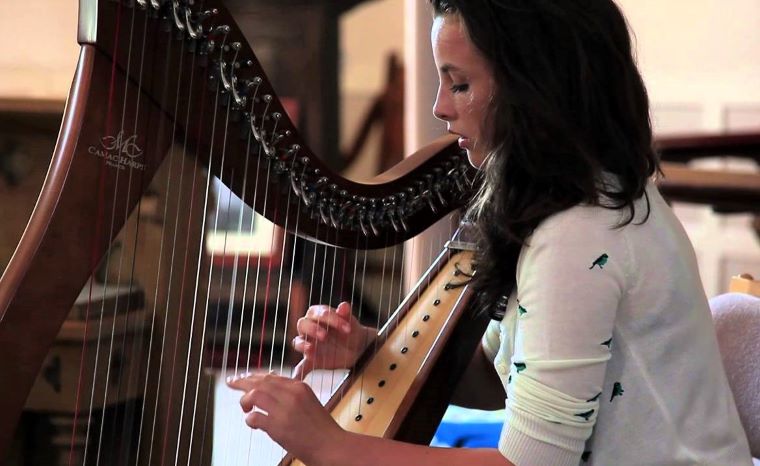 Mera Royle makes her home in The Isle of Man, a small country with a big music scene. As she notes, the Isle – situated in the Irish Sea between Ireland, Scotland, Wales and the English county of Cumbria – is the geographic heart of the Celtic nations.

“There is a strong sense of culture and identity on the island and the music and language are very similar to the Gaelic traditions in Ireland and Scotland,” shares the songstress, who was born in Manchester, U.K., but relocated to the Isle of Man with her family as a toddler. “A Manx language-speaker could be quite easily understood by Gaelic speakers in both Ireland and Scotland.”

A professional harpist and violinist, Royle has been playing music for as long as she can remember. “One of my earliest memories is of my uncle teaching me how to tune a ukulele, and I recall not being able to put it down until I had learned how to do it.”

She started “properly” playing instruments once she began school, where music continues to be a core of the Manx curriculum.

“I began violin when I was eight and I had this hilarious teacher who was completely bonkers, but he really changed how I thought about music. He taught me how it isn’t something you do – it is something that comes from inside of you, and your instrument is just there to help you get it out. More than ten years later, I still think he is one of my biggest inspirations.”

Royle was introduced to the harp by another teacher, Mike Boulton, who coordinated the school’s folk music club. “Playing the harp was something that I enjoyed right away, and I was lucky because a few of my friends in the folk club were really great musicians and we would learn tunes and play them together. I performed with them in a whole range of concerts – from afternoon tea parties, to church hall events, being involved in the island’s music festivals and being allowed to work with visiting musicians – plus playing at the country’s main halls, like the 2,000-seat Villa Gaiety Complex.”

With the support of the Isle of Man Arts Council, Royle was selected for a monthly class with Scottish harpist Rachel Hair. This helped further hone her harp skills and overcome new musical challenges. She hopes to continue learning from Hair, even now that she is attending England’s Newcastle University, where she is studying folk and traditional music.

She currently resides in the village of Maughold – a rural area in the Isle of Man’s northern region. The colourful, natural atmosphere offers her endless musical ideas.

“I named my first EP ​The Ballaglass Set ​after a glen that me and my mum used to go to after school to walk the dogs.”

Last year, Royle won the BBC Radio 2 Young Folk Musician of the Year Award, which forced her to confront one of her fears – performing in front of a crowd.

“I have found there really is no better way to learn this kind of thing than on the job when you are thrown in at the deep end. I played at Cropredy Festival last year and had to perform in front of about 10,000 people, which certainly made me think a lot about my presence on stage and what I needed to do to make sure the audience was as absorbed as possible.”

Those audiences range from elderly women “doing their knitting in the front row” of a small church hall, to the likes of Eliza Carthy and Mark Radcliffe.

“The older I get, the easier it is to understand that the audience is there to enjoy the music and that it is best for me to just enjoy it as well and not worry too much. However, the pressure is always on to play well whatever the occasion.”

Royle’s latest EP, Woven, is now available on Bandcamp. It includes two tracks – Moon at Dawn and Deep in the Earth – which she composed for films, along with her favourite track, a take on Mike Oldfield’s Tubular Bells, and four other tunes.

“Going forward, I am committed to learning more about my craft – especially the art of composition – and to my evolution as both a player and a performer.”