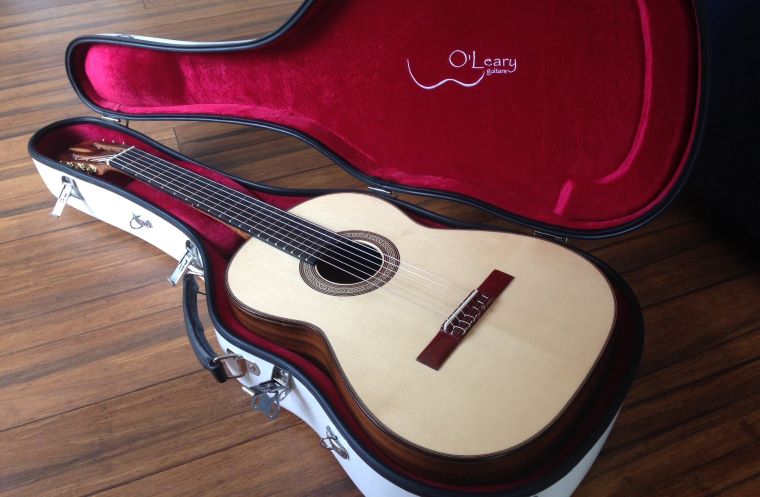 Michael O’Leary spent three decades of his life in the motor industry working as a production manager. In 2002, however, he went back to his musical roots.

O’Leary was born to a creative family of Irish musicians in the quaint town of Graiguenamanagh, Ireland – home of the medieval Duiske Abbey National Monument. “We played music together regularly and I learned to play several instruments, without any formal training,” he recalls. “My father mainly played guitar and we were all part of a traditional Irish band in Graiguenamanagh back in the ’60s.”

Unsurprisingly, O’Leary’s own son, Alec, took to music as well and pursued a career in classic guitar. “As his studies progressed, his requirement for the ultimate instrument launched me into creative mode with the enthusiasm to develop a better concert guitar,” explains O’Leary. “With my background and several generations of inherited woodworking tools, this development of the concert guitar was a natural progression. I had a B.Sc. Honours Degree in Design Technology and a Diploma in Design & Innovation which included much in-depth study into modern materials. As such, and after leaving his previous career, it made sense for him to apply his other skills and passion to becoming a luthier.

“On my return, I immediately began the process of designing a new instrument that would offer more for the performer in terms of volume and tonal characteristics. My research into each aspect of instrument construction led to an incredible new guitar.”

As Spanish guitars are traditionally “parlour instruments,” intended to be played for smaller audiences, it was difficult to find an acoustic Spanish guitar that was both “tonally sweet” and loud enough for a concert setting. “With my history of engineering, design and innovation and a unique insight into player’s requirements and a passion for music (and a little madness) I developed a new type of guitar that was an instant success.”

Alec once again took to the family business, helping his father produce guitars in their County Carlow workshop. “Our initial design has been refined over the years with constructive discussions and feedback from some of the world’s greatest players,” says O’Leary. Sérgio and Odair Assad, David Russell, John Williams and Berta Rojas have been among the company’s clientele. 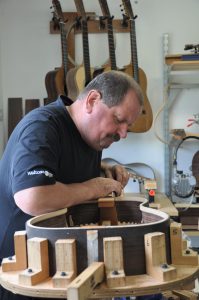 They make guitars for non-professional musicians as well. “We have collaborated with new suppliers to provide our customers with a unique selection of woods for their new instrument. Over the past 10 years we have also made progress in reducing our carbon emissions and now all our wood supplies are from environmentally managed forestry.

“We make classical guitars that are aesthetically remarkable and tonally profound for a world-wide market.

“I don’t really like to call what we make a ‘product’ as such, but it is more an expression of an artistic achievement. The instrument that we make is made with care and passion to a unique and personal design that reflects our belief in past traditions and future possibilities.”

Alec and O’Leary work together on each instrument. In addition to quality of craftsmanship, the pair must be mindful of keeping materials in a controlled environment. Moisture content and temperature are two key factors for the durability of the finished guitar. In the end, the hard work pays off when they’re able to hear the instruments for the first time. “It never gets old,” smiles O’Leary. The father-son team has also been organizing The Guitar Festival of Ireland for more than a decade.

As for the future, they plan to launch an O’Leary steel-string guitar, thus opening to a whole new set of clients. The key, though, is to stay true to their commitment to quality. They currently have no need to advertise in any traditional way, as their guitars tend to speak for themselves. “People can hear them played by amazing musicians online and in live performance all over the world. Most of our enquires originate from experiences like this.

“Our plan is to maintain our unique position globally which for us means attention to detail in the creation of every instrument here in the workshop. This means that it is necessary that every inlay, every joint, every carving that we do is consistently perfect. This will ensure that our order book remains full for future generations.”