Paddy Moloney and the Power of Music 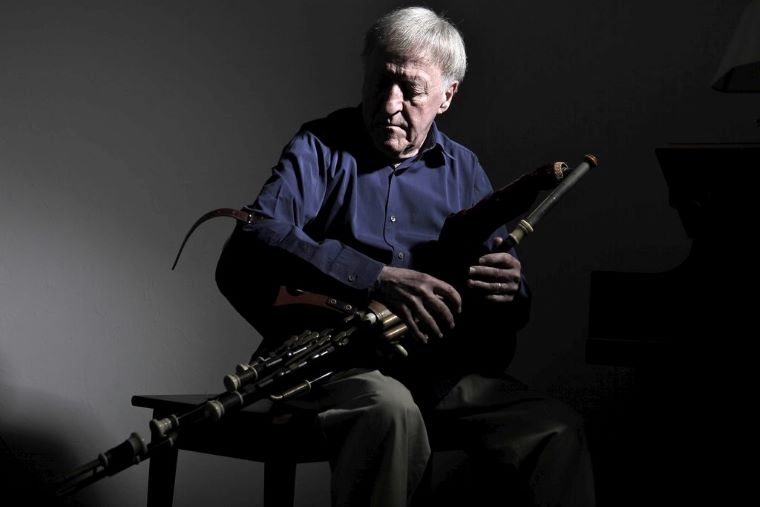 Paddy Moloney is a titan of his industry – a musical giant who has spent a lifetime rubbing shoulders with the likes of royalty, religious icons, world leaders, business czars, captains of art and culture, rock stars, celebrities and more.

Though slight of frame with a slight hunch, the Dublin-born musician, composer, and producer – who also happens to be the founder and leader of the Irish musical legends The Chieftains – casts a big shadow.

Despite his grand standing amongst his musical peers, the 81-year-old is humble and soft-spoken, charming and cordial, warm and welcoming.

“Hello, how are ya’ then?” he asks, taking my hand in his as we sit down for an afternoon chat at The Arms Public House inside the Lord Nelson Hotel in downtown Halifax, Nova Scotia.

The server comes by to take our orders. Coffee with milk for me. Moloney looks at his watch, smiles slyly and says, “Well, it is after 12pm, so a double Jamesons, straight-up please,” before turning to me and adding with a giggle, “You know, I got into the music game for the free drinks, and I’m damn well staying in it until I get some.”

We make small talk as we await our drinks.

“Aye, I have been here several times,” he nods, speaking of Atlantic Canada. “A lovely part of the world. Fine folks. There’s a few Irish about. Lots in Newfoundland. I don’t make it over this way often enough, but when I do it is always a grand time; good food, good drink and lots of great music.”

“That could be the story of your life,” I reply with a smirk.

“Ha, indeed,” he laughs. “Well, that is not so bad then is it? I am quite blessed that things turned out as well as they did. It has been quite a ride.” 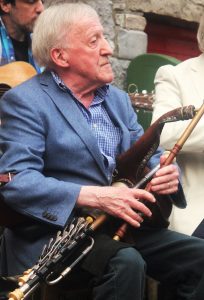 That journey began at the age of six, when Moloney’s mother gave him his first instrument, a tin whistle. In time, he would pick up the Uillean pipes, the button accordion and the bodhran.

“My mother had no idea what she set in motion all of those years ago. If only she could see me now!”

“Actually, I believe that I always had that music in me, even as a youngster growing up in Dublin. Once I had my hands on those instruments, it was like magic – the melodies just started pouring out of me.”

The rest, as they say, is musical history; in the early 1960s, Moloney would join his first band, Ceoltóirí Chualann, with leader Seán Ó Riad. That group would form the basis for The Chieftains, who debuted in the fall of 1962. Over the next half-century, the group would release dozens of albums and play thousands of concerts for millions of people around the world.

“We were kids,” he recalls with a twinkle in his eye of those early years. “Back then, we were just pleased to play for pocket money or a pint of Guinness. Don’t tell anyone, but we would have done it for free! We really had no idea what we were doing or how long it would last. We still don’t. These days, we might have a bit better understanding of our instruments, and of what music is and can be, but we are still just winging it for the most part.”

Moloney’s modesty is both authentic and endearing. Despite an epic, larger-than-life resume replete with an array of awards, accolades and achievements, his demeanor is one of honest and hard-won humility.

“We have had the good fortune of making a living doing what we love, what we must, and we have traveled around the world doing it. All of these years, all we have been doing is carrying the message of music and, hopefully, making some sort of difference in the lives of a few folks.”

Meeting people, he notes, is still the best part of the gig.

“We have always taken the time to chat with fans and friends. That hasn’t changed since the very beginning. Everyone has a story, some comic and others tragic. We all share those things in common, and it is the music that brings us together in celebration and in grief.”

Many of those close encounters have been with fellow musicians. I begin dropping names, and Moloney willing replies.

Mick Jagger; “Very smart, and an extremely hard worker. He gets a bad rap for being a good businessman, but he knows music as well as anyone – especially the blues.”

Paul McCartney; “A brilliant songwriter and a natural talent. A living legend with no ego whatsoever.”

Sting; “A genius, really. He knows what he wants in a song and spares no expense or effort in bringing it to life.”

Stevie Wonder; “He is a teacher at heart. I learned so much just being around him, and some of those sessions are among my most memorable.” 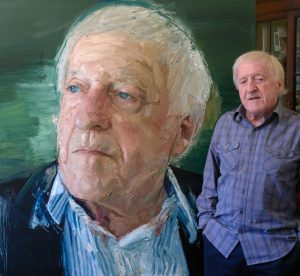 Bono; “One of the funniest guys I have ever had the pleasure to know, and one of the most passionate about music.”

Van Morrison; “How can you not respect someone so dedicated to his craft?”

Bob Dylan; “Unique – a one-off. There is nobody else in the world like him, and there never will be.”

“I think that what has kept us around for so long is a curiosity about where we can take the music.”

“We never hung out with those folks just because they were celebrities or to party – we had work to do; songs to write and record and perform. There may have been a few drinks along the way, surely, but it never got in the way of the music.”

In an era when excess got the better of so many of his musical peers – from Jimi Hendrix, Janis Joplin and Jim Morrison to Phil Lynott, Kurt Cobain and Amy Winehouse – Moloney has kept his priorities straight and his house in order.

“Oh, my wife gets all of the credit for that. And my three children. Without them, I’d no doubt be homeless.”

“Ah yes,” he laughs. “A bit of a miracle, really, that one. An brilliant musician and band leader in his own right, and I have never known him to turn down either a drink or a session. He just loves to play.”

As if the list of rock stars and musical dignitaries weren’t long enough, there were mainstage performances for the likes of Queen Elizabeth II during her first ever official trip to Ireland in 2011 (“Gracious, as expected…”), and Pope John Paul II in 1979 (“Great sense of humour, and a keen ear for a melody…”), where the Chieftains performed for over 1 million people at Phoenix Park in Dublin. They were the first group to appear at the Capitol Building in Washington D.C. (1983) and – that same year – atop (!) the Great Wall of China. Another wall, this time in Berlin, was the site of a show with Pink Floyd frontman Roger Waters in 1990. 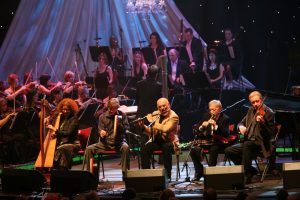 “It has been incredible to witness modern historical events first-hand, with my very own eyes. To experience these things, to be a part of them, is so very humbling. For me, they have served as reminders of how truly small we are in the grand scheme of things, but how big a difference we can make.”

In 2002, Maloney and his bandmates took part in memorial concert in New York City for the victims of 9/11.

“I was invited to Ground Zero, where I played a lament for the (rescue team) on my little tin whistle. It was then and there that I realized that the world we live in, the one I grew up in, would never be the same, and that – more than ever – music was needed to help heal our wounds…that we, as a band, needed to keep going and try to reach as many people as we could in the time that we had left.”

I remind him that “music has charms to sooth a savage breast…” – a phrase taken from the poem The Morning Bride by 17th century English playwright and poet William Congreve.

“Music has worked wonders for me through the years, and hopefully ours has done that for others as well.”