When you read Sally Rooney’s hit novel Normal People—about an on-again, off-again couple named Marianne and Connell—and imagined Connell in your mind, I’d be willing to bet that you were picturing something close to Paul Mescal. The solid athlete’s build. The indifferent mop of brown hair. The gently rugged nose and brooding blue eyes. Never has an actor felt so faithfully cast as a literary character since Colin Firth’s Mr. Darcy strode sodden out of a lake in the 1995 Pride and Prejudice miniseries. Mescal, 24, stars opposite Daisy Edgar-Jones in Hulu’s Normal People, a 12-episode adaptation of the book now streaming in the U.S. This is the first television role for the young Irish actor after a career comprised solely of theater work and, before that, years playing competitive Gaelic football. (A broken jaw put a swift end to that.) Mescal also recently signed to Creative Artists Agency, signaling more high-profile stateside work to come. When we caught up with Mescal in a Zoom call, he was alone in his London apartment, his roommate India Mullen—who plays the character Peggy in Normal People—having vacated the previous day. We talked about the pressures of portraying a character so many people feel so intimately attached to, slipping between the worlds of sports and acting, filming all those sex scenes, and rewatching True Detective in quarantine.

You read Normal People just a few days before going into your audition. What was your first impression?

There characters are people that I know and I recognize. They’re either me or they exist within my friend circle. That was both exhilarating and slightly terrifying because when you recognize it, you feel the slightly bigger onus to represent it accurately. So, it was a mixture of going, “Oh shit, I really understand how this person’s brain works.” And then going, “If that’s the case, I better do a good job.”

And readers are so invested in the characters. With that in mind, did you feel pressure in portraying Connell?

Absolutely, because anybody who reads the book has a very clear idea [of who Connell is]. And normally any person that I ask, they always reference themselves to the characters. And I am going to be the visual representation of this imagined character for a lot of people. So there definitely is a pressure with that. I didn’t feel that so much when we were filming. I feel it now in the lead up in the final few days before it airs. 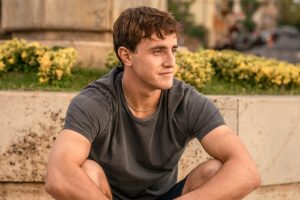 How much was Sally Rooney involved in working with you?

I met her for, I think, two cups of coffee before everything started. After I’d been cast, I reached out and was like, “I’d love to meet you and say hello and for her to put a face to a name.” And I remember going to the first meeting and being like, “Oh, I have no questions for her. I have nothing to say. She answers all the questions that I might have about the book.” But it ended up being a lovely chat and she gave me her blessing and thought that I was a great fit. That gave me a huge amount of confidence going into filming.

You played football for many years before becoming an actor. How did that shift happen for you?

I played Gaelic football since I was tiny, and that was kind of the way that I wanted to go. And then when I was 16, we did a school musical. We did Phantom of the Opera. I fell in love with it. I’ve never gotten a buzz or a high like that ever in my life. I’d been chasing that to some degree. But I never saw it as a valid career choice. When it came to applying for colleges, I was putting down law and arts and things that would support playing Gaelic football. The closer it got to being a reality, the more I rejected it. So I quickly applied for drama schools, but there was only one that I wasn’t late for in Dublin. I applied and got it. I still played football in first and second year of college, which wasn’t allowed, but I kind of kept it on the down low. Then I got my jaw broken two days before starting my final year.

Did you mourn having to leave football behind or were you ready to move on?

Absolutely. It’s something that has been a massively formative part of my life and something that has taught me lots about acting in terms of self discipline and being ready and being able to capitalize on opportunities. In a dream world, I’d love to go back and play with my team. But as long as work is kind of busy, I don’t think I can do the two at the moment.

Did you ever find it difficult to go between the worlds of playing football and acting, in the same way that Connell struggles with being a jock in high school and then part of the English program in college?

No, I think because culturally they’re two very different institutions and they have two very different sets of values. But, personally, I find the teams that I’ve played with feeling very similar to crews and casts. I’m a big believer in [the idea that] if you’re a team player, you can get so much more out of a project, so much more out of playing sports. But culturally they’re very different. One, for example, is particularly male-dominated and the other isn’t, and that comes with its own kind of intricacies. You grow up kind of spending your evenings after school being surrounded by 30 or 40 guys your age and that’s really fun. I really liked the camaraderie that comes with that. And then to go into a thing where you’re having bigger, broader discussions about gender politics and life. They’re not particularly conversations that you would have in a dressing room after a match.

The show, like the book, has several intimate scenes. How did you go about getting comfortable with those?

We had an intimacy coordinator on set for all of those scenes and we had a day’s rehearsal with her before we even started filming. That takes a huge amount of pressure off when you come to set and you know, “okay, we’re going to have to be naked in each other’s company.” It’s a really bizarre construct when I say it, but when the right structures are put in place, and you feel safe and you feel like you’re in a scene that is furthering the narrative and is a hugely joyous moment in both Connell and Marianne’s lives, it makes it much easier to play. 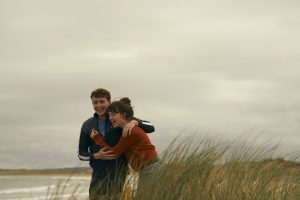 Are there any parts in Connell’s storyline that you enjoyed playing the most?

It’s so much easier when they are happy together, and those moments are actually few and far in between. I don’t think they’re ever completely content. Stuff just wouldn’t be interesting. I also found I was always really excited … excited isn’t the word to use, but I really anticipated getting to play Connell at his darker, more depressed states because I think it’s really well observed by Sally. We definitely see when men feel this stoic responsibility not to express emotion, how damaging that can be.

I think from your own perspective, you see how you have responded to relationships both for the good parts of it and the not-too-good parts. And I think whether you’re conscious or not of it, it imbues your romantic compass. Having played Connell in context with Marianne, it’s definitely opened up my mind to the sense that real relationships, whether you’re together or not, exist very presently in your life, day to day, even if you’re broken up.

This is your first television role after years of theater and you recently signed to CAA. Who are the actors who you look up to, or whose careers you look to as a model?

I’m a huge fan of True Detective season one, I think I’ve seen it three times now. Re-watched it again during quarantine. I’m obsessed with that kind of … I call it filmmaking, because it’s great actors stepping up to the plate, matching the writing. And the whole aesthetic of the show. When you see that kind of symbiosis happening on your screen, it’s the most satisfying and exhilarating and also terrifying because that’s the level that you want to constantly be out or want to be engaged with and that can sometimes be scary. Then you look at films like Little Women where you’re looking at Saoirse, Florence, all young actors stepping up to the plate and smashing it consistently year after year after year, and it’s really, really exciting. I love seeing people my age or my peers doing amazing work because it invigorates you.

Besides True Detective, what else are you watching and reading in quarantine?

I’m reading Patti Smith’s Just Kids. I’m kind of rationing myself through it because I don’t want it to be over. I watched Kindergarten Teacher last night on Netflix. I rewatched Euphoria, True Detective, simply because it takes up more time.

I know like a lot of things are up in the air now because of coronavirus, but do you have any upcoming projects you can tell us about?

Close to one of them, but I can’t. So hopefully in the next few weeks I’ll be able to scream from the rooftops.