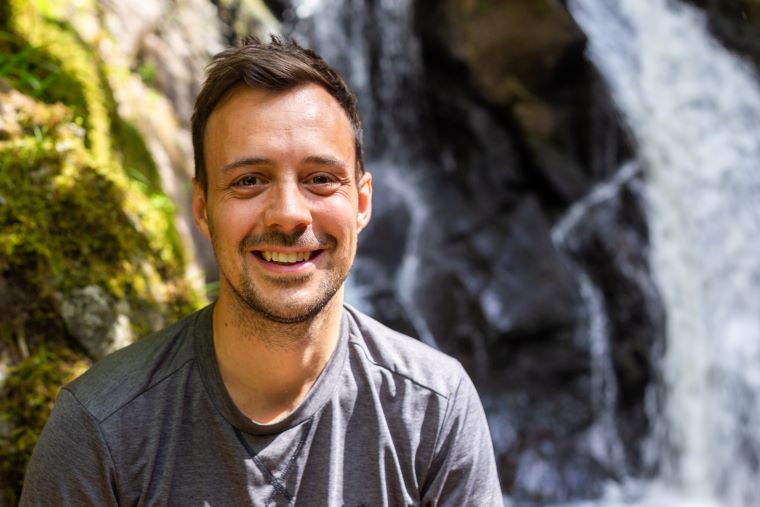 Philip Stewart is a thirty-two-year-old rising star on the Scottish landscape photography scene and is a name to watch. His images adorn homes in over thirty countries around the world, and although most of his photographs hang on walls in the USA, U.K., Australia and Canada they can also be found in homes in such diverse locations as Albania, Puerto Rico, South Korea, Hong Kong, Iceland, Finland and more. It is an impressive record for someone who turned professional only nine years ago and, by his own admission, was very much a beginner in a field dominated by some well-known names.

His foray into the world of photography began at the age of sixteen when he opted to study Higher Photography while at school. That was back in the days when digital photography was in its infancy and the coursework involved working with film cameras and learning darkroom techniques. With limited resources for this kind of specialist learning, the school had a partnering arrangement with a local higher-education college, and it was there that Stewart learned the basics of photography as an art form.

“Working with film cameras, photographic papers, chemicals and enlargers helped me to understand aspects of creativity that I still hold dear today. The methods may now be different but the desire to achieve certain artistic results is grounded in the learning of these early years.”

Stewart’s last project at school was a landscape photography assignment and he opted to create a portfolio of images taken in the stunning setting of Scotland’s beautiful Loch Lomond and The Trossachs National Park – magnificent mountains, valleys, forests, rivers, lochs and waterfalls. His final submission resulted in him gaining a grade ‘A’ in his Higher Photography exam, although it would be some years before he returned to explore the medium in earnest.

After leaving school he undertook a course in computer studies at the same college where he had studied photography. Although he was now studying computer science, he used his spare time to explore the emerging software programs for digital photographers that were coming onto the market. He also acknowledges that there were other influences from home that would shape the direction of his career in later years; his father was an architect and a keen amateur photographer, while his mother worked in the sales department of a large housing developer. Together his parents designed two of their own family homes and – as a child often found wearing a hard-hat on the building site – Stewart watched the process, learning about space, light and colour. This would later translate into a wider understanding and appreciation of urban spaces and streetscapes. 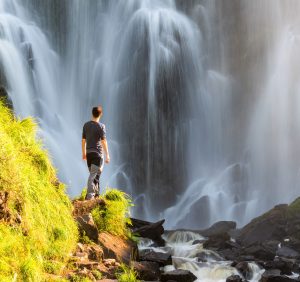 After leaving college, the need to make a living other than through the sporadic income stream of an unknown landscape photographer resulted in him working for a small graphic and web design company. This was followed by a manual labouring job in a warehouse and, later, employed as a lab technician for an ink manufacturing company. From these jobs he was able save enough money to buy his first digital camera in 2009.

For Stewart this was a defining moment and one that he believes switched his life from the humdrum existence of mundane jobs to a true appreciation of the great outdoors.

“My life had become dull and routine, my mental health was suffering, and I was drifting into the only form of escapism I knew at that time – spending evenings and weekends drinking with friends in pubs. I longed for more and the ability to buy that first camera opened the door to a new world.”

From that moment onwards all his free time was spent taking photographs. He would get up before work and head into the nearby countryside to get early morning shots. After work he would be outdoors with his camera until dusk. For the first time he felt that his life now had a purpose, and he soon learned that it wasn’t just about taking photographs; it was the mental health benefits and the inner-peace and happiness that came with spending large amounts of time outdoors. Over the next three years Stewart honed his skills, artistically and technically, and built up a selection of images that would form the basis of his emerging landscape portfolio. In 2012, he decided to take the step of becoming a full-time professional photographer. It wasn’t easy, and over the next few years he earned a living by taking property photographs for estate agents. The influence of his parents’ background in architecture and property development gave him a unique insight into what constituted good residential property photography and urban streetscape photography. Soon, he garnered a reputation for the quality of his work although he continued to spend all his free time amassing more landscape images.

Today, Stewart lives on the outskirts of Edinburgh, “It provides the perfect location for undertaking property-related photography, capturing images of Edinburgh’s many famous buildings and historic streets, and providing easy access to the countryside beyond which varies from rolling green landscapes to wild coastlines.”

His favourite time of day is just before dawn when he can watch the rising sun and the shadows and colours of a world coming to life. It is a time to savour the tranquility as others sleep. 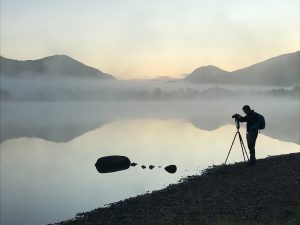 Similarly, the hour either side of dusk is another favourite, as the sun fades and the moon rises, providing spectacular sunsets and long, evening shadows. He will often be found in a tent atop a mountain or amongst the sand dunes waiting for those special moments of light. He regards Scotland as the perfect location for this type of photography. The range of photographic possibilities within the natural landscape is never-ending and the changing light and dramatic backdrops open-up countless opportunities. Other countries may offer a more stable, sunnier and warmer climate, but it is precisely the unpredictability of Scotland’s weather that makes it so exciting. For Stewart there is no such thing as bad weather – just varied and challenging possibilities. He has captured stunning images from the beaches of the Outer Hebrides to the Cairngorm mountains and most things in-between. Celtic rainforests, water and waterfalls are favourite subject matter due to the way light filters through trees or makes rivers and lochs sparkle, and also as this is where most wildlife can be found.

There is nothing more beautiful than taking photographs surrounded by the sounds of nature. He believes it is what gives life to his images. “Sometimes I look back at my photographs and I can hear the deer bellowing from the hilltops, the birds tweeting in the trees or the fish jumping in the loch. I don’t regard my photographs simply as static images – they are living moments in time.”

To date, Stewart has been awarded first place in the Scottish Landscape – The Land category of the Scottish Nature Photography Awards and has been shortlisted or commended in this competition five times previously. His images have been commended, published and exhibited in the Scottish Landscape Photographer of the Year competition and in the U.K. Landscape Photographer of the Year competition. His photographs have featured in several newspapers and magazines as well as the 2020 and 2021 calendars published by The Scotsman, while his Instagram account has been highlighted by both The Scotsman and Edinburgh Evening News newspapers as one of the ’21 top Scottish Instagram accounts to explore in 2021’. Presently, he is working on a book illustrating his first ten years in photography and is also preparing for his first solo exhibition having exhibited previously with the Society of Scottish Landscape Photographers. Many of his stunning images can be found on his website and via his social media accounts. ~ By Tom Langlands