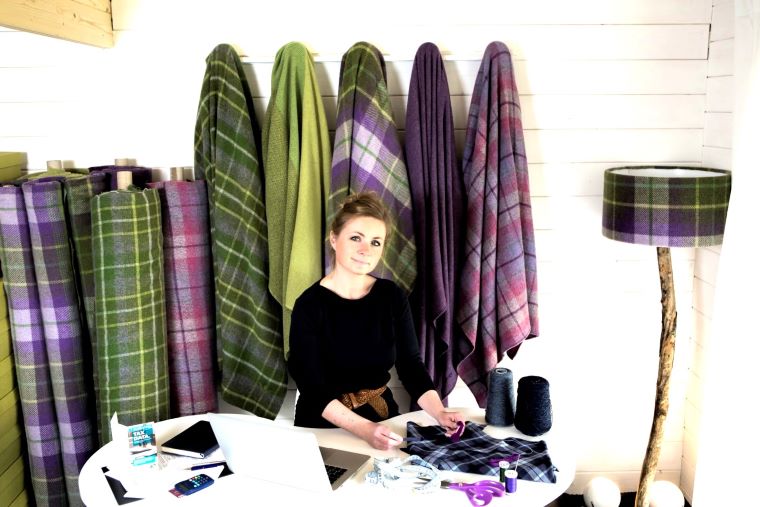 Prickly Thistle founder Clare Campbell is a Scottish Highland woman on a mission.

“The paradox of the future is that it is actually the past,” she tells Celtic Life International. “We did all of this before. We don’t need to be super inventive, really. We just need to think about natural materials and buying less, buying ethically.”

Campbell has a background in accounting and says that her switch to the world of Scottish textiles was a matter of both “the head and the heart.” After grieving her brother and her father, she realized “how fragile and how short life can be.” In her mid-30s, she decided that it was time for a change.

“I’ve got this one shot, and I’ve got a longer ride than my brother, who we lost when he was 19. I have the opportunity to have a bigger impact that he didn’t have. I wanted to make that count.”

Growing up in the Scottish Highlands, Campbell had a basic understanding of tartan and what it was. However, it wasn’t until around 2015 that she “went down the rabbit hole” and started seriously looking into the industry.

“I started to relate to the whole legacy, identity and spirit of courage and passion. There were just all these amazingly powerful emotions attached to this cloth.”

After exploring the industrial landscape, Campbell realized that the traditional tartan industry had become rather small. She wanted to “add to the traditional tartan story” while keeping integrity at the forefront of her work. As such, she sought to keep her business close to home and create things in an environmentally friendly way. She also had no desire to compete with any of the existing mills. “That is why we don’t do clan tartans, per se, because that is the bread and butter of many of these mills. We were just trying to do the right thing in the medium that we have fallen in love with.” 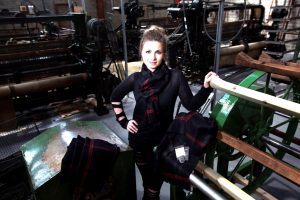 In the beginning, Campbell worked with other mills to create commissioned designs for clients. In 2017, she launched a crowdfunding campaign in hopes of starting her own mill. “I thought, ‘it’s Scotland, it’s textiles. It’s our thing. Come on, we need to do something with it.’”

The first crowdfunding venture failed, but Campbell didn’t give up: she set up a new crowdfunding goal in 2018 and divided it into smaller chunks. For example, she looked into renting a property rather than trying to build something new off the bat. Outlander star Sam Heughan even boosted the initiative on his Twitter account.

That belief soon paid off and, today, her company employs 14 staff members. During the height of the COVID-19 pandemic, all small businesses struggled, and Prickly Thistle was no exception. However, it was during this time that the company also found its niche. “We wanted to really champion and really work on that relationship that women have with clothing.”

Through zero waste design, natural fabrics (wool doesn’t need to be machine washed), and made-to-measure sizing, Prickly Thistle creates clothing with the goal of lasting longer. Its mandate also encourages people to buy new clothing no more than four times a year. But how does a business survive while supporting an overall goal of less consumption?

“It is challenging,” admits Campbell. “At the end of the day, what will be a testament to businesses like ours is that we never compromise on our values. I hope that clearly lays out to people that when you buy from a company like us, you do make a difference.”

Today, Prickly Thistle’s tartan clothing includes tops, dresses, jumpsuits, “kick ass kilts” and more. Many of the items can be worn multiple ways. Campbell compares it to going to a restaurant with a condensed menu – it is likely that the small selection will be of good quality.

“We really believe in the simpleness of our collection. One of our missions is we just sell less to more people. That is how we become a sustainable business. You buy just a couple of pieces from Prickly Thistle, and quite often, that will be enough. But you are going to be so inspired that you will tell all of your pals.”