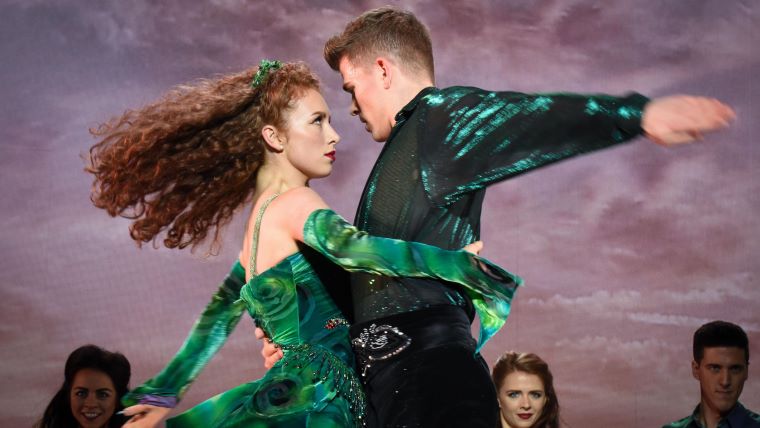 It is almost impossible to measure the impact that Riverdance has had over the last 25 years. To properly detail the iconic Irish dance and musical production’s origins and history would take hours, even days or weeks. Simply put, it is almost beyond words.

Alas, let us turn to Wikipedia for a succinct summation.

Riverdance is a theatrical show consisting mainly of traditional Irish music and dance. With a score composed by Bill Whelan, it originated as an interval performance act during the 1994 Eurovision Song Contest, featuring Irish dancing champions Jean Butler, Michael Flatley and the vocal ensemble Anúna. Shortly afterwards, husband and wife production team John McColgan and Moya Doherty expanded it into a stage show, which opened in Dublin on 9 February 1995. Since then, the show has visited over 450 venues worldwide and been seen by over 25 million people, making it one of the most successful dance productions in the world.

“Yes, that about sums it up,” smiles the show’s Executive Producer and Director Padraic Moyles via Zoom.

Moyles is joined on the call by the production’s principal dancer Amy-Mae Dolan.

“The show has brought so much joy to so many people around the world,” she shares. “And it still does, maybe even now more than ever.”

Originally scheduled for 2019/2020, the famed Irish spectacle – like everything else on planet Earth – went on hiatus during the COVID-19 pandemic lockdown.

“It was completely unexpected, of course,” notes Moyles, who has been with the company – first as a dancer and, more recently, in his current role – since 1997. “We have never seen anything like it and there was a lot of waiting on when and where and how we were going to get back out on the road. In my position as one of the core leaders of the show it was vital to remain upbeat and optimistic.”

As per the adage, the real job of a leader is to create other leaders.

“Yes, that’s it exactly. And Amy-Mae is an ideal candidate to carry on that legacy, as she will be leading the dance team when the tour resumes in January in the USA.”

Almost amazingly, despite her young age, Dolan feels no pressure. 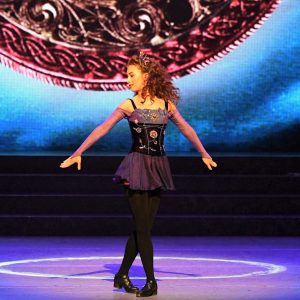 “I am really excited for the opportunity. It feels like I have been working my entire life for this moment.”

A quick glance at her resume confirms her ambition; born and bred in Aghyaran, Co. Tyrone, Northern Ireland, Dolan first danced for the Carson Kennedy Academy in Belfast as a child, later winning several major titles – including the 2010 World Irish Dance Championships (Oireachtas Rince na Cruinne). After attending the Riverdance Summer School in 2016 she became the show’s youngest lead dancer in history the following year at the age of 19. Among other notable highlights is her 2018 performance for Pope Francis at Croke Park in Dublin in front of more than 80,000 spectators. Her journey to the top of the Irish dance world was captured in the 2020 BBC documentary “Born to Riverdance.”

“It has been quite a wild ride,” laughs Dolan, who has developed a significant following on her social media outlets, including her YouTube channel, where she posts behind-the-scenes clips from the Riverdance tour alongside her own Pilates instructional videos.

“All my years of training and hard work have paid off in ways that I never could have imagined,” she continues. “It is a dream come true. And I have made so many great friends along the way. We are much more than friends at this point, however – we are a family.”

“We are very much a family, for sure. When we talk about the people of Riverdance, we aren’t just speaking about the present cast and crew – think of all the past members that have been involved with the production over the last 25 years; the dancers, the musicians, management, the directors, the stagehands…a huge amount of people have come and gone in that time. A few who met while working on the show got married and had children, and now some of those young ones are with us. It has become a generational experience.”

That is true of audiences as well.

“Folks who might have seen the show years ago are now bringing their kids and their grandkids to the performances,” continues Moyles. “For some it has become a part of their own family tradition.”

Dolan says that creating memories for others is beyond rewarding.

“I look out into the audience during the show and see people smiling together or laughing together or tapping their toes and it makes me feel all warm inside. Those are the times that you live for as a performer – knowing that, even if it is only for a few moments here and there, you have made a positive difference in someone’s life.” 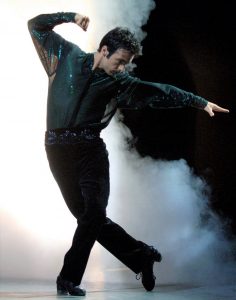 While Riverdance is renowned for its brilliant choreography, moving musical overtures, and elaborate stage sets and lighting, it is the human element that audiences connect with most.

“The show is, ultimately, one of storytelling,” notes Moyles. “It is very Irish in that regard. We are natural storytellers, given our history of myths and legends. Beyond the flash and glitz it is a story of people – their ideas, their emotions, their experiences…these are things that resonate on a deeper level.”

As such, he says that focus is key for performers.

“Oh, absolutely,” agrees Dolan. “There are a million things that go through your mind while you are up there. The real trick is just to let them pass and continue to concentrate on each moment. While the steps and routines are committed to memory, you really have to stay on your toes and remain mentally focused at all times.”

The chance to connect with audiences in-person often comes post-performance.

“I love meeting people after the shows,” continues Dolan. “The feedback is fantastic, especially when you meet a young dancer that has just been completely blown away by the performance. Seeing that you have perhaps inspired a little girl or boy to take up Irish dance, or perhaps encouraged someone to keep dancing or even motivate them to explore Irish culture a little more, is a big part of why we do what we do.”

Not surprisingly, many of those meet-and-greets are with Irish ex-pats.

“There are a few of them about,” laughs Moyles. “Actually, I am always pleasantly surprised to meet people that have absolutely no connection to Ireland at all – no roots, no heritage, no family relations. It is interesting, though; often they are the ones who connect with the show the most.”

Moyles sometimes takes a seat in the venue to gauge what audiences are experiencing.

“I love watching people’s reactions to what is taking place on stage. It is quite something to see them smile or nod their head or lean over and share a thought with the person next to them. On occasion, during intermission, I will even head to the men’s room just so that I can hear more of what people are thinking and feeling about the show.” 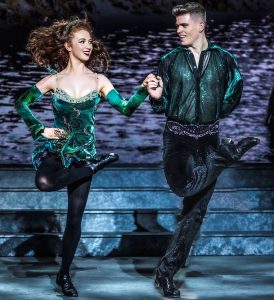 So far, reviews have been beyond positive, with critics calling the new production “stunning,” “spectacular,” “hypnotic,” “thrilling,” “breathtaking,” and “unforgettable.”

“The U.K. tour was brilliant,” says Moyles. “We began anew in late summer and went right through to December. It felt so good to be back out there after all the delays and issues brought on by the COVID-19 pandemic. And the audiences just went wild. I think they were just so happy to get out of the house and return to some semblance of normalcy. It is amazing to think that something that started a quarter of a century ago could continue to evolve and touch people around the world.”

With tour dates scheduled across North America, Europe, and Asia over the coming 12 months, the show shows no signs of slowing down anytime soon.

“Oh, I wouldn’t be surprised if it went for another 25 years at this point,” muses Moyles with a grin. “The demand is certainly there, and so long as we have the will and the creative energy and the talent, we will continue to perform for people everywhere we can. The possibilities to grow the show, and to further inspire audiences, are limitless – almost beyond words.”