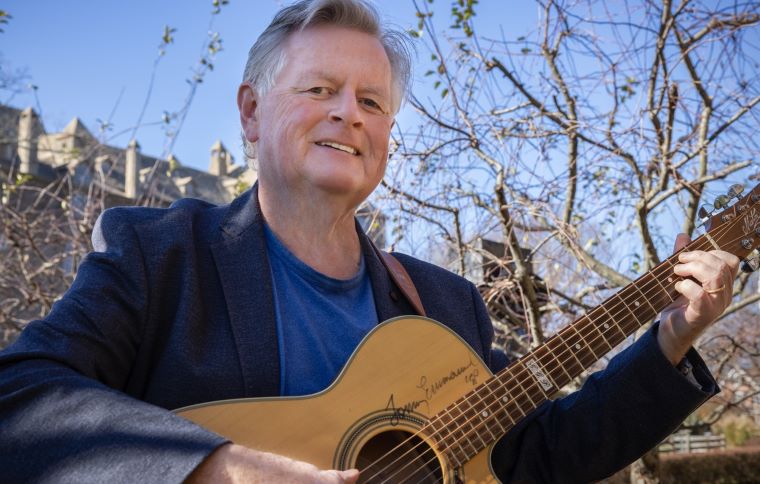 Irish musician Seamus Kelleher was only 14 years old when he first took up the guitar.

“My sister had a cheap nylon string guitar,” he tells Celtic Life International via email. “One day I picked it up and started playing a few notes. Within moments, I realized that there was something about the sound that I loved.”

The Galway-native spent several months honing his craft and, within a year, had performed his first professional gig.

“I was pathetically shy, but when I picked up the guitar that went away and for those few moments on stage the other side of Seamus took over.”

Kelleher’s early career was eventful; at the age of 17 he opened for Irish rock band Thin Lizzy, and at 20 he joined a group called Rock and Roll Circus.

“They were all older than me, so it was like going to school every day for music. We were a big deal in Ireland for a few years. The band did a tour of America in 1974 and broke up shortly afterwards. During that tour, I fell in love with New York and figured it was the right place to continue my music career.”

The Galway-native currently lives in Doylestown, Pennsylvania. He notes that he is still passionate about music.

“It is that connection with the audience that feeds my passion. I am more confident now – and hopefully a better musician – but I get just as excited as that fourteen-year-old who played my first chord at a school concert back in Galway in 1968.” 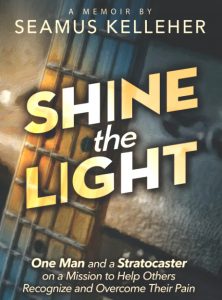 Kelleher has since toured and performed all over America, including from 1995 to 2011 with Celtic rock band Blackthorn.

As well, Kelleher has spoken out about mental health over the years, leading to the creation of his Shine the Light initiative.

“During my late teens, I suffered from severe depression. I had a very abusive school situation. In addition, Ireland was on the verge of civil war with the Troubles in Northern Ireland. I have managed my depression and anxiety throughout my life, but things got bad when I started drinking at age 30. That made the depression worse and put me in a dark place. My drinking was out of hand and on a few occasions almost cost me my life.”

He has been sober for seven years now.

Recently he released his memoir (also called Shine the Light), which he hopes will positively impact those with a shared experience.

“The book was a way of sharing my story with my children, but as things evolved, I realized that it might be a way to help folks who struggle with their mental health issues and addiction. It is a message of hope.

“It is not a self-help book in the traditional sense but there are a few chapters dedicated to explaining what to do if one struggles with mental health issues and addiction. I think it is particularly good for the parents of teens as it provides insight into the world of a teenager who is struggling. We see a lot of that these days, so I hope it provides a fresh perspective. But the book is also a love story of sorts where I talk about my courtship with my wife that lasted way too long. Despite some of the heavy content, there are also some very funny stories. I have been blessed with a life filled with adventure.”

Kelleher admits the project was not without difficulty, noting specifically the need to re-live dark and upsetting times in his past. Still, he says that both the book and the initiative were worth the trying times.

“There is something wonderful about that moment when you receive your book in the mail. I felt a sense of accomplishment and relief that I had finally put my story down on paper. When people tell me they were touched by the book, my heart fills with joy.”

The coming months, he shares, will be busy.

“In addition to 170 shows already on the books all over the country, I have several motivational speeches planned. I love speaking to young people and corporate audiences. I incorporate music into my Shine the Light presentation. It disarms the audience and allows me to go deep with them. God willing, 2022 will be a productive and fun year.”