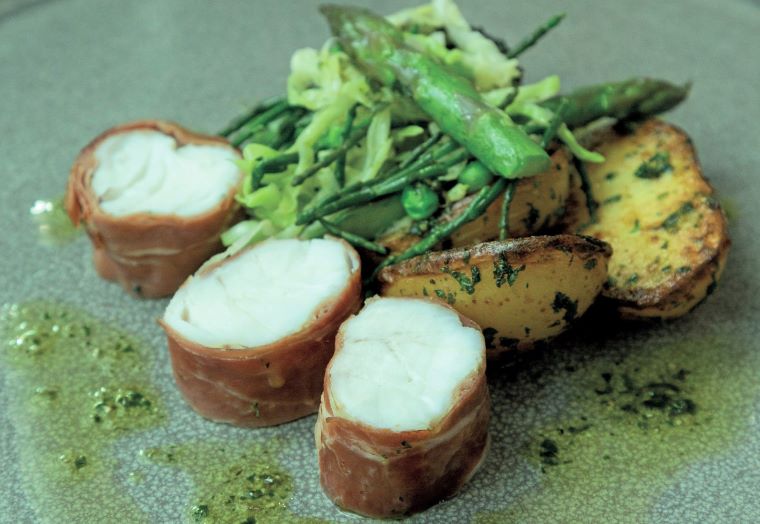 Monkfish – also known as goosefish or American angler – populate the western North Atlantic, from Newfoundland to North Carolina, and have also been spotted along the coast of Barbados and in the Gulf of Mexico. They are an ugly fish with a huge head that accounts for half of their weight. Nevertheless, the monkfish has an inner beauty – once skinned, trimmed and with the membrane removed, the tails yield a firm, meaty texture and taste that is similar to langoustine. It is more forgiving than thin-filleted fish in that it won’t break up when being cooked. It is a perfect seafood for people who don’t prepare fish very often, as it cooks as easily and finely as a tender steak. There are also no bones to worry about, as only the tail is used.

The first job is to get the potatoes going – baby new potatoes are traditionally cooked in boiling water, however cooking from cold you get a much more even cook. Add a proper pinch of salt. Once cooked, pour the potatoes into a colander and let them steam out – never cool in cold water, as steaming out gives the potatoes a chance to dry out and result in a much better and tastier potato. Next, blanche and refresh the green vegetables by bringing a large pot of salted water to a rolling boil – add the prepared vegetables and cook for a few minutes. Cooking time will depend on the type of vegetable being blanched and the size, but you are looking for them to have a slight bite. Remove with a slotted spoon and plunge immediately into ice water, which stops the cooking and retains both the nutrients and colour. The next job is to wrap the fish in the ham, this will protect the fish and help retain the moisture. Cut into portion size pieces. 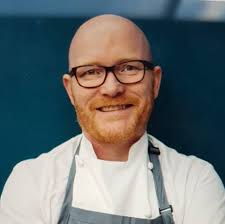 You will have to trim the fish and separate the two fillets from the centre bone. Pre-heat a properly sized, non-stick pan big enough. Medium heat is ideal. Once hot, add a tablespoon of oil to lightly cover the base of the pan. Add the Monkfish on the cut edge. Give each side of the fish a couple of minutes in the pan. Add a knob of unsalted butter and baste the fish in the foaming butter, before removing from the heat and allowing to sit in the pan for 2-3 minutes. The fish should now feel firm to the touch. Whilst the fish is cooking, start to sauté your potatoes in another pan – half the potatoes and place into the pan with a little oil on the cut edge. Allow them to cook and gain loads of colour, turn them over and cook on the skin side. Season with salt and cracked black pepper. Remove the pan from the heat and add a small knob of butter in which to baste the potatoes. Remove the potatoes from the pan and keep warm. Add the blanched green vegetables to the same pan adding a little more butter if necessary. Double check the seasoning and serve.