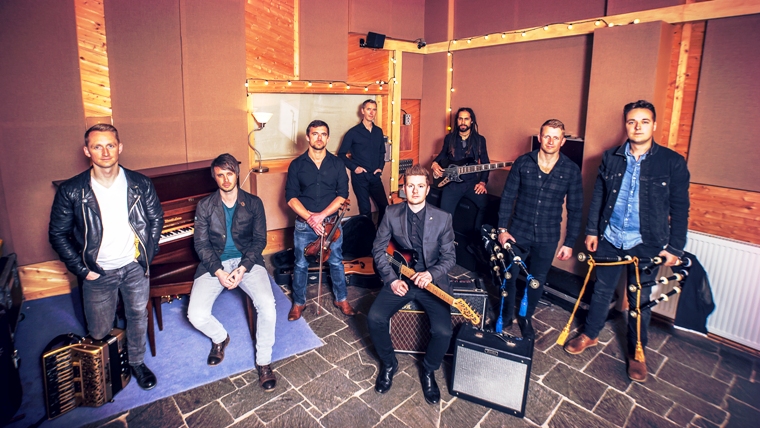 Skerryvore has been bringing their unique brand of Celtic fusion to audiences for more than a decade.

Recently, the eight-piece group released its sixth studio album, Evo, which leapt to number 15 on the iTunes U.K. album chart – making it the highest new entry on the list.

The band was founded in 2005 by brothers Daniel (accordion) and Martin (Highland pipes) Gillespie, who were born to an Irish father and a Scottish mother on the Isle of Tiree – the most westerly island of Scotland’s Inner Hebrides.

“My first accordion lesson was at the Tiree Feis when I was 8 years old,” recalls Daniel, referring to the annual festival that promotes the isle’s music and culture. “The Feisan movement has been a huge factor in the surge of young traditional musicians in Scotland over the past two decades. On Tiree, we were fortunate to have both Gordon Connell and Robert Beck, who gave hours of free time to teach accordion and bagpipes to the young people of the island. All they asked for in return was that you were committed to learn.”

Daniel says that Skerryvore’s early years were focused on traditional ceilidh music. But “even then, there was always a desire to approach and arrange these traditional tunes differently than other acts in that scene.”

Today, the band incorporates folk, rock, Americana, and more into its traditional repertoire.

“The biggest step in developing our own material and sound came with our self-titled album in 2010. That was, without doubt, the key moment in the band’s evolution both musically and in terms of a career.” 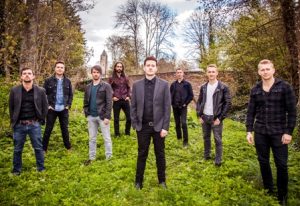 Another professional highlight came five years later, when the band played its 10th anniversary gig in the Scottish port town of Oban; over 6,000 people travelled from all over the world to see the performance.

Daniel admits that it isn’t easy to pigeonhole Skerryvore’s style and sound.

“There are so many influences within the group; from country to Celtic, folk to funk.”

“One element that has remained constant is our commitment to traditional music – our roots, where we started; be that with a full-on instrumental set, or just a simple hook within a song.”

“What we have found is that no single approach always works,” explains Daniel of the ensemble’s creative process. “When you have a group as big as ours there are different personalities and minds that work in different ways.”

Similarly, producing Evo took a number of twists and turns, with the album recorded in both Hartford, Connecticut and Scotland – where it was also mixed – before being mastered in New York City.

“There were also several personal events over the 18-month process that shaped some of the songs and tunes on the album and in a way made it far more powerful a recording.”

For Daniel, At the End of Line is a favourite track, as is a piece titled Soraidh Slan, meaning “farewell.”

“These are very different sounding songs, but both are full of emotion. Any song that can make a connection with listeners is good – that is the magic of music. From a band perspective, we always consider how the material will work in a concert setting, as our live show is so central to what we do.”

So far, public and critical response to the album has been excellent, and Skerryvore has since been making the rounds on the U.S. and U.K festival circuit, playing to packed audiences. The band’s tour will also include appearances in the Netherlands, Germany, Denmark, Canada, and Australia.

“It is an extremely exciting time for us, and for the genre,” says Daniel. “The quality of young players is simply incredible, and I can’t remember a period when tickets sales were so strong. It is amazing to see such a wide range of people of all ages and backgrounds coming out to shows and enjoying traditional music.”