Stirling and the Trossachs 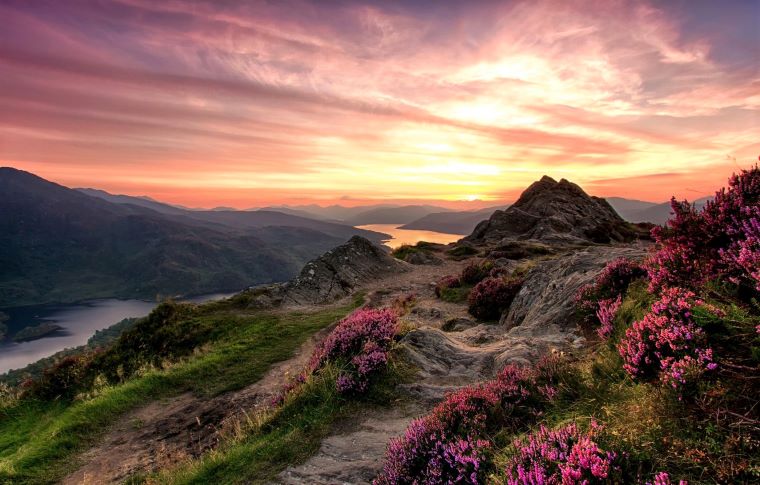 The Trossachs is an area of Scotland often referred to as the ‘Highlands in miniature’. Lying to the west of Stirling and to the east of Loch Lomond, its exceptional beauty – borne of rugged hills, densely wooded glens and deep, dark lochs – is embodied with all the character, mystery and legends that one expects of the Scottish Highlands. The name stems from the beautiful, small Glen of Trossachs at the centre of the area. Thanks to writers such as Sir Walter Scott – who developed a great affinity with this corner of Scotland – the popularity of the area grew during the 19th century. As word spread, the name of the glen became synonymous with the wider region. Today, the Trossachs forms part of Loch Lomond and The Trossachs National Park.

The city of Stirling lies 15 miles to the east of the Trossachs and is an excellent base to explore this unique and historically important part of the country. The source of the famous River Forth is Loch Ard in the Trossachs, and as the river winds its way to Scotland’s east coast it meanders through wide-open plains overlooked by Stirling Castle, which stands strategically atop a 250-foot high, extinct volcano. Although it is likely that earlier fortifications existed on the hilltop it was during the Middle Ages that the current castle evolved with Stirling and the surrounding area becoming one of several battlegrounds in the Scottish Wars of Independence. The Battle of Stirling Bridge in 1297 saw Andrew Moray and William Wallace rout the vastly superior English Army in clear sight of the battlements of Stirling Castle, while King Robert Bruce did likewise at the Battle of Bannockburn in 1314. Mary Queen of Scots was crowned at Stirling Castle and, although it is one of the most impressive castles in Scotland bestowed with a rich history, there are few edifices that rouse the Scottish spirit more than the iconic monument to William Wallace standing on nearby Abbey Craig. Constructed in 1861 to commemorate this national hero the 220-foot tower, with its stone crown, rises above the woodland and dominates the skyline. If you climb the 246 steps to the top you are rewarded with views over a landscape that shaped Scotland’s history. Face northwest and you are looking at the Trossachs – an area with its own tales to tell.

The towns of Aberfoyle and Callander serve as gateways to the Trossachs and beyond and both are stops on the Rob Roy Way – an approximate seven-day walking route across the Southern Highlands named after the legendary Scottish folk hero Rob Roy MacGregor who was born by the shores of Loch Katrine. Immortalized by Sir Walter Scott in his fictional novel Rob Roy – and often portrayed as Scotland’s Robin Hood – he was, in reality, a rather contemptible villain. The MacGregor clan long had a reputation as cattle rustlers and racketeers and indeed the name MacGregor had been banned by the Crown. Although Rob Roy’s early years involved buying and selling Highland cattle for the Duke of Montrose, he likely was connected to the clan’s wider illegal activities. In 1712 there was a slump in the cattle trade, and he lost £1,000 of the Duke of Montrose’s money – a huge sum in those days! Although Rob Roy claimed his head drover had stolen the money and that he was taking steps to repay it, he soon found himself bankrupt and his family evicted from their home. He turned to cattle rustling and thieving – initially aimed at exacting revenge on the Duke of Montrose but soon including other landowners who wouldn’t pay his protection demands. A further fall from grace occurred when he became connected with the Jacobite uprising supporting the Stewarts in their doomed attempts to overthrow William of Orange and the English Crown. 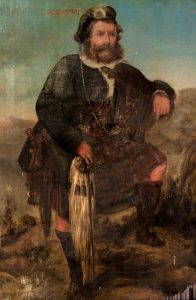 Although occasionally he was credited with helping others in need – often using the proceeds of his illegal activities against the wealthy – he inevitably became a wanted man.

Despite being captured more than once he always managed to escape. Partly through public acclaim on the back of Daniel Defoe’s romanticized Highland Rogue – which was published during his lifetime – Rob Roy was granted a Royal Pardon. He lived out his life in Balquhidder Glen to the north of Callander and was buried in Balquhidder churchyard on New Year’s Day 1735. His grave lies beside the ruins of the old kirk, defiantly displaying the motto ‘MACGREGOR DESPITE THEM

Balquhidder was a special place for the ancient Celts and alongside the ruins of the old kirk stands a 19th century church, behind which rises a small hill. In ancient times it was on this hill that fires were set and the spirits invoked at Beltane and Samhain. Making sense of ancient beliefs and absorbing them within new faiths is a perennial challenge for the proponents of any new religion. It would have been no different for Saint Angus who introduced Christianity to Balquhidder, and it was certainly a dilemma that haunted the Reverend Robert Kirk giving rise to one of the Trossachs’ strangest tales.

Born in Aberfoyle, Kirk was the seventh son of James Kirk, the minister at Aberfoyle. He studied theology at St. Andrews University and subsequently graduated with a master’s degree from the University of Edinburgh. In 1664 he was called to be minister at Balquhidder. While there he undertook the first complete translation of the Scottish metrical Psalms into Scottish Gaelic, and also travelled to London to oversee one of the first translations of the Bible into Scottish Gaelic. He was an educated man, and while he would have been familiar with the ancient practices associated with Beltane and Samhain these were not the only supernatural things he encountered. When Kirk was alive Scotland was still hunting witches. Every town, village and glen in the country had its own superstitions. Fairies, changelings and all manner of spirit-world phenomena were commonplace beliefs that seemingly provided explanations for things that were otherwise inexplicable. Also, according to folklore, as the seventh son of the family Kirk was bestowed with the gift of second sight. It is therefore perhaps not surprising that, after he became minister of Kirkton Church, Aberfoyle in 1685, he regularly took an evening stroll to nearby Doon Hill and communed with the fairies that were believed to live there. In his mind this was no fantasy. He studied them in great detail – trying to make sense of their society and how they lived. Unconsciously, what he was likely trying to do was make sense of the beliefs that surrounded him and how they related to his religious education. He wrote his findings in the manuscript The Secret Commonwealth of Elves, Fauns and Fairies. Published after his death, this scholarly work provides some of the best insight into the folklore of his time. However, its importance has been diminished by the ensuing myths surrounding his death and burial.

Kirk’s final walk to Doon Hill was on May 14, 1692. He never returned and his body was found on the hill. Most probably he had suffered a heart attack. Because of his fascination with the fairies it wasn’t long before the rumours circulated that his revelations about their hidden kingdom had upset the fairies and they had spirited him away leaving a changeling in his place. Kirk was buried in the old Kirkton churchyard – or was he? Some accounts hold that the grave is empty, and that Kirk is forever a captive of the Fairy Queen. Today his grave and Doon Hill attract large numbers of curious visitors.

Whatever your view of the story of Kirk it embodies the spirit of the Trossachs.  This is an area steeped in a history rich with colourful characters, romanticized stories and nation-changing events all set against the stunningly beautiful landscape that is the Trossachs. ~ Story by Tom Langlands