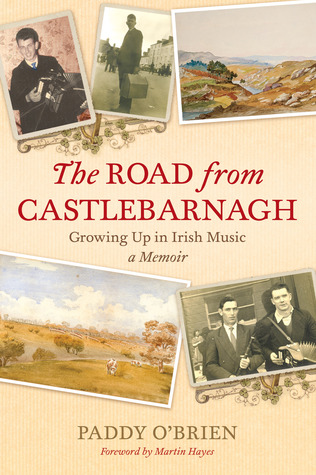 Our staff teams up to review several of the latest literary offerings from the Celtic world!

The Road from Castlebarnagh
By Paddy O’Brien
Orpen Press / 316 pp / $24.95
Irish traditional musician, composer and collector Paddy O’Brien can now add storyteller to his resume with this endearing recollection of rural life in Daingean, County Offaly. Subtitled Growing Up in Irish Music, the work is both a melodic memoir that spans a career of more than fifty years and a bird’s-eye perspective on the region’s timeless countryside social life. With plenty of good yarns to go around, and relayed in a smooth and soothing lilt (much like the many jigs, reels and airs played by O’Brien himself) readers might feel like they are sitting at the scribe’s kitchen table, swapping stories over freshly-baked biscuits and a hot cup of tea. Warm, witty, wise and wonderful, The Road from Castlebarnagh is a musical journey worth taking.

The fourth novel from Scottish author Michael Cannon explores the powerful, life-affirming qualities of friendship in its many forms. The story’s opening chapters are propelled by the passionate friendships between three disparate young women growing up in working-class Glasgow: Gina is a smart girl from a disadvantaged home who becomes accidentally pregnant; Lolly is her big-breasted, big-hearted friend and Ruth, is an insecure, shadowy girl who is dominated by her socially ambitious mother. After tragedy strikes, Gina ends up alone and desperate in London where she is rescued by the platonic friendship of a reserved widower, Christopher. The story blossoms in these later chapters. Christopher’s character is sensitively drawn and his loneliness and growing feelings for Gina are beautifully evoked as is her burgeoning confidence. But the reader fears for them both when a careless remark from Christopher threatens their contentment. The novel’s denouement is compelling.

Subtitled The Portable Highland Clearances Companion, this all-in-one work is part reference guide, part handbook, part travel guide and part resource digest. By way of chronology and encyclopedic listings, Sawyers details the global Scottish Diaspora following the great Highland Clearances of 1790-1855. The result is a fascinating survey that connects the Celtic dots across the globe, highlighting a people determined to preserve and promote their history and heritage. Particularly stirring are the passages on the individuals, both renowned and unknown, past and present, who have called the world’s attention to what now must be reconsidered as cultural genocide. Though academic in essence, Bearing the People Away is an easy and even read, and an excellent and essential work for anyone interested in Scottish emigration stories. ~ SPC

An acclaimed arts academic in Ireland, O’Conner’s in-depth study of one of that country’s most controversial voices and visual artists Seán Keating (1889-1977) is an illuminating look at both the man and the era in which he lived. Drawing lines between Keating’s work and the political and social unrest on the Emerald Isle – particularly during its rise to independence – the author makes a strong case for the artist both reflecting, and ultimately betraying, his times. The result will leave readers wondering if art merely mirrors life or the other way around. Beautifully illustrated with over 200 paintings, sketches and photographs, the question seems almost moot; Keating’s brilliant use of colour, lighting, depth and texture were masterful and stood well beyond any political and social milieu.