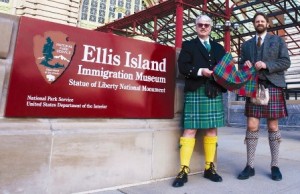 Tartan Day on Ellis Island will be the scene of one of the country’s premier Celtic events this weekend with an array of amazing activities. Event founder and organizer Bob Currie gives us the details.

What motivated you to put this event together?
I guess you could say I’m a champion for Ellis Island. I’ve been involved with Ellis Island since 1998. That year, NJ Governor Christine Todd Whitman convened The New Jersey Governor’s Advisory Committee on the Preservation and Use of Ellis Island to determine the future of New Jersey’s stake on Ellis Island, which includes 30 un-restored buildings on 22.5 acres. Whitman named me as one of the 10-member advisory committee. Up until then, it was not officially determined if Ellis was a part of New York City or indeed New Jersey. At the time, I was the Chairman of the Ethnic Advisory Council for the State of NJ and once the Supreme Court ruled on the status of Ellis Island our work began. After over two years of research and public hearings, we delivered our report to Whitman. In 2001, the Save Ellis Island foundation was formed and I’m proud to be a Director of the Foundation. Tartan Day on Ellis Island began in 2002. That year, the Clan Currie Society and the National Museums of Scotland joined forces to host the traveling exhibit, “Home and Away: Highland Departures and Returns.” Back then, there really wasn’t much to Tartan Week in New York. It’s amazing to see how it’s grown over the years. A quick visit to our website recaps all our previous programs and partnerships with photos and videos, including our award-winning documentary film, “The Crafter’s Song” which was shot on Ellis Island in 2003.

Who will be attending the event?
Everybody! We are proud that Tartan Day on Ellis Island is one of the largest-attended Tartan Day events in the world. In 2012 – our last program actually on Ellis before Hurricane Sandy struck – we hosted over 70 thousand visitors. Ellis Island is a must-see destination for Big Apple tourists from around the world. It’s also nice to see all of our NYC Tartan Week friends there as well.

What can they expect to experience?
Following in our tradition of hosting great programs, this year we will be presenting “Scots in the American West.” The exhibition has been produced by the Buffalo Bill Center for the West with support from Clan Currie, the National Trust for Scotland – USA Foundation and the Smithsonian Institute. The exhibition looks at the role Scots played in the opening of the American West and will introduce visitors to such famous characters as John Muir, Buffalo Bill Cody, Alexander Mackenzie and Alan Pinkerton, among others. In addition to the exhibition, visitors will enjoy performances by NY Celtic Dancers, the Rampant Lion Pipe Band, the NYC Harp Orchestra and one of the area’s hot new Celtic bands, NY Brogue. In the spirit of the exhibition, we’ve put together a great lineup of traditional cowboy songs which had their origins in traditional Scottish music. Members of the Clan Currie Society will also be on hand to share news about all the great NY Tartan Week events, look up clan tartans and share news about Scotland’s Year of Homecoming. Best yet, it’s all offered free of charge!

Why is it an important event for the Scottish community there?
Well I think it is important for the Scottish community as it educates and informs on the impact of the Scottish Diaspora in America but our program is really produced for the general public regardless of ethnic origin. Since Ellis Island is an international tourist destination, we’ve played host to people from literally around the world. It’s heartwarming to experience their interest and affection for the Scottish people. We’re proud to be regarded by many as one of the “anchor” events of NY Tartan Week but are even more delighted over how NY Tartan Week has grown over the years into a full two-week celebration. From our Ellis Island observance to fashion shows, gala dinners, whisky tastings, art shows, the parade with their menagerie of Scotties and Westies to the debut this year of a fantastic military tattoo staged by one of Scotland’s premiere producers of piping extravaganzas, there truly is something for everyone in 2014!

How do you see the event growing in the years ahead?
What’s that line from “Jaws”? “I think we’re gonna need a bigger boat.” We’ll need to add another week to hold much more. Actually, for NYC I think we just need to sustain and occasionally reinvent the existing events from time to time and perhaps drop some of the less popular programs in favor of new, crowd-pleasing events. That’s why Clan Currie is supporting the NY Tartan Week Tattoo. It promises to be an important and lasting showcase for Scottish music and dance. We’re delighted to be sponsoring the performance of the 2013 US National Scottish Harp champion, Haley Hewitt. What I’m most keen on seeing is this same level of enthusiasm and professionalism get carried forth to other cities across the country. Sure we know Tartan Day is being “observed” in places like Washington, DC, St. Louis, MO and Tulsa, OK but it would be great to see more cities across the country jump on board. Clan Currie has a growing inventory of first-class exhibitions and we’re ready to share them.

What are your thoughts on NYC Tartan week?
First and foremost, I want to recognize the hard work and tireless efforts of Jean Watson from Nova Scotia. There wouldn’t be a Tartan Day or a NY Tartan Week without Jean and her efforts to get Tartan Day recognized in Canada. Anyone who claims any Scottish ancestry owes a debt of gratitude to Jean. She should be made the Grand Marshall of the NY Tartan Day Parade!

What can be done to grow Tartan Week?
In addition to increased geographic expansion, I think just more of the same. There are so many terrific people working tirelessly to spotlight our Scottish heritage how can it go wrong? There’s an old African proverb that says, “If you want to go fast – go alone. If you want to go far – go together.” I think that sentiment aptly describes the alliance that has been created by many of the Tartan Week’s anchor events. The spirit of cooperation and consideration has really helped us set our sights on growing Tartan Week in New York.