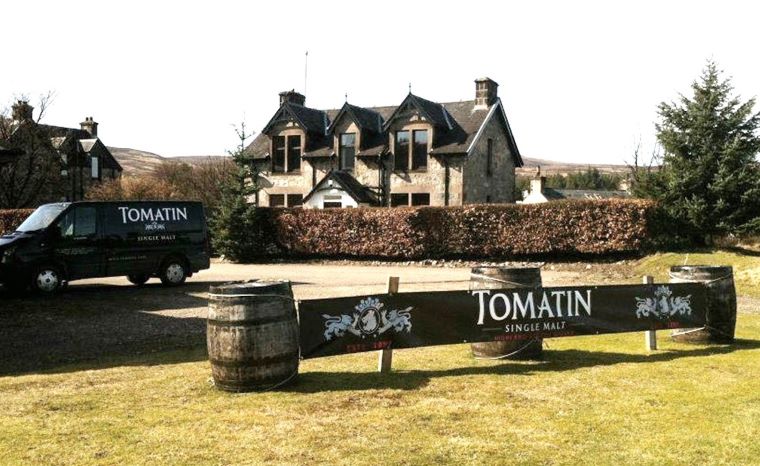 I suspect that – if asked – even relative novices in the world of single malt Scotch, let alone the afficionados, could likely guess the names of the largest distilleries in Scotland today. With a production capacity of 21 million liters of spirit each per year, Glenfiddich and Glenlivet are by far the industry’s largest producers. They are enormous, roughly 10 times the industry average. The next closest, at a still impressive 15 million liters is Macallan. The list drops off sharply from there. But ask the same question about the industry in the 1970s, and I suspect even the most knowledgeable afficionados would struggle to identify Tomatin as the era’s largest distillery.

In 1974, the Tomatin distillery installed a dozen new stills, which would have been impressive in and of itself, but is even more so considering that they were adding them to the 11 they already had. This gave the distillery an annual production capacity of more than 10 million liters a year, the largest of any single malt distillery in Scotland at the time. The distillery, as with the rest of the industry, was chasing the post war distilling boom in demand for Scotch whisky – in particular Blended Scotch. All booms eventually turn to bust though, and by 1986 the distillery was in liquidation…no pun intended.

Tomatin was founded in the town of the same name in 1897, high up in the Highlands between Inverness and Aviemore. The town was a stopover point on a centuries-old cattle droving road, and it is likely that some form of illicit distillation took place there as far back as the 16th century. By the 1700s, illicit distilling in the area was rife, as it was in much of the rest of Scotland. The choice of location was partly personal as the founder, James MacDougall, was a local boy. But it was likely the announcement of the route for the Highland Rail line in 1892, which would pass right by the town, which made the decision to open a distillery there all the more attractive.

As with many of the distilleries built during the Victorian whisky boom of the late 1900s, Tomatin’s fortunes turned with the start of the new century. 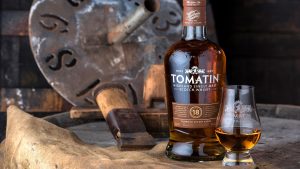 Throughout the 1880s and 1890s, new distilleries opened, and existing ones expanded production to meet the new global demand for Scotch whisky. This all came to an abrupt end in 1898 with the Pattison Whisky Crash. As with close to a third of the industry, Tomatin would fall victim to the crash in the decade that followed and was forced to close in 1906. However, it was spared the fate of many of the others and reopened under new management in 1909. It would continue to grow steadily over the decades that followed, until the decision was made to abruptly double its size in 1974. As with its opening, the timing was poor, with another industry correction less than a decade away!

At its peak, the distillery covered an enormous site, with a couple of dozen warehouses, sizeable grain storage, homes for staff, its own sizeable cooperage, and many other facilities. There was even an eel farm on site, which took advantage of the waste heat from the stills. Much of this legacy can still be seen today. And while Tomatin is not one of the most beautiful and manicured distilleries, it is one of the most interesting and authentic. In 1986, the distillery was saved once more from oblivion by new management, when it was acquired by Takara Shuzo and Okura & Co. It in turn became one of the first Scottish distilleries (but not the last) to be acquired by a Japanese firm.

In the 1990s, the new owners also acquired the well-known Blended Scotch Whisky brand Antiquary, giving the distillery new purpose, as well as ready demand for production. In 2000, 11 of the stills were removed, and a new direction was taken, with a focal shift toward single malts. Since then, production has rarely surpassed 2 million liters a year, with most of that increasingly destined to be bottled as single malt. The distillery’s range has evolved over the last 20 years, and now includes both peated and unpeated single malts, with the peated whiskies bottled under the brand name Cu Bocan or “Ghost Dog.”

Tomatin’s whiskies offer very good value compared to many better-known single malt brands. Most of the spirit today is matured in first fill casks, primarily Bourbon and Sherry, but also a variety of ex-wine casks. The brand’s reputation has grown over the years, and with that its distribution, with the whiskies widely available in most markets.

The distillery also offers a range of tours, 7 days a week, and is well worth a visit. A classic example of ‘its what’s on the inside that counts’, Tomatin offers an excellent counterpoint to the more famous, polished, and picturesque distilleries in the nearby Speyside region. The distillery is conveniently located just off the A9, the main highway, and is a short drive from both Inverness and Aviemore, and just 20 minutes from other iconic attractions such as Loch Ness, Culloden, Fort George, and Cawdor Castle. ~ Story by Andrew Ferguson