The Legend of Tristan & Isolde 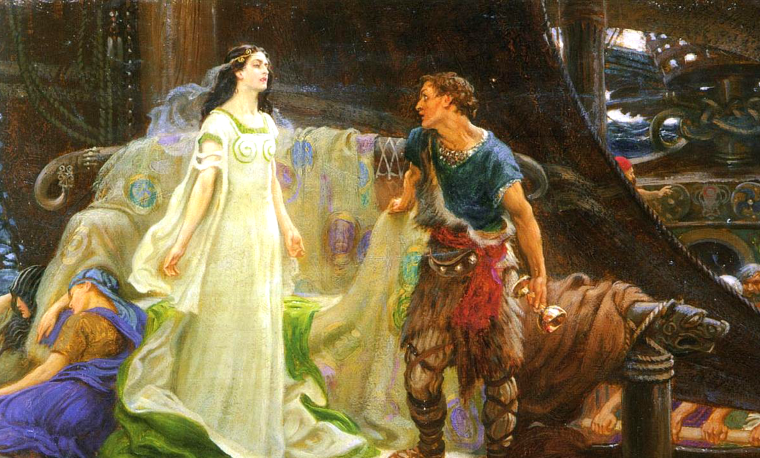 The legend of Tristan and Isolde is a tragic love story originating from Ireland and Cornwall. It’s one of the world’s classic stories and has been made into opera by Wagner, a film by Ridley and Tony Scott, and is the subject of numerous plays, poems and novels.
Tristan was born into an important family, the son of Rivalen and Blancheflor. Rivalen was a knight who was killed in battle before Tristan was born. Blancheflor was so heartbroken at the news of his death, that she spent three days in labour before giving birth to Tristan.

The baby Tristan was raised by the followers of Rivalen. He grew into a skillful and charming nobleman, with flair in the arts and music. He was made a member of the Court of King Mark of Cornwall, who then realised that Tristan was his nephew. King Mark was overjoyed to find his brother’s son and immediately made Tristan a knight. Tristan was grateful to his uncle and loved him like a father.
Tristan took part in a fierce battle with one of King Mark’s sworn enemies, an Irish Duke named Morholt. Tristan received a terrible wound in the battle that wouldn’t heal. He suffered with his pain until he heard of Queen Iseult in Ireland. Queen Iseult could heal any wound so Tristan decided to travel to see her.

As the years past, Tristan became concerned that his uncle was unmarried, and therefore had no son to inherit his kingdom. Tristan remembered Isolde and returned to Ireland to ask her to marry his uncle, King Mark of Cornwall. Isolde’s mother, Queen Iseult told her daughter to marry Mark, as their son would be King of Cornwall and Ireland. 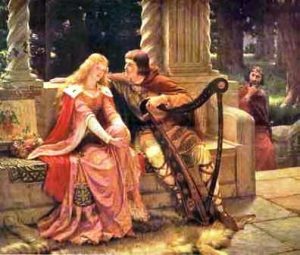 To ensure the wedding would go ahead, Queen Iseult prepared a love potion. She was worried Isolde would not want to marry Mark, when she saw how old he was. Queen Iseult gave the love potion to Brangwain, Isolde’s maid, with strict instructions to give it to Isolde and King Mark. The potion was hidden in a wine bottle and sent away with Brangwain, Isolde and Tristan.

However, on the journey from Ireland Tristan and Isolde drank the love potion, believing it to be wine. They instantly fell madly in love. When Brangwain realized what they had done, she told Tristan and Isolde that what they had drank had not been wine but a love potion.
Out of loyalty, Tristan insisted Isolde go ahead with the marriage to his uncle, despite his feelings towards her.

When King Mark met Isolde he immediately fell in love with her beauty and the two were married. However, still under the potion’s spell, Isolde and Tristan could not resist each other and continued to see each other behind King Mark’s back. Several of Mark’s followers accused the two of adultery but they always pleaded their innocence.

Eventually Mark lost patience. He was angered by the betrayal of Tristan and banished him from his kingdom forever. However he could not be angry with his love Isolde and she remained his wife.

His love for his Irish Isolde was too much for Tristan, and he returned to Cornwall to see her again. She was cross when she learned he had married but soon forgave him. The love potion the two had taken all that time ago still had a hold of them and they fell into each other’s arms. However, Tristan knew he couldn’t stay in his uncle’s Kingdom. He would have to return to his wife Isolde in Brittany.
On his journey home, Tristan took part in a battle and received a lethal wound. He sent for his love, Irish Isolde, knowing only she could heal him and save his life. Tristan was unsure if she would see him again after he had left her for a second time. He told his messenger to hoist a white sail if Isolde was coming or a black sail if she wasn’t. When the message got to Isolde she immediately agreed to travel to see Tristan. Isolde also knew that only her love could heal his wound and save his life. 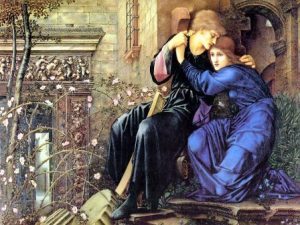