The Enduring Legacy and Presence of Colm Cille 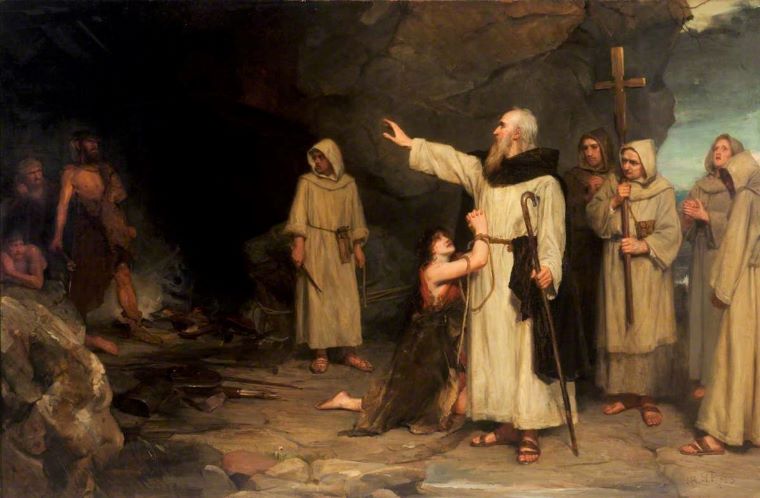 2021 marks the 1,500th anniversary of the birth of arguably the most important and influential man in the intertwined heritage of Scotland and Ireland. He stands on the threshold of recorded history, one of the earliest individuals about whose life we know many concrete details. His name was on the tongues of Gaels every day for centuries and even accompanied exiles who immigrated to North America.

He served as a bridge between many divides in his time: between Ireland and Scotland, between paganism and Christianity, between the Gaelic and Pictish worlds, between orality and literacy. His life story is itself bound up with the destiny of the Gaels in the British Isles.

He is best known in English by the Latin form of his name, Columba, although that was not the name he was given at birth. His father, Fedelmidh, was a member of the most powerful family in Donegal, the Northern Uí Néill. When his mother was pregnant, she had a dream that an angel gave her a beautiful cloak covered in colourful, fragrant flowers. The cloak flew into the sky and then descended, covering all of Ireland and Scotland. She said that she was sad to lose such a beautiful cloak, but the angel explained the meaning of her dream: she was pregnant with a son who would help to spread Christianity across the land.

This anecdote has lovely imagery, but it may have even greater significance: the Latin word for the Gaels, Scotti, was probably a borrowing of the Gaelic word scot, meaning “flower, cream of the crop” – a word that the native Gaelic élite would have used for themselves when encountering Roman warriors, traders, and ambassadors. Modern scholars, as well as medieval Gaels, understood the success of the church to be pivotal to the flourishing of Gaelic culture, especially under the direction of this scion of the Uí Néill, whose parents named him Crimhthann, meaning “fox.”

It was the Gaelic custom for the children of aristocrats to spend a time in fosterage, and Crimhthann’s foster-father was a Christian who educated him in the teachings of the church. Crimhthann took to the faith with zeal and devotion, gaining such celebrity for his religious work that he was given a new name – Colm Cille, meaning “church dove.”

He didn’t always live up to Christian ideals of peace and docility, however. 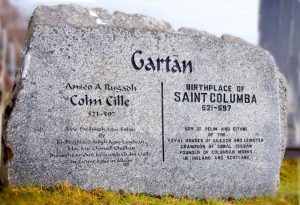 Once, he was at the center of what is sometimes characterized as the first copyright dispute in Gaelic history. One of his mentors, Fintan, returned from Rome with a rare treasure – a copy of the Psalms. Colm Cille borrowed it and Fintan eventually got suspicious of why it was taking him so long to return it. He found out that Colm Cille had written out a copy of this precious manuscript without his permission. Fintan was furious and brought the case to King Diarmaid mac Cearbhaill of Tara. The King ruled in Fintan’s favour, deciding that Colm Cille had to return the Psalms to him and also give him the copy that he had made.

The oldest surviving book in Ireland is said to have been created by the hand of Colm Cille. We don’t know if this is true, but it was treated as a powerful holy relic in the medieval era and was carried into battle as a talisman by the O’Donnells of Donegal. It is for this reason that it is called An Cathach – “The Battler” – even though it is actually a copy of the Book of Psalms.

Not long after that incident, Colm Cille left Ireland with a dozen of his Uí Néill kinsmen to set up a new monastery on an island known in English as Iona. Nowadays Iona is within the territory of Scotland, but at the time it was in the orbit of a kingdom called Dál Riata that spanned from the north of Ireland and into the part of Scotland now referred to as Argyll. Colm Cille became the archetypal exile in Gaelic tradition, even if his short jaunt across the Irish Sea pales in comparison with the trans-Atlantic journey of modern emigrants.

The sea connected rather than divided people in those days, and Iona was ideally situated to give Colm Cille and his disciples access to a multitude of the kings and ethnic groups that dominated the British Isles in that era. Iona became a beacon of learning and art, instrumental to the advancement of Christianity in Pictland and Northumbria. Colm Cille was Scotland’s first national saint, and even though Saint Andrew came to replace him as the dominant religious figure in the Lowlands, Colm Cille (or “Calum Cille,” as he is known in Scottish Gaelic) remained dominant in Gaelic Scotland to the present. One of his relics, the Brecbennach, was even carried by Robert the Bruce into the Battle of Bannockburn against the English in 1314.

There is an island in the Firth of Forth called Inchcolm where there was a monastery devoted to Saint Columba. Fortunately, a manuscript of Latin hymns written to him by the monks of the island during the Middle Ages contains stanzas such as:

“O Columba, hope of Scots,
by your merits’ mediation
make us companions
of the blessed angels. Alleluia.”

Most of what we know about Colm Cille’s life comes from a book that Adomnán, the ninth abbot of Iona, wrote about him in the late seventh century, about a century after Colm Cille’s death. It is incredible not only that the most important manuscript containing a copy of this book appears to have been written on Iona during the lifetime of Adomnán, but that it survives in Germany, where it was brought by one of the scholar-monks of Iona. 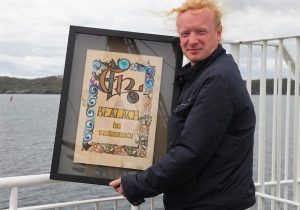 A host of saints feature in Gaelic folklore, but Irish folklore collectors in the twentieth century gathered more traditions about Colm Cille than any other saint. He was such a central feature in Gaelic consciousness that a day of the week is associated with him: Thursday. Many traditions and sayings are attributed to Saint Columba, including those brought to Nova Scotia and survive to the present.

I heard a very interesting prophecy attributed to Colm Cille from my friend Lodaidh MacFhionghain (Lewis MacKinnon), the CEO of Gaelic Affairs in Nova Scotia, which he heard from his father, and he in turn heard from Iain Aonghas MacÌosag, another native of Inverness County, Cape Breton: Mun tig crìoch air an t-saoghal, bidh na samhraidhean ’nan geamhraidhean is bidh na geamhraidhean ’nan samhraidhean (Before the world comes to an end, the summers will be winters and the winters will be summers). It is not unusual for apocalyptic lore to describe a world turned upside down, but the echo of current climate change issues is eerie.

Colm Cille’s imprint on the Gaelic culture of Scotland, Ireland, and the diaspora is broad, deep, and undeniable, and it is fitting that the joint initiative Colmcille 1500 is commemorating his legacy in 2021 in all these places. There is a raft of artists, musicians, writers, and scholars involved in responding to this cultural and historical heritage in creative ways, and I am honoured to be amongst them.

I have been collaborating with an amazing visual artist, Thomas Keyes, on a re-imagining of this artistic and literary material in our own times. Thomas was born in Ireland and started out working with graffiti in Belfast, but he now lives in the Scottish Highlands and is one of the only people who still produce illustrated manuscripts from raw elements – animal hides, plants, lichens, feather quills, and so on – like monks did in the Middle Ages. I have taken a number of the traditional tales about Colm Cille’s life and adapted them into modern Scottish Gaelic and English. Thomas, in turn, has produced an amazing carpet page depicting scenes from these stories, ornamented with the detailed, stylized, mesmerizing Celtic geometric designs whose lineage goes back to the Iron Age – but with some contemporary twists.

Our collaboration will continue to work on other major legends and heroic figures from Gaelic tradition, but it is certainly fitting for us to begin with the foundations laid by Colm Cille. ~ Story by Michael Newton