The Fine Fields of Osgathorpe 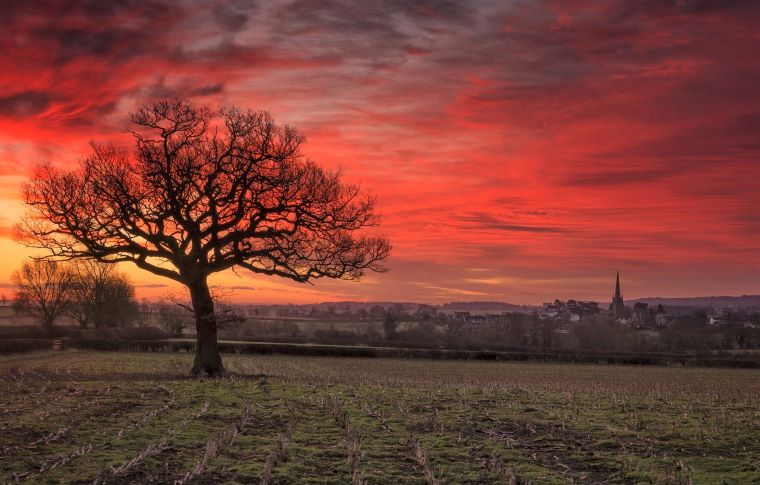 Once we were up and about on this fine Leicestershire Saturday morning, we went looking for something old and ruined and found the perfect combination in the Grace Dieu Priory near Thringstone. A priory, in case you are wondering as I was, is a monastery for nuns or monks and this one served as such until it went out of business, so to speak, and was taken over by a local scoundrel as his own personal estate. Spooky Isles considers it the most haunted location in Leicestershire. There are considerable reports of spirits wandering around here, including one “white lady” who walked out to the road once and appeared so real that a bus driver stopped to pick her up.

The remains of the priory date back to the thirteenth century and I saw nothing spooky about it, although I do think we all put a little bit of our own spirit into our homes, our possessions, even including our cars. So, even though I didn’t personally meet any ghosts or other spirits, I do think it is possible that those who have heard voices and seen apparitions here are tapping into something real. However, things must have gotten a bit out of control in recent years because the trust that owns the property states that enthusiasts “are no longer able to hold Paranormal events or Ghost walks, and Paranormal events organised by 3rd parties are Forbidden.” Either the trust doesn’t believe in ghostly spirits or they are hoping to protect their privacy from prodding ghost hunters and poltergeist chasers with their video cameras and “ghost boxes.”

We walked through the forest behind the priory and poked around a very cool-looking abandoned railway arch bridge, bringing me to conclusion that I like most all things that are ruined, abandoned, overgrown, and otherwise half-forgotten. And England is a very good place for finding such attractions as long as the ever-greedy National Trust hasn’t gotten their white-gloved paws on them. The only problem is you have to know where to look.

However, the true quest for the weekend involved me looking for more Choyce connections. Sibson, home of my ancestor James Choyce, was a ways to the south of here but I had decided to first seek out connections with Arthur Newberry Choyce, a World War I poet from these parts who had become famous enough to go on a tour of England and North America to read his poetry. He is mostly forgotten now but, as a poet myself, I felt a strong connection. 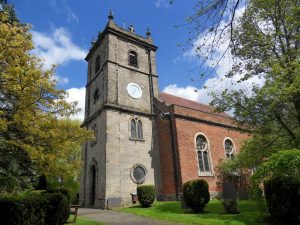 Arthur lived from 1893 to 1937 and had fought in the Great War with the Leicestershire “Tigers” which designated him as their official poet. It is curious to think that, in such a bloody mess of a conflict, the English remained civilized enough to appoint poets for their regiments. I don’t think modern day battalions of soldiers select honorary poets for wars in Afghanistan, Iraq, Syria or anywhere for that matter. Bigger bombs and high-tech weapons, I suppose, have bullied away the writers of sonnets and sestinas.

In 1917, Arthur published a book of poetry called Crimson Stains which portrayed trench warfare and the horror of the battlefield. In a short poem about the fallen men called “To the Leicestershires,” he wrote,

If in the next life or the next there be
A starting of our quarrels all again,
May Fate give task of leadership to me
And let me find the souls of these dead men.

His poems were sentimental at times but not overly patriotic and he was well liked enough to tour extensively reading his work to surprisingly large audiences. After declining in health, he died at age forty-three as the result of wounds he had received in the war and, unlike war poets Wilfred Owen and Rupert Brooke, he was soon forgotten by the literary world.

Arthur had written longingly about Charnwood Forest and, as we drove through there, I could see why. If you’d romped around those giant trees and played in the streams of Charnwood, you could understand why your mind and your pen would want to take you back there while trying to erase the nightmares you saw on the battlefields of France.

After the war, the poet was a headmaster of Snibston Primary School, so we went looking for it in Coalville. We didn’t like Coalville (pronounced Coville for some reason).

Linda kept asking me why we were there, and I said I didn’t know. I thought we might find a statue or a plaque for ANC or maybe locate someone who could tell us where his grave was, but Coalville wasn’t giving up any secrets about its one-time war poet in residence. The Bitter and Twisted Micropub looked somewhat interesting, but it was too early in the day for a pint and I saw a sign for a paintball park that could have entertained us, but we never warmed up to the town.

A bit of digging after the fact revealed that Coalville has a bit of a miasma hanging over it. One particularly unkind anonymous writer on ilivehere.uk wrote, “The whole town seems to have a depressing feel to it, and most of the time the inhabitants seem to walk around in a zombie like state, probably from the sheer boredom and dismal atmosphere of the place…if Coalville were to be summed up as a smell, that smell would be of urine, damp dog, and cheap cider.”

Perhaps we should have had better luck in nearby Hugglescote where the poet was born, but Linda felt that we had squandered enough time among the Coalville zombies and were better off back with the quiet ghosts of Grace Dieu. So, I steered us back into the beautiful countryside to the south towards Sibson, the tiny village where James Choyce had lived before emigrating to America. 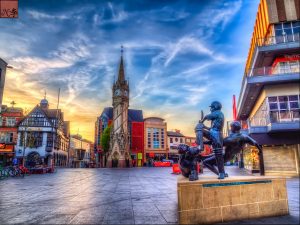 I was having a tough time navigating the back roads that would take us there and mistakenly took us down narrow lanes into Odstone, Congerstone and Shackerstone. After yet another wrong turn, we ended up on a tiny potholed road with a narrow bridge and a sign indicating that it was a “Weak Bridge,” which was not encouraging. Throwing caution to the winds, we drove over it and wound up in Sheepy Parva, which I knew to be a stone’s throw from Sibson.

Again, the question was posed to me by my soulmate; what are we looking for? And again, I wasn’t sure. What was I looking for?

Some kind of connection, I suppose. I wanted to stand somewhere and say to myself, the man who set in motion my very existence came from this place. Some of my ancestors were buried – and probably forgotten – here. I waited for a revelation that never fully gelled.

Sibson was a tidy little well-upholstered town with brick houses, flowery, well-maintained lawns and ducks snoozing here and there on the sidewalks. I walked Kelty into the graveyard behind the church and saw no tombstones with my family name, although it was cool and shaded and felt old and, well, proper.

Like so many small British towns, Sibson had one pub. The Cock Inn claimed to be one of the oldest drinking establishments in the U.K., constructed in 1250. It played a role in the 1485 Battle of Bosworth Field both before and after. That famous robber, Dick Turpin, hid out here from the authorities along with his loyal horse, Black Bess. Turpin is reported to have paid the locals to keep their mouths shut that he was in the neighbourhood. Quite possibly, some of my ancestors took coins from the famous highway man. And, if so, I don’t think I should be proud of that.

Although Dick Turpin has been mythologized as a lovable rogue, the truth is quite the opposite. Frank McLynn of The Independent writes, “The historical Turpin was a rather nasty thug, a butcher’s apprentice who graduated to highway robbery via burglary, robbery and murder.” More myth than man, Turpin was a criminal who became a kind of folk hero. He has even had a sausage and a sex toy named after him. In real life, he was ultimately arrested for shooting someone’s chicken in the street.

And speaking of chickens, The Cock Inn, owned through the ages by the church which kept it open six days a week (not the Sabbath, of course), had a pit in the back reserved for regular cock fights up until the 1870s. The pub today garners some most favourable reviews including that of Brian F. of Nuneaton who writes, “The battered fish was great but the chips were warmed up and a few chips were hard, but the Banoffee Pie was fantastic. Staff friendly and helpful. The best thing is that the wife likes the Cock & the Willey on the A5.”  I am assuming the Willey is the name of another pub thereabouts. 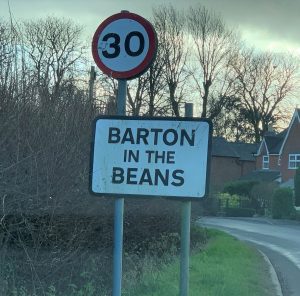 On the way home, I scored a few more wrong turns to add to my list of errors that day and we found ourselves in yet another micro-community with the novel name of Barton in the Beans. Historically, a considerable amount of broad beans were grown here.

Undoubtedly, beans had been grown here dating back to the good Coreiltauvi and their bark shields. A common old quip was, “Shake a Leicestershire man by the collar and you may hear the beans rattle in his belly.” A reference to the town shows up in the famous Domesday Book but today it seems not much more than a scattering of farms and houses, a Baptist church and no pub to be found. There is a wonderful town sign, however, as you enter should you ever want to post a thought-provoking Facebook image of yourself standing beside it. We did not, but in retrospect I wish we had.

Back in our little apartment, we relaxed on the small deck and I gazed off into the fine fields beyond Osgathorpe. The sky was again like a Renaissance painting. Linda went for a run and Kelty and I hiked down to the babbling brook and the treeful of complaining crows, then out into some pasture land where I let him run free among the cropped grass and tall spikey purple thistles until I spotted a bull with a red bandana around his neck waltzing our way. I tethered Kelty and we crept out through the makeshift gate, looping it shut with a piece of bailing wire hanging there.

When Linda returned, we opened a bottle of Malbec and watched the sun slowly sinking in the west over the horses in the field. We talked about how things were going so far on our adventure – this after a rather a trying day of travel due to so many wrong turns. It was just one of those times you get weary after many days on the road and expect there are more to come. Nonetheless, the wine reminded us that a wrong turn can often lead you down an unexpected path and the potential for rewarding experiences you’d never find sitting at home in front of Netflix. ~ Story by Lesley Choyce