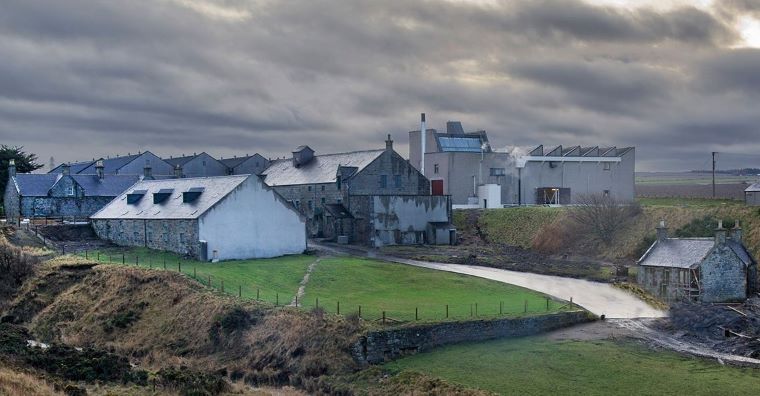 When most people think of Scotland, I would expect that surfing is not among the first things that come to mind. However, on a recent visit to the Glenglassaugh Distillery that is exactly what we witnessed. Before us, on the beach, a trio of surfers was catching North Sea swells on Sandend Bay.

Geographically this area is roughly parallel with the southern tip of Norway and Churchill, Manitoba. And, although it was well into autumn, the temperatures are still in the low double digits, and the waters are warm.

Glenglassaugh Distillery was built during the Victorian Whisky Boom of the late 1800s to supply the explosion in demand for Blended Scotch Whisky. The facility was established at the eastern end of Sandend Bay, where the barley fields of the coastal belt meet the sea. As with many of the distilleries founded in this era, Glenglassaugh has been closed far more often than it has been open. Co-founded in 1875 by businessman Col. James Moir, and a local coppersmith, Thomas Wilson, Glenglassaugh operated for 18 years before a collapse in the industry forced them to sell. The new owners, Highland Distillers, kept the stills running until 1907, but owing to a collapse in demand and a glut of maturing stocks, the business closed, and would remain so for the next 53 years. Though there were a few years of intermittent production in the 1930s, it would take another whisky boom to revive Glenglassaugh’s fortunes.

That boom started to percolate in the late 1950s, and by the 1960s the industry was humming along again. Many of the distilleries that had managed to eke out a meagre existence in the intervening years were upgraded. Several other, long-closed distilleries – like Glenglassaugh and BenRiach – were brought back to life and modernized. In the case of Glenglassaugh, almost everything, save for a few cottages and the warehouses, had to be rebuilt. The distillery quickly earned a reputation for the quality of its spirit, becoming an important component in a number of blends. The post-war whisky boom continued until the late 1970s when it too, as in the Victorian era, turned to bust.

In all, 17 distilleries closed between 1983 and 1986, and Glenglassaugh was one of the last to be shuttered. In 2008, many whisky lovers – myself include – were taken aback when the Russian-backed Scaent Group purchased the Glenglassaugh Distillery, with plans to reopen it. Of all the distilleries that had closed, this was one of the least likely to reopen. Heading the group was a former William Grant & Sons distillery manager, Stuart Nickerson. The distillery was purchased for a not-insignificant sum, including about 400 casks of whisky, all pre-dating its closure in 1986. When they launched their first core range in 2008, it consisted of 21, 30, and 40-year-old whiskies.

Glenglassaugh was acquired in 2013 by the BenRiach Distillery Co., headed by Billy Walker, which was itself acquired by Brown Forman in 2017. Billy put his own twist on the new make, lengthening fermentations and slowing distillations to enhance the fruit notes in the spirit – much as he had done at BenRiach, GlenDronach and now GlenAllachie. Still, most of the credit for the post-2008 whiskies being bottled must still go to Stuart Nickerson.

While the distillery still offers some excellent older whiskies – 30, 40 and 51-year-olds – they also have some lovely younger bottlings too – distilled after the reopening in 200 – including Revival, Evolution and the peated Torfa. Significantly, as it has now been more than 11 years since Revival came to market, some of the post-2008 stocks are now more than a decade old. There is a lot of excitement around future bottlings from this distillery. All the whiskies, both young and old, are still in very capable hands. In 2017, 28-year industry veteran, Master Blender Rachel Barrie, took the reins. She is sure to put her mark on the whiskies also.

Glenglassaugh Distillery is located on the scenic coastal route A98, about 40 minutes from Elgin and an hour and a half from Aberdeen. The distillery is open for tours Monday to Friday from 10am to 4pm. Tours and spacing are limited, so it is best to book ahead. I also recommend pairing a tour with a stop in the picturesque nearby town of Cullen, home of the namesake Cullen Skink soup! ~ Story by Andrew Ferguson