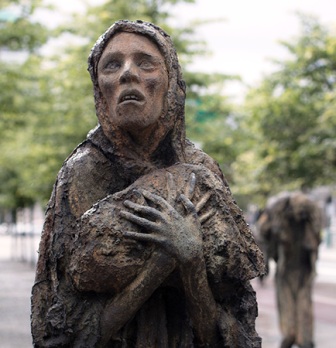 The Great Hunger was the most traumatic occurrence in Irish history. It was an event of such extraordinary horror that it has been difficult even to describe, partly because the use of the term ‘genocide’ is so linked in public awareness with clearly intended mass murder of an ethic group that commentators bristle at referring to the Irish famine in the same way. So, to what degree was the Great Irish Famine a genocide and on what basis could we make such a conclusion?

The official British response to the failure of the potato crop, upon which the Irish poor utterly depended, in 1845 is a stunning indictment of a government into whose union Ireland had, half a century earlier, been corralled. One of the British government’s economic advisers, Nassau Senior, feared that the famine of 1848 in Ireland “would not kill more than a million people, and that would scarcely be enough to do much good”. The following year, the Lord Lieutenant of Ireland, Clarendon, urged the House of Commons in vain not to “coldly persist in a policy of extermination”. When the relief money Clarendon sought was refused, his last available response to the crisis was to urge Irish people to emigrate.

Commenting on British policy in Ireland during the famine, A.J.P. Taylor claimed that“all Ireland was a Belsen”. Taylor was pilloried in Britain for such claims, yet it is a fact that the endeavours of famine relief volunteers were inadequately supported, and forced into bankruptcy. As against the prevailing laissez faire economic theory, prohibiting intervention in the natural running of economic affairs, Taylor’s perspective that landlords who refused to be lenient “refused to recognize that only the gigantic operation of an artificial cause—the exertion of British power—prevented the Irish people from adopting the natural remedy and eating the food which was available for them”. Taylor is quite right: throughout the famine there was a steady exportation of grain and livestock to England which, despite any norm, should have been consumed in Ireland.

Neither does the laissez faire capitalist defense plausibly explain all the misery of the famine, since property of little value to anyone—the small thatched cottages of the poor—were repossessed in industrial quantities during the famine and as many as half a million of them were razed by the British authorities.

What were the consequences of upholding a theory and a system as a pretext to suit Britain’s import demands? As The Atlas of the Great Irish Famine points out, in June of the worst year of the Great Famine, 1847, The Poor Law Amendment Act “transferred the major responsibility for poor relief to Irish property owners [which was a] potentially ruinous liability”. That Act’s ‘Gregory Clause’ ruled that those who held more than a quarter acre of land were ineligible for relief, unless they first surrender their land. John Mitchel, treating of the poor laws in his The Last Conquest of Ireland (Perhaps), hit the nail on the head: “They were a failure for their professed purpose—that of relieving the famine; but were a complete success for their real purpose—that of uprooting the people from the land, and casting them forth to perish.”

The British government’s refusal to provide assistance proportionate to the catastrophe was juxtaposed with generous international donations and fellow-feeling on the part of, for example, the Turkish and Choctaw peoples. Ottoman Sultan Abdülmecid gave £1,000 towards famine relief and today Turkish symbols have been incorporated into Drogheda town’s coat of arms (the Turkish relief ships moored in Drogheda). The plaque unveiled in Drogheda reads: “The Great Irish Famine of 1847—In remembrance and recognition of the generosity of the People of Turkey towards the People of Ireland.”

Yet only the greenest of nationalists could portray the famine as a straight-forward plot to exterminate Irish people. No malice aforethought can be documented since the Phytophthora Infestansin potatoes rather than Westminster’s policies caused the potato blight; there was no Wannsee resolution to determine the course of the Great Famine.

Besides, bitter truths, which counterbalance such uncomplicated portrayals of the event, include the role of thousands of strong Irish farmers (whose financial backing the Catholic clergy gladly received to build churches during the Great Famine) who benefited from the famine by lying in wait for land to be vacated and sold cheaply. Some land grubbers even offered to pay tenants’ arrears in return for possession of the land.The severance in the fabric of Irish society caused by such opportunists reverberates to this day.

Amnesia and revisionism about the ravages of the famine took many forms. Fintan O’Toole has written of Eugene O’Neill’s father whose romanticization of the Emerald Isle led to his telling lies about the precise year in which he left Ireland. O’Neill’s father concealed the fact that the opal tinted Ireland of his infancy was marred by a period of mass starvation of which he was a victim, a buried horror that pervades the plays that his son, Eugene, would write.

The weighing up of genocidal intent of the famine was, in 2013, the subject of a mock tribunal on the Great Famine, held at Fordham University, New York, presided over by Irish Supreme Court Judge Adrian Hardiman. It is hugely regrettable that such a historically aware legal mind as Hardiman died last year without publishing a response on the genocidal dimension of the famine. Hardiman may well have found that the British regime was guilty of genocide in the second degree?