The Hidden Gems of Snowdonia 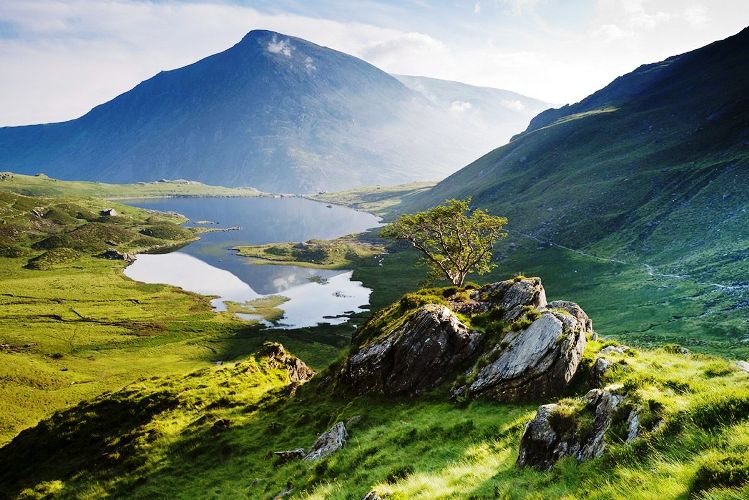 Driving the narrow, twisty lane out of Trefriw in Northern Wales, I doubted that the quality of the crude track had improved much in eight hundred years. Llywelyn the Great, Lord of Snowdonia, traversed up this wooded hill in the twelfth century when visiting Llanrhychwyn Church, since then known as Llywelyn’s Church. Founded in the 6th century by Welsh Prince Rhychwyn, nothing remains of the earliest structure. But with parts of the current building dating to the early twelfth century, the church is considered the oldest in Wales still offering services to this day.

My wife, Lori, and I were exploring historic, but out-of-the-way places in the vicinity of the popular Snowdonia village of Betws-y-Coed. The affable Bernard Owen, local villager and owner of Snowdonia Safaris, was our guide for the day. Having chanced upon Owen during a previous visit to the Capel Gorman monolithic portal tomb, we were impressed by his breadth of knowledge of the area’s ancient sites.

Owen had picked us up at our local accommodation, the charming Tan-y-foel Country House Bed & Breakfast, set in the serenely scenic hills of the Conwy River Valley, a couple miles above the quaint community of Llanrwst. After tea and conversation with our gracious hosts, Ria Smith and Chris Dossi, we were ready to set out. By the end of the day, this part of Wales would hold new meaning for us, as we gained a brief glimpse into the distant past, where Llywelyn the Great and others from his House of Aberffraw flourished for a time. 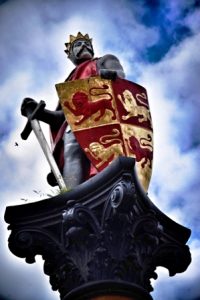 Towards the close of the twelfth century, Prince Llywelyn became ruler of the principality of Gwennyd, the successor state to the Roman Empire covering Northern Wales.

Having sustained a reign of more than 40 years marked by numerous armed conflicts, Llywelyn was subsequently given the name “Great” by Welsh historians.

While in residence at his hunting lodge in Trefiw, Llywelyn was said to have built the Llanrhychwyn church for his wife, Joan, daughter of England’s King John. The straight, rectangular lines of the structure and curved wooden beams supporting the ceiling are consistent with architecture of that time.

When we entered the small church on a rainy summer Sunday afternoon, two parishioners were preparing for the service scheduled to begin. They graciously shared revered centuries-old highlights, such as the square stone baptismal font, aged oak door hung low with wooden hinges, coffin bier hanging on the back wall, and stained glass windows dating back to the fifteenth century. They pointed to one window portraying a somber God peering over Christ on the cross, where upon close examination, God’s hand could be seen holding up the cross.

Sensing that Owen had several more storied locales to show us, we knew we couldn’t stay for the church service. So we bid farewell to our friendly hosts and pushed onward to a nearby marker, memorializing the sixth century literary figure, Taliesin.

Approaching the site, we passed by Llyn Gerririonydd, which our learned guide called a hidden lake, because of its remote nature. Situated high above Trefriw, the lake tranquilly shimmered alongside the forested slopes of Mynydd Deulyn (Mountain of the Two Lakes). Though maintained as part of Gwydyr Forest Park by the Welsh Government, the lake appeared to be a well-kept secret of the local residents. 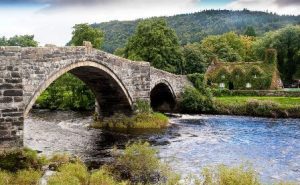 On the far side of the lake we spotted the Taliesin monument, just up from the shore on a grassy green knoll. As Abel Heywood described in his 1869 Tourists’ Guide to North Wales, the lake “is renowned as having had on its margin the abode of Taliesin, ‘the chief of the bards.’ He is said to have been found when a babe on the shores of the lake by Gwyddno Garanhir in the sixth century.” As Heywood reported a century and a half ago, Taliesin was “cherished by the Welsh people” even then. He shared that a prophecy of Taliesin’s “relating to the Ancient Britons, is still extant, and has been remarkably verified; it is as follows: – ‘Their God they shall worship; their language they shall retain; their land they shall lose, except wild Wales.’”

However, the location for the monument was disputed even back in the nineteenth century. As Joseph Hemingway reported in his 1842 book, Panorama of the Beauties, Curiosities, and Antiquities of North Wales, “Lord Willoughby d’Eresby has lately erected a monument which his lordship intended should identify the spot where the poet resided; but unfortunately his lordship has mistaken the site, and placed the column at the west end of the lake, when it is very well known that Taliesin was addressed at Llidiard Coed y Blawd, at the east side of the lake.”

For we modern travelers, either end of this enchanting lake could be equally appreciated for the inspiring quality that the revered poet found here. Lori and I had first encountered Taliesin when visiting the Welsh architect Frank Lloyd Wright’s winter home, Taliesin West, in far off Arizona. Wright admired the poet and sensed that architecture developed and evolved from folk legend and myth, much like Taliesin’s work.

From the hidden lake, we retraced our steps and headed toward a hidden valley south of Betws-y-Coed. On the way however, we stopped at the not so hidden, but still fascinating Tŷ Hyll, the Ugly House. Along the main road between Betws-y-Coed and Capel Curig, the Ugly House appeared as an odd structure whose sides and chimney bulged with misshaped rocks and boulders. Legend has it that a couple of nefarious characters from the fifteenth century invoked an old tradition which stated that if a house was built in a day, the dwelling and surrounding land became the property of the builders. The four foot thick walls, crudely thrown together using moss instead of mortar, gave credence to the incredible story. 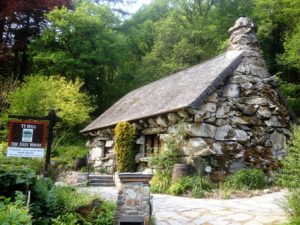 Preserved nowadays by the Snowdonia society, the Ugly House has been transformed into an invitingly cozy tea room and visitor center. Taking note of that, Lori and I returned later for a traditional lunch of Welsh rarebit. The Society has transformed the second floor into an informative exhibit of their local honeybee breeding program, established to support the threatened species. As the exhibit points out, the importance of honey goes back thousands of years. In the tenth through twelfth centuries, the Old Laws of Hywel Dda demanded fines for honey theft. Hywel Dda was a Welsh king from the House of Dinefwr, which competed with the House of Aberffraw for dominance in Wales.

Back on the road, we proceeded to remote Cwn Penamnen valley, near the village of Dolwyddelan. Here what remains of Tai Penamnen reminded us of American Indian ruins that are prevalent in the western United States. All that is left of this fifteenth century community are piles of stones outlining the pattern of the original dwellings. At some time in the past, a landslide had swept over the buildings leaving them hidden from sight.

Owen walked us through the archeological excavation site, which early on was the residence of Maredudd ab Ieuan, a later successor to Llewlyn the Great through the House of Aberffraw.Maredudd was also founder of the Wynn family of Gwydir.

Beginning as a single dwelling, Tai Penamnen was expanded over the centuries by a variety of owners, including a poet and musician, Angharad James, until finally being abandoned early in the twentieth century. Owen pointed out a well and bee boles in the remains of the wall. Bee boles were the ancient predecessors of the modern bee hives, such as those described at the Ugly House.

Nearby we spotted the square, three story gray tower of Dolwyddelan Castle, looming from the top of a prominent hill. Guarding a main route, the castle was thought to be built by Llewelyn the Great in the 13th century.

Known to have captured a number of castles during his rule, Llewelyn was considered, from a practical standpoint, to be the first Prince of Wales.

And though he never claimed that title, he was instrumental in the effort that forced his father-in-law, King John, to sign the Magna Carta in 1215. 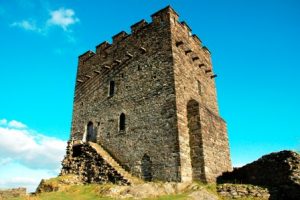 Dolwyddelan Castle came into play for the House of Aberffraw again in the 15th century when Maredudd ab Ieuan acquired and upgraded the fading bastion for his residence, prior to moving to Tai Penamnen. In between times, the armies of England’s King Edward I had controlled the castle for awhile when Wales was conquered in the late 13th century.

Even Lord Willoughby d’Eresby, mentioned above in connection with Taliesin’s monument, had a role restoring Dolwyddelan Castle in the 19th century. As it turns out, Willoughby became owner resulting from his standing as a descendent of the Wynn family of Gwydir.

Squeezing in one final stop before returning to Tan-y-foel, Owen paused the car for a moment by picturesque Pont Fawr, a narrow three-arch stone bridge over the River Conwy in Llanwrst. The bridge was built in 1636 by Sir Richard Wynn, yet another descendent of the House of Aberffraw. Llanwrst, like Trefriw, was known in earlier times for the wool trade. Nowadays, tourism is a bigger draw. The pretty little town afforded a fitting end for our journey, given that the parish church there was the final resting place of Llewelyn the Great.

With our foray to out-of-the-way spots now finished, Lori and I marveled at the rich history that accompanied the seemingly obscure hidden gems that Owen had shared with us. So much so, that the next day we returned to another of the lost treasures that we had originally found with Owen. Fairy Glen is an enchanting little gorge accessible by a popular walk from Betws-y-Coed. Owen described a legend that claimed if you went there on the night of a full moon in summer and sat on a rock in the glen, a fairy would tap you on the shoulder and talk with you.

Fairy Glen, while beautifully scenic, exuded an eerie quality that was spooky enough that we decided against tempting the legend at night. Instead, in the afternoon we located the unique place along the glen that eluded all but the most thoroughgoing visitor. 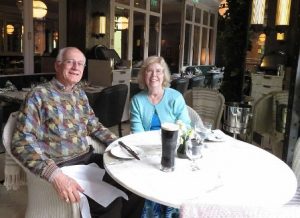 Looking down on Fairy Glen through thick trees and ferns from an old stone bridge crossing the Machno River, another much more ancient bridge could be seen. Dating to the 14th century, now overgrown with hanging greenery, the narrow bridge had served drovers of that era tending their cattle and sheep. We could only imagine if any of the characters from our visit to the other sites had placed foot on this bridge so long ago.

The following morning, our sojourn at Tan-y-foel drew to a close. Over one final sumptuous breakfast, we entertained our hosts, Ria and Chris, with tales of wonder gleaned from the nearby hallowed settings, whose historic events and people we had but glimpsed from afar. Grateful for the information, Ria then asked, “Have you been to the slate mines. They’re full of history.” “No,” I said, “but that gives us an excuse to return someday.” ~ Story by Gerry Herter