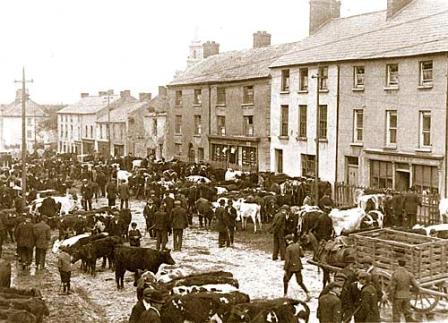 Fairs played a vital role in the rural Irish economy. Farm income depended on the seasonal sale of stock or crops, and the fairs were where these transactions took place. Some fairs were just for cattle, or sheep or pigs, others were more general, and items sold included hay, turf and potatoes, as well as turkeys, geese, calves and bonhams.

Each fair or market was held on a set day, marked on the farmer’s calendar, and the life of the farm revolved around having the stock ready for each fair. The biggest fair days were in February and October. The biggest fowl market was in December.

Fair days were held for centuries on the same day of the month, so tradition was of huge importance, and the fair days were oriented to the seasonal production of stock and crops, unlike today, where the mart is open most days of the week.

While they all read the ‘Farmers Almanac’, farmers knew their fair day dates off by heart. So too did the shop-keepers in town know what dates the fairs were held on, and that made for a large injection of money into the life of the market towns up and down the country.

I remember the fair days in Loughrea in the early 1960s, before the mart was built. We got the day off school on fair days, so we loved the tradition, though not the inconvenience of the fairs. Personal safety aside, we got the day off because of the amount of liquid slurry that lined the streets and the footpaths and made walking around town on a fair day, a rather mucky, smelly business for a young ‘townie.

Pigs, bonamhs, calf and fowl (geese, chickens, turkeys) fairs were smaller events to which the animals and fowl were brought to town, confined inside the creels of the cart, which was drawn by a horse or a donkey, though I remember several mules and jennets pulling carts, as well.

The sheep and cattle fairs were much bigger affairs. The animals began arriving for the big cattle fairs from around 9 p.m. the night before, with canny farmers and their bleary-eyed sons staking out traditional pitches, where generations of each family had always sold their beasts. Such a territorial spot was important and also considered ‘lucky,’ so it was always on their minds to get to town early and secure their ‘sweet spot’ for selling their cattle or sheep.

Sheep fairs were a sight to behold. Unlike cattle, sheep had to be penned, or they would simply disappear into the night. To achieve this, men brought wooden hurdles with them to town, a day or two ahead of the fair and by prior agreement with the townsfolk or shop-keepers, they marked off their spots. On arrival, the night before the fair, they tied the hurdles to the fronts of houses, shops, gateways, whatever they could find, and wherever they could, and made a three-sided pen into which they herded their sheep and lambs. I remember seeing the full length of Main Street on both sides, penned off in this manner, with perhaps a half mile in total of sheep pens up and down the road, strapped to the fronts of each and every business premises on the street. There were probably thousands of sheep and lambs in town for those fair days, most destined for the Sunday roast or the Irish stew.

My mother owned a ladies drapery shop, which had two big plate-glass display windows, perhaps 3 metres wide on the front of the shop and an elegant, wide, glass doorway in the middle. The sheep pens were tied right up against the shop windows, filled to bursting with huge woolly bleating sheep with panic in their eyes and escape on their minds.

My Dad had the local blacksmith make special wrought iron grids to protect the shop windows from being stove in by the press of the sheep in the pens. After the fair, I would be given the task of hosing down the footpath and the walls of the shop, brushing away the yards of sheep poo. Then I had to get the lanolin oil off the windows and have them gleaming for the morning. I don’t think I’ll ever forget the smells.

Cattle fairs were very different. Cattle can stand in groups for hours without wandering off, with a little minding, so no pens were needed. Hundreds of cattle would fill every street in town, and while to the stranger it must have looked chaotic, it was, in actual fact, quite organised, with each farmer’s cattle being watchfully guarded and herded so they weren’t just in one huge herd. This ‘minding’ of the cattle was done by the boys, and they had a difficult task of it, but they were used to minding cattle, unlike me, who was terrified they might bite!

Once the cattle were in place, the men went off to gauge the market, or meet the cattle jobbers, leaving their sons in charge of the cattle they’d just driven into town. For all of them, it had already been a long, tiring night, walking the cattle as much as 10 miles in the dark, possibly in the rain and certainly in the cold, running ahead to stop the cattle turning off the road, down bohareens, or into front gardens of roadside houses.

They may have been tired, but they were excited, too, at the responsibility they now had for their farm’s valuable stock, and at the notion of being in ‘town’ for the fair, with its change of scenery from their rural pastures. The cattle, too, sensed the excitement, looing and mooing, skittishly threatening to break from the herd at any moment, prodded back into line by the boys, yelling and ‘hullahing.’

The streets were a mad cacophony of animal and man sounds, echoing around the dim, foggy streets of the town. There always seemed to be mist, whether that my dimming memory, or the combination of cold, damp steam rising from backs of the cattle, their soft, musty breath condensing in the cold night air, and the blue wisps of smoke from the coal and turf fires wafting down through the throng. The smells were incredibly vital, fresh, dungy, wet, musty, but to a very high volume, if smells can have a decibel level.

The boys wore their working clothes, many wore duffle coats, the 1950s hoodie, but their hands and faces, and their bare legs over the tops of their too-big wellingtons, were raw from the moist cold.

The men were the same, though many of them were dressed for town, a serviceable suit or jacket, and a heavy overcoat, and of course they too wore wellingtons, or big boots. The jobbers, distinctively dressed, were dapper in their broad-brimmed hats, velvet-collared Crombie coats and bright ox-blood slip-on boots.

Everything was for sale, strippers, heifers, bullocks, and bulls, all destined for further fattening in the midlands, or for killing by the butchers in the local towns, or in many for shipping up to the big abattoirs in Dublin.

By 2 or 3 a.m., the fair was in full swing with buyers, jobbers and sellers all engaged in their deal-making. The big cattle-jobbers moved very efficiently through the fair, buying huge numbers of cattle, doing deals on the street, slapping palms, agreeing the price and the terms, counting out tenners from huge wads in their pockets. Most cattle were bought on appearance, very few were weighed. A good jobber would check the teeth of the beasts to confirm their age and in minutes size up the animal and offer a price.

Nowadays, in the mart, no one checks teeth anymore, they just go by weight.

Buyers, back in the fair days, would learn quick enough what farms produced heavier cattle. Good, sheltered land produced big strong ‘store’ cattle, perfect for fattening. Other areas where the land was wetter, or poor, would produce light cattle, and they would command lower prices. Some towns had a weigh-bridge for weighing cattle, but most sales were not done by weight.

There was a tax, or toll on all animals sold and bought at the fair and that was collected by an appointed agent who usually had someone at all exits from the town, collecting a few shillings in tolls from each farmer and jobber, and after deducting their commission, the rest of the money went to the council, to help defray the cost of cleaning up the town after the fair was over! The Fire Brigade would hose down the whole town, all the footpaths and shop fronts, but as you can imagine, the smell of the liquid slurry was deadly! I don’t know how the town’s sewers handled all the extra brown gold, but it did.

Many cattle, just like generations of our people, were destined for England. Those just-sold cattle were herded off by drovers to the railway station where they were held in track-side pens, for later loading onto dozens of cattle-cars that had been shunted into place the day before, for onward shipping to Dublin, where they would catch the boat to Holyhead and on to the English markets. Other cattle were loaded onto cattle lorries with high creels, and off they trundled to their destinations all across Ireland. Many jobbers would go off buying on a Sunday night and be gone for a full week, buying at several fairs and shipping all the cattle to large pens in Dublin, from where they were sent to places as far away as Glasgow, Glouster and Manchester.

By midday, palms were spat upon and slapped, deals done and settled, wads of paper money exchanged, luck pennies given. Those with bank accounts headed off into The National or The Hibernian Bank — those without accounts headed to the hills and their mattresses.

The wee boys were given a tanner (a six-penny bit, 6d or about 2 cents) or a few bob for their services, and they made a beeline for the vans seeking outrageously thick ham sandwiches, or they hit off to the sweet shops.

The men were not done yet. They met up with their wives who had come to town in the pony and trap at a more civilised hour. They settled a few bills around the town, the hardware shop, the grocery, the drapery and the insurance office. In later years, they went to the bank, to pay off an overdraft or lodge some money to the farm account.

Almost universally, before they headed home, they went to the pub, usually a pub-grocery, where they bought some shop goods, biscuits and sausages, or a side of bacon. The men stood at the bar, the boys waited in the ‘lounge,’ while the wives went about town, buying some necessities for the house or for themselves, a dress, a coat, some wool for knitting, a luxury or two, perhaps. It was also a time to visit the match-maker, and many’s a farmer came to town with a few cattle and returned home with a wife!

Finally, after enjoying a few pints of stout, with their friends, or neighbors, they made their way home, in the pony and trap, home to the farm they’d left almost 24 hours previously.

Back on the farm, the cycle of farm-life started again, while over in the town, the big clean up was under way, and the smells only got worse before they got better!

The arrival of the ‘Marts’ in the 1970’s spelled the end for these ‘fairs’ all across Ireland.

Supermarkets and refrigeration killed off the Fowl markets. Today our children have no idea what happened when the country folks came to town! They surely missed out on some very rich culture, oh, and some great manure!