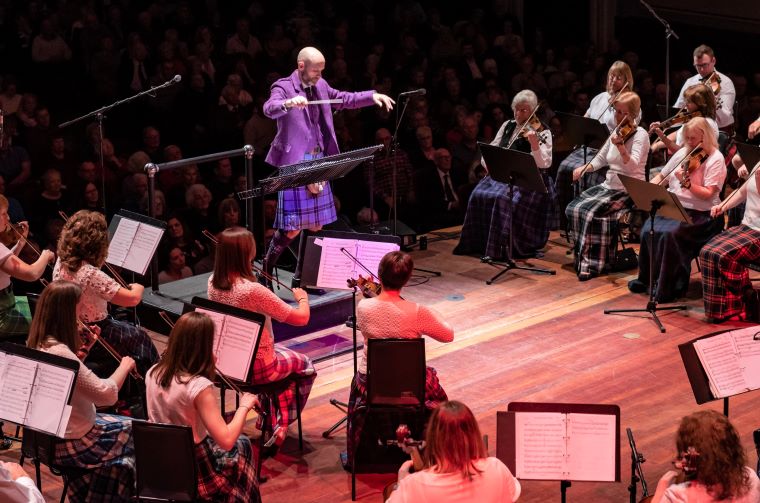 As Blair Parham puts it, he started to play music “properly” at the age of eight.

“I say ‘properly’ as I began learning the recorder when I was in London, but this was during whole-class music lessons.”

Growing up in Ayrshire Riviera (commonly referred to as Ayr) – after spending the first few years of his life in Argyle, Wales and London – Parham was surrounded by music.

“I took a listening test in school to determine whether I was able enough to play and was offered the cello as the instrument to learn,” he shares from his home in Troon, Ayrshire. “I jumped at the chance as my best friend played cello already. I kept up with both the recorder and the cello and competed quite successfully with both in the Ayrshire Music Festival as a soloist and in ensembles and orchestras.”

“Scottish trad was a little bit different to the ‘regular’ classical stuff I had been playing. However, being in the AFO meant I could go on their international tours! When I was a playing member, I travelled all over Europe, the States and Canada. I eventually left the AFO as a player and returned as one of the Directors. In addition to Europe and North America, I travelled with them to Australia, New Zealand and China.” 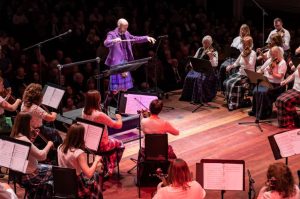 Parham continued to play with the AFO until 1995, when he joined the Scottish Fiddle Orchestra (SFO).

“I auditioned in front of the leader Bill Cook and the leader of the cello section, Irene Wood. I remember vividly just about to start and in walked this massive figure who sat down next to Bill and Irene. That was the first time I met the late, great John Mason, the founder of the orchestra.”

Starting out on cello, Parham quickly got involved with two smaller groups within the SFO, including the orchestra’s Glee Club. Later, in 2008, he was asked by Mason (then SFO conductor) to work as his understudy.

“He had a few health issues, so I did parts of some concerts to help him. Before he sadly passed away in 2011, he passed the baton over to me and I became conductor and joint Musical Director alongside the leader Bill Cook, who sadly passed away in September 2019. When I took over the baton, because of time and my new responsibilities, I had to stop playing the cello.”

Although he acknowledges the challenges of the gig – particularly finding a balance between modern and traditional musical styles – Parham says the rewards outweigh the difficulties.

“I get to meet wonderful people from all walks of life and get to spread the joy that is Scottish music.”

Currently on hiatus due to the COVID-19 pandemic, Parham continues to work with his art company, Scotia Arts. And though he believes the state of Celtic culture and music is in a relatively strong place, he does feel that more can be done for Celtic music and arts within the educational sphere.

“There is a huge ground swell of public opinion against fees for instrumental music tuition, something that has been brought in by most councils relatively recently. I doubt I would be where I am today if it wasn’t for the free tuition I received in the 80s and 90s. Hopefully the government and local councils will treat music and music education in the same way it does with the likes of Maths, English and Science and realize it is an essential part of a young person’s development. There is a lot to look forward to in Scottish Music – but we must be mindful that music is not forgotten in education circles.”