The Secret Lives of Elves and Faeries 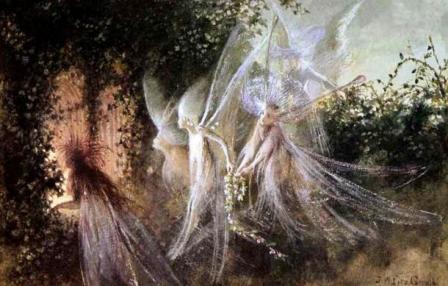 Born in 1644 in Aberfoyle, a parish of Perthshire, Scotland, Reverend Robert Kirk is remembered for apparently making great strides in bridging the gap between the human and faery realms. He was the seventh son of his parents James and Mary, and went on to become a very intelligent, studious man. Attending the University of St. Andrews and the University of Edinburgh for his Bachelor’s and Master’s degrees respectively, Kirk chose to follow in his father’s footsteps by becoming an Episcopal minister in Scotland.  In the Christian world, he is known for having completed and published one of the first translations of the Bible into Gaelic. But aside from his work in the realm of humans, Kirk had spent much of his life enamored and immersed in the tales of faeries.  This fascination is what propels Kirk’s name to the forefront of folkloric research.

What Reverend Robert Kirk is most known for, though his Biblical works were pertinent in his time, is the legacy of the faery race that he left behind. His The Secret Commonwealth of Elves, Fauns, and Faeries is thought today to be one of the best contributions to modern scholarship on the faery realm. What is most intriguing about this text however, is that it was initially believed to have been an amalgamation of legends and myths the reverend collected during his life, condensed into a single work.  Yet in more recent years, there is a belief that the earlier editions of Kirk’s manuscript are actually much more personal.

One scholar in particular, John Matthews, claims to have found an early copy of the reverend’s manuscript, which bizarrely claims that Robert Kirk did more than collect Scottish tales, he lived them. This earlier edition, called The Secret Lives of Elves and Faeries , is caveated in its title as having come directly from the “private journal of the Reverend Robert Kirk.” It reads like a journal as well, and dictates Kirk’s supposed journey from Aberfoyle to the “Lands Beneath,” the faery realm below the earth, and the interesting discoveries he found there.  Kirk describes in great detail the Seelie and Unseelie Courts (the good and bad faeries), faery food and faery dress, their “books of light”, and numerous faery tales told to him supposedly by the faery folk themselves.

Though he reports being warmly welcomed into the kingdom of the Seelie Court and treated well there, Reverend Kirk’s journal further dictates that, while below ground, he broke the rules of the Unseelie Court. Kirk ventured into the domain of the Unseelie, something forbidden to the race of mortal men. Kirk had known this as he had trespassed, and knowing the rule he was breaking, made his circumstances all the worse.

This venture supposedly resulted in Kirk’s trial at the hands of the Unseelie and Seelie alike—as one could not decide a ruling without the agreement of the other—during which Kirk’s declaration that he would gladly forfeit his life to protect their secrets softened the court to him and offered him a choice between two punishments: to either die for his crimes, or to leave the world of his people and live the rest of his days in the faery realm. Kirk, so intrigued by all he had seen, chose the latter of the two “punishments”, and only requested a brief return to the world above to get his affairs in order. This, many believe, is the true reason behind Kirk’s mysterious death in 1692.

It is said that Kirk greatly enjoyed taking walks in the evening, both in his childhood and his adult life, visiting the faery mounds of Aberfoyle that he had taken great pleasure in exploring all his life. His body was found in the morning on the faery hill, and legend spread throughout the region that Kirk had not truly died but had instead gone to live among the faeries as the chaplain to the faery queen. Kirk never actually published his faery writings for himself. Rather they were discovered posthumously and published by Walter Scott in 1815—not as a journal, but as a text of legends of the faery race. Yet without his journal, Kirk quickly became regarded as having expert knowledge of the ‘Lands Beneath’.
John Matthews, in his research, recovered a letter to Kirk’s son Colin dictating that Kirk had chosen to live the rest of his life in the court of the Seelie. However for many long years after his death, Kirk himself had become a faery legend. In many ways, he still remains a legend, as only so much can be believed from the supposed journal of a man fascinated by the races of the underground. Whether he truly ventured to the ‘Lands Beneath’ or had a magnificent imagination for that which he was most passionate about, Kirk remains the epitome of faery realm knowledge.