Denise and Joe Carbone knew they wanted to bring Welsh cakes to the United States. They just weren’t sure if it would work.

“It was more of a risky, long-shot, seat-of-our-pants experiment than anything else when we started,” says Joe, one half of the husband-and-wife team. He is of Italian-Irish heritage, while Denise has her roots in Wales. Born in the Welsh town of Usk, Denise made her way to southern California when she was in her twenties. She worked as a nurse before marrying Joe, later becoming a full-time mom with two children.

After the birth of their second child, Denise reconnected with her inner Celt and learned how to make Welsh cakes: a pancake-like treat cooked on a griddle. They became a family favourite recipe, and though Joe suggested Denise start selling them, she had no intention of running head-first into a business alone while raising kids. In 2009, after Joe was laid off from his job in information technology, the couple went into business together.

“We didn’t get lofty with ideals and mission statements,” Joe recalls via email. “We thought it would be better to figure out if we could even make these unique, unheard of, hand griddled cakes reliably, efficiently and profitably. We also needed to see if anyone would care. 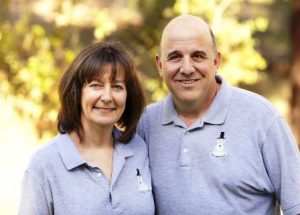 “We spent six months developing a cooking method, with many false starts. We almost gave up several times. When we felt we had a method that was scalable and could grow with demand – if there was any – we were ready to start production.”

Thus, The Welsh Baker was born. In the beginning, Joe notes, their market was quite small and “very few people were searching the web looking for” Welsh cakes. “We basically had to introduce them ourselves and find our market…”

Those early days involved doling out a lot of free samples to get folks familiar with the product.

“As our reputation and familiarity grew and as we got better at what we did, we invested in better dough-processing machinery that increased our output and shrunk our waste,” he continues. “Sampling also became less necessary – people lined up to buy our cakes because they already knew they liked them.”

As popularity increased, the Welsh Baker expanded their product line to include chocolate-dipped Welsh cakes and oven-baked scones. And though the business now produces goods for wholesale, its market focus remains in retail; at fairs, festivals, and via the internet.

“Over time, our mandate has evolved to being ‘the premiere purveyor of Welsh Cakes in America.’ We feel we have attained that mandate.”

In fact, the Welsh Baker claims to be the largest maker of Welsh cakes outside of Wales itself.

In 2014, the Carbones introduced a new option to their product offerings; mobile tea room vending.

“Many people asked if we sold coffee or tea,” explains Joe. They’d previously felt they couldn’t justify “the step-up in complexity of operation between selling a prepackaged food-to-go verses selling food consumed on site” – health regulations, equipment and trash management, for example. 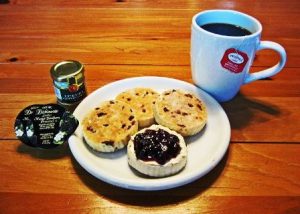 “Still, we realized that if we could turn our field operations into more of a ‘tea room’ setup, offering customers complimentary coffee, tea, clotted cream, and lemon curd, it would have an impact on the way people tasted our product for the first time. The process became more of an experience than that of a grab-and-go vendor.”

And while the cakes are still the couple’s primary product, the full “Celtic Tea Experience” is a large piece of the setup when Denise and Joe are out in the field: scones, Scotch eggs and sausage rolls are all part of the spread.

Joe says he and Denise “live and breathe” their business, so they have very little personal time. However, the experience is rewarding. “Whereas, we used to make a bunch of cakes and ask ourselves, ‘Do you think we will sell these?’ we now look at our schedules and orders and ask, ‘Do you think we can make enough in time?’”

After nine years, the company, and the couple, continue to grow.

“When we are old people in a rest home, we’ll have a great story to tell.”