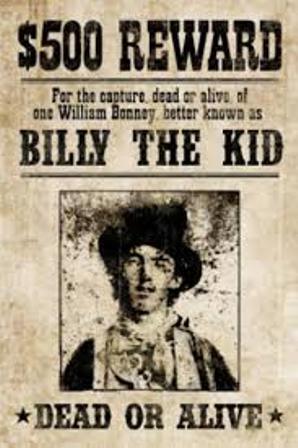 The Irish have a history of rebellion and renegade behavior. Here are the ten most famous Irish men – and one woman – who lived outside the law.

1. Billy the Kid: (1859–  1881)  real name William McCarty has become one of the legendary figures of the Wild West. His mother was an Irish immigrant who grew up in Ireland and raised her son in a New York slum before heading out west.

2. Ned Kelly, (1855 – 1880) iconic figure of Australian legend, son of Tipperary emigrants who has come to symbolize the rebellious Australian spirit

3. James ‘Whitey’ Bulger: (1929 —) A Boston mafia kingpin who is reputed to have killed or ordered the killings of up to fifty people.

4. The Pirate Queen: (1530 -1603)  Grace O’Malley, famous Irish sea pirate of the 16th century. Her fame became so great that Queen Elizabeth 1 summoned her to London in order to meet her. The Broadway Show ‘The Pirate Queen’ was based on her life.

5. Emmett Dalton: (1871-1937) The Dalton gang were al known as the ‘Wild Bunch’ one of the most famous train  robber families in American history. Emmett Dalton was a ringleader and the only survivor of the famous Coffeyville shootout in 1892.

6. James Freney (1719–1788) was an Irish highwayman.the most famous of that era, His family in Kilkenny had their lands taken from them by the English and Freney took to highway robberies to get revenge. Pursued all over Ireland he managed to escape into exile but his body was later brought back to Kilkenny where he is still alive in the folk memory there.

7. John “Legs” Diamond, real name  Jack Moran (July 10, 1897-December 18, 1931),was the son of an Irish immigrant. Also known as  Gentleman Jack he was   a famous Irish American  gangster and bootlegger in New York city  during the Prohibition era. Famous  for surviving numerous attempts on his life

8. Owney “The Killer” Madden (December 18, 1891–April 24, 1965) was a leading underworld figure in Manhattan, most notable for his involvement in organized crime during Prohibition. He also ran the famous Cotton Club and was a leading boxing promoter in the 1930s.Though English born, his parents were both from Ireland.

9. Charles Dean O’Banion (8 July 1892 – 10 November 1924) was an Irish American  mobster who was the main rival of  Al Capone during the brutal Chicago bootlegging  wars of the 1920s. The newspapers of his day called him  Dion O’Banion, although he never went by that name.

10. Michael Spillane, much better known as Mickey Spillane (July 13, 1934 – May 13, 1977), was an Irish-American mobster from Hell’s Kitchen . Spillane, who was called the “last of the gentleman gangsters,” was a marked contrast to the violent Westies gang members who succeeded him in Hell’s Kitchen