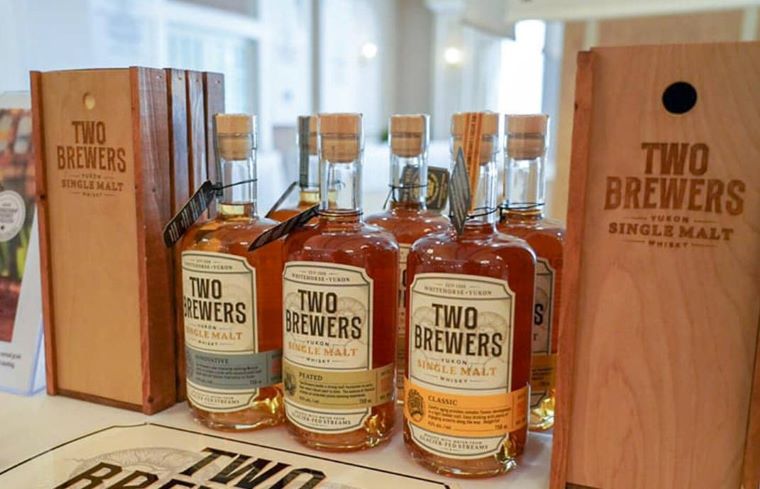 On the surface, Two Brewers seems like a strange name for a whisky brand. One of my pet peeves (which, in “the customer is always right” world of retail I am usually loathe to correct) is hearing someone talk about brewing whisky, or a whisky brewery. You brew beer in a brewery and distill whisky (technically spirit) in a distillery. But – and there are a couple of buts here – on peeling back the layers there are two very appropriate explanations for the whisky’s name.

First, there is that awkward little fact that before you can distill barley (or any other grain for that matter) into spirit, you must first make a beer. Just as when making brandy, you have to start by first fermenting grape juice into wine. The fermented grain liquid produced by distillers is called wort and is not the sort of brew most would willingly ingest in copious, let alone modest quantities. However, for all intents and purposes, it is a type of beer.

Secondly, and most importantly, Two Brewers Whisky is made by Allan Hansen and Bob Baxter, the pair who founded Yukon Brewing in 1997. Twelve years after starting out as brewers in Whitehorse, Yukon, Bob and Allan decided to try their hand at whisky making. The Ontario natives were well ahead of the craft brewing curve in Canada, and they would soon prove to be at the head of the craft whisky making curve as well. In recent years, dozens of new Canadian distilleries have launched craft whiskies, mainly Scottish-style single malts, and there are many more still to come. While Two Brewers were not the first to do so, they were certainly among the leaders of the pack, and they have also been one of the most successful. 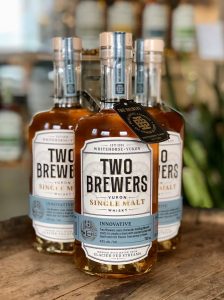 Most distilleries strive for consistency and efficiency, selecting yeast strains for speed as well as to maximize the conversion of sugar into alcohol (yield). Breweries on the other hand – especially smaller ones – are more willing to experiment with different yeast strains and different mashbills (types of grains and ratios thereof) to create different flavours and distinct styles. Yield is still important, but flavour is key. While brewers have to rely on the flavours created in fermentation, most large commercial distilleries believe fermentation plays a much less significant role than distillation and maturation in oak. I think they are wrong on that count, but that argument would be a whole other article.

I have been in the drinks business for more than 16 years: I have had the opportunity to sample tens of thousands of different whiskies and I have made hundreds of visits to distilleries all over the world. Over time, I have concluded that fermentation is just as important, if not more so, than distillation and maturation. The quality of the alcohol and flavour congeners created during fermentation set the stage for what the stills and barrels do thereafter.

Whether intentionally or not, the chaps at Two Brewers are on the right path.

Allan and Bob have only been making whisky for a little over a decade, taking a brewer’s approach to producing primarily single malt whisky. The whiskies have been released in very small batches, rarely over 1000 bottles, and usually much less. Each release corresponds to one of four different styles: classic (unpeated single malt), peated (made with peated barley), special finishes (finishing maturation in different cask types) and innovative (a catch all for different grain types and unusual production methods).

At the time of writing, Two Brewers have just bottled Releases 19 & 20. Release 19 is a peated single malt, made with barley, and malted and peated in Scotland. When barley is dried over a peat fire or smoked by peat in a modern malting plant, the smoke leaves behind phenols on the grain. These phenols can give the whisky a smoky, earthy and sometimes medicinal profile. Two Brewers Release 19 does not have the maritime profile associated with most Islay distilleries, but it does have a backbone of crisp but elegant smoke.

Two Brewers Release 20 is perhaps the most unusual to have come out of the distillery yet. It was matured in maple syrup barrels. This is not something which would ever be allowed under Scottish whisky regulations, but the rules in Canada are more relaxed. It is a sweet and very spicy whisky, perfect for those with a sweet tooth.

The production of Two Brewers Single Malt by Yukon Brewing & Distilling is limited, as is its availability. The brand is currently available in the Yukon, Alberta, BC and occasionally in Quebec. If you were looking for a good excuse to visit the Yukon, this might just be it. They are currently closed due to Covid-19, but they will reopen in due time. Their beer is nothing to sniff at either… their Midnight Sun Espresso Stout has been a staple on the Canadian Craft Beer scene for decades! – By Andrew Ferguson