Vinegar of the Four Thieves 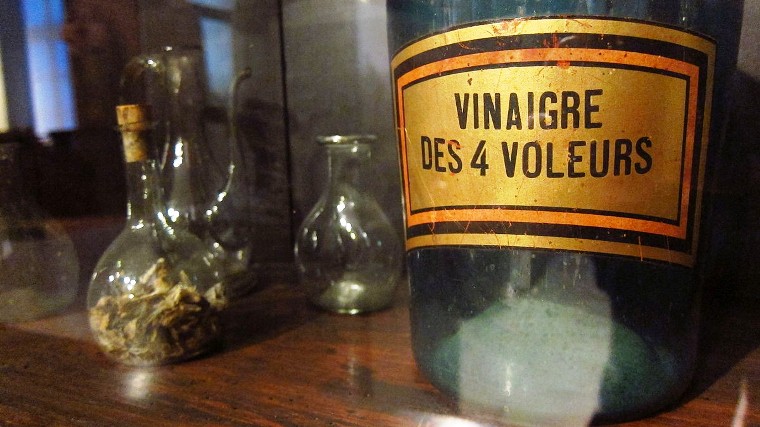 This recipe is perfect for summertime ~ enjoy it as both a vinaigrette and/or as an insect repellent.

During the 17th century, the bubonic plague ravished the city of Marseilles, France. It is reported that a band of thieves and other “ne’er-do-wells” remained immune from the plague by covering their bodies and faces in a vinegar that had strong antibacterial and antiviral properties. This allowed them to assail homes at night and rob graves at their leisure. The plague, which spread by insect bites, did not seem to have any effect on them. Finally, they were caught in the act, imprisoned, tried, and condemned to death. However, the courts offered the prisoners leniency – death by hanging rather than being burned at the stake – if they would reveal the secret of their resistance to the Black Death.

The thieves acquiesced and surrendered their recipe:

Take of rosemary, rue, wormwood, lavender, sage and mint, a large handful of each. Place in a stone jar and turn over it four quarts of strong vinegar, cover closely and keep near the fire for four days; and then strain and add one ounce of pounded camphor gum.

Here is my modern-day take on their powerful potion.

Toss herbs and garlic together in a 1- quart mason jar, cover with vinegar and allow them to marinate for 7-10 days in a sunny location. After this period, strain the vinegar through a fine mesh sieve into a second clean mason jar. Store at room temp. until ready to use and serve as you would as a vinaigrette or as a seasoning for braised meats and vegetables.

This recipe has many uses: dressing a doorway to keep enemies at bay, as a natural cleanser for shiny counters, as a skin beautifier, and as a marinade for braised beef and vegetables. However, my favorite is that of insect repellent: simply mix ¼ cup of prepared vinegar in an 8 oz. spray bottle and fill with water.