Walking Routes and Cycle Paths in the Isle of Man 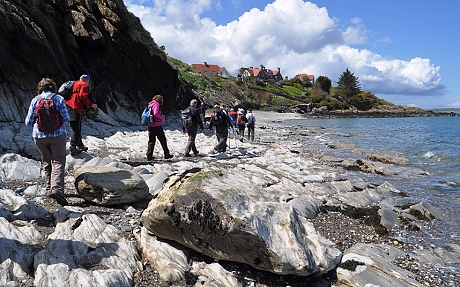 The path plunged steeply into a Tolkienesque world of tangled trees, misty waterfalls and mossy stone bridges – beneath which there were surely fairy rings? Yet, only minutes before, I’d been firmly in the 21st century as I pulled on my walking boots in the car park. Walking on the Isle of Man is nothing if not surprising.

I was doing an eerily pretty walk down Dhoon Glen, north of Laxey on the east coast, a ravine of slender birch trees, fern-covered rocky slopes and a ravishingly pretty tumbling stream. Other than one family at the start, I had met no one. I felt I’d slipped back through the centuries to a dreamy otherworld.

It was a shock when the trees suddenly cleared and I found myself in a tiny, deserted cove. The pebbles were perfect for skimming and I spent a happy half-hour trying to beat myself by skimming the longest “hops”, before taking the path up over the headland (disturbing a herd of woolly brown goats; I’m not sure who was most surprised) and back to the car.

Dhoon Glen is one of around 20 glens on the island, both coastal and inland, which make for pretty walks at any time of the year. Another surprise of the walking here is the sheer variety, despite the island’s modest size. You can blow away the cobwebs by striding up the inland fells – from Snaefell, the highest at 2,036 feet, you can see Scotland, England, Wales and Ireland – or you can pootle along quiet rivers, such as Silverburn from Ballasalla to Castletown.

The easiest way to pick up a walk is to head to the coast – made even easier if you have your own vehicle with you, which you can bring across on the Isle of Man Steam Packet Company ferry from England, Northern Ireland or Ireland, filled with all you need for a rewarding break.

The 95-mile long Raad Ny Foillan, or “Way of the Gull”, encircles the island so you can start and stop where you want. The views are stunning: cliffs, hidden beaches, seabirds and seals. Many walks can be combined with a historic rail journey, which means you may be tempted to leave the car at a station. Want a challenge? Try the Millennium Way, a 25-mile hike from Ramsey to Castletown following the ancient Royal Way.

You can equally well explore the island by bicycle. Indeed, you could argue the island is made for cyclists; it honed the early skills of Tour de France star Mark Cavendish as well as Olympic gold medallist Peter Kennaugh. Bringing your bicycle across to the Isle of Man is easy when travelling by ferry. Simply ride onboard through the car entrance and then relax in one of the lounges whilst enjoying the crossing.

Not only is it simple, it is also great value as bicycles are carried free of charge when accompanied by a foot passenger, or why not load your bicycle in your car with everything else you need and take advantage of one of the great Steam Packet Company car offers.

If you haven’t room in your car to bring your own bikes across, you can hire them in one of the main towns and decide whether you want some tough up-and-down routes through the glens or gentler rides along country lanes.

One relaxing ride starts from Ramsey and potters around the rich agricultural plains of the north, through pretty Bride village, detours to the wildlife-rich shores of Ayres Nature Reserve and returns passing the striking Romanesque-style church of St Jude’s.

If you prefer to pick up speed with the aid of four legs, there are several riding stables on the island offering hill-trekking, beach rides and quiet meanders along country lanes – something I’d love to return to do soon. One advantage of a horse is to be able to see over the island’s distinctive tall hedgerows called, rather unflatteringly, “sod” hedges. You can even go exploring by Segway if you care – teenagers certainly seem to love them.

On my last day I explored part of the coastal path at Port Erin in the south-west. I zig-zagged my way up Bradda Head, at the northern end of the lovely sandy bay, to Milner’s Tower. This curious structure – part square tower, part round tower – makes sense when you discover it was designed to resemble a key. It was built as a thank you to William Milner, a 19th-century Liverpudlian safe-maker, who was a great benefactor to the poor of Port Erin.

From the top of the tower I could see Spanish Head at the southern tip of the island, the Calf of Man bird sanctuary islet, Port St Mary to the east and, further still, the headland of Scarlett Point.

Continuing north, the path alternated between gorse-covered moorland when it turned inland and springy grass and heather near the cliff edge. Seabirds screamed and swooped down the rocky cliffs to the sea dizzyingly below. It was only the fading light and the rumble in my tummy that persuaded me I should turn round and head back. I tell you, if you’re not careful, the Isle of Man can have a magical hold on you.

Millennium Way
A challenging 25-mile trek through the heart of the island, from Ramsey to Castletown, following the ancient Royal Way.

Dhoon Glen
A short but steep two-mile walk down a steep-sided wooded ravine with waterfall to Dhoon Bay’s hidden cove and back over the open headland on the other side of the stream. Start and finish at Dhoon Glen Halt, north of Laxey.

Coastal path from Port St Mary to Port St Erin
Part of the 95-mile-long coastal footpath, this five-mile walk passes some of the island’s most dramatic coastal scenery: the Chasms, Spanish Head, the Sound and with views to the Calf of Man.

Ballasalla Station, Rushen Abbey, Silverdale Glen and Grenaby
Visit Isle of Man has produced a series of 11 self-guided walks for you to enjoy along with a ride on the Island’s historic Steam Railway. Alight at Ballasalla for a leisurely walk that covers beautiful countryside, rivers and open farmland. This 6.6-mile trail takes you past Rushen Abbey, an ancient monastery from the 12th century, before heading into Silverdale Glen.

Ballaugh Curraghs
The Isle of Man is fast becoming famous for its unusual collection of wild wallabies. In the north-west of the Island there is a breeding colony of around 100 wallabies which began after a pair escaped from the Curraghs Wildlife Park. For a chance to spot them, head to Ballaugh where you can trek through two miles of wetland and the outstanding Close Sartfield nature reserve for a chance to spot the elusive wild wallaby.