After 40 years of piping, Jack Heins is convinced that his music has been a gift from God.

“I truly believe that I was given this gift to pipe people home,” says ‘Piper Jack’ Heins from his home in New York State, referring to years of graveside visits.

“There is just something about the pipes that makes you smile and laugh at the happy moments…but there is also that same mysterious sound that makes your heart cry out during sad times.”

At funerals, he gathers the grieving family around the grave, sharing words of comfort before playing the old Scottish poem Auld Lang Syne.

“I explain that it is a song we all sing once a year, as the New Year is brought in, and that it is about having enough room in our hearts to make and accept new friends, while never forgetting the old ones…” 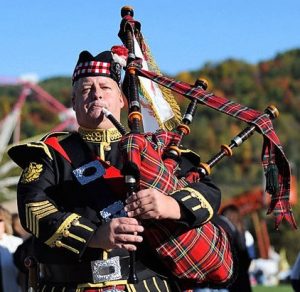 As a final fond farewell, he then pulls out an upbeat jig or reel.

“I tell the family that their loved one will dance their way to heaven. It is how I share my heritage with other people at a time when they need it most.”

Heins’ interest in death hits close to home; he once ‘died’ for 15 minutes himself.

“My son just happened to be home from college that week…he came running downstairs when he heard his mom screaming that I was dead. He immediately dialed 911 and the operator talked him through the whole CPR process. A week later, I woke up in the hospital staring at a bunch of nurses and doctors. They all kept telling me how lucky I was to be alive, and I kept saying how blessed I was.”

Even after 40 years as a student of the bagpipes, Heins notes that he is still learning to master the instrument. He describes himself as a traditionalist both in style and sound.

“I do like the slurring and echoing sounds that are being done on the piping circuit now, but I am more a march, quick march, jigs and reels kind of guy.”

He is often asked about his role as pipe major to his own troupe, the City of Syracuse Highland Pipe Band, which he founded in 2003. The question makes him smile, as his responsibilities involve making decisions based on the interests, talents and skill levels of 24 unique individuals. He is also tasked with ensuring that the instruments are in tune – a complex undertaking.

“Each bagpipe has a double cane reed in the chanter that is either flat or sharp,” he details. “Each set of pipes also has three drones that all have individual reeds in them.  Each one of those has to be tuned to the low A on the bagpipe chanter.”

Once one bagpipe is set up, Heins begins working on the other 12 to 14 sets as they must all be tuned to each other. The reeds tend to flatten or sharpen, depending on the weather.

“If the band doesn’t sound good, there is only one person to blame – me.” 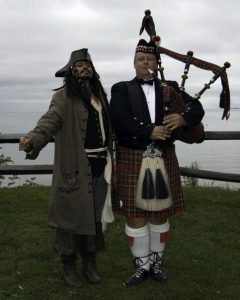 He wouldn’t have it any other way, of course. Scottish music comes naturally – his mother emigrated from Scotland at the age of 21 – and it has always been central to his life. He still plays the set of Kintail bagpipes his parents bought him back in 1977. His own son, Mike, joined his dad’s band as a snare drummer when he was just eight-years-old.

“He was so small that we had to take the drum apart and let him just play the top snare,” Heins recalls with a smile. “Now, Mike is 22, stands 6’4″, and is drum sergeant in the band.”

Retiring from teaching Technology Education after his experience of ‘dying’, Heins continues to instruct others on how to play the pipes. He doesn’t charge for lessons, however, as he received free instruction himself as a child.

He also hopes to keep comforting grieving families with his music.

“There are too many instances of people wanting to have their loved ones piped home, but have overlooked it during the duress, or simply didn’t know how to get in touch with a piper. I want to remedy that situation, as everyone should be piped home.”