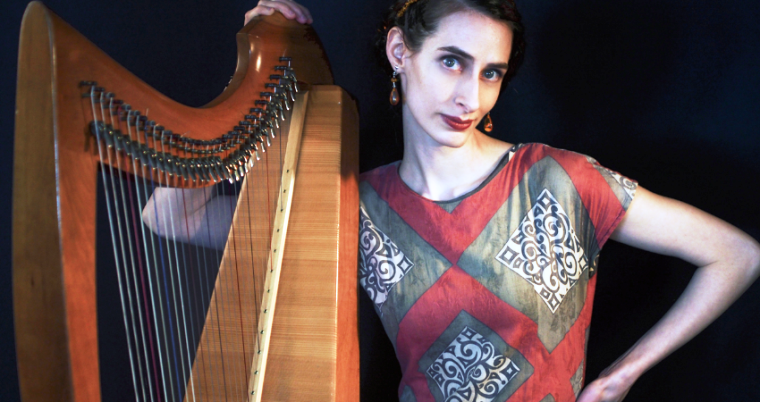 Lily Neill was only three years of age when she fell in love with the harp.

“I told my parents that I was going to play the harp,” she recalls with a chuckle from her home in the U.K. “It didn’t produce the desired effect though! I even made myself a little harp out of a shoebox and rubber bands to convince my parents that I should learn to play!”

In fact, growing up in a non-musical home, her revelation came as both a surprise and a shockto her parents

“I am not sure myself why I was so strongly drawn to the instrument,” she continues.“At that age, I hadn’t seen a harp in person. The only depiction I remember was in a Japanese film version of “The Little Mermaid” – which was, incidentally, my favourite book as a child.My third-grade teacher, Mrs. McDonnell, heard me talking about the harp and loaned me one of Derek Bell’s solo records. I was mesmerized! I ended up starting piano lessons when I was seven and, because I played a lot at home and tried to learn music that I liked by ear, my parents saw that music might be more than a mere passing fancy.”

“The more I’ve learned about the harp, the more I realize that – even though it’s a very old instrument – it’s still developing in terms of both repertoire and engineering.

There is so much ahead for it, and so much unexplored territory. That really excites me and remains a strong incentive to continue.” 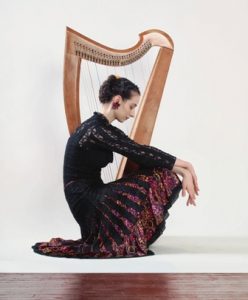 Neill’s musical journey has been filled with manyhighlights and rewards.

“In a way, Derek Bell’s record helped convince my parents to arrange harp lessons for me, so getting to play duets with him, and with The Chieftains, at the Kennedy Center Concert Hall in Washington, D.C. when I was in my early teens was really memorable. I didn’t know it at the time, but those concerts were his final two in Washington, D.C. so I feel very fortunate to have had that experience.

“I have also played for two presidents, U.S. President Bill Clinton and Irish President Mary McAleese. Another highlight was that my first CD was submitted to be considered for a GRAMMY award and ended up making it into the official GRAMMY book. I am just as proud of some small concerts I have played over the years, where the audience was really appreciative and I felt like I was playing my very best. When all the stars come into alignment and you feel like you have been able to conjure something truly meaningful it is a memory that stays with you.It is also immensely rewarding when I have written music that I am happy with.”

She says that her biggest challenge as a musician is living in the digital age.

“I love performing live and everything that it encompasses, but the sense of abandon one feels onstage vanishes quickly the minute an iPhone pops up in record mode. Although it is quite flattering, it can also be very frustrating for performers because that fleeting moment between the player and the listener is compromised.”

Neill – who currently plays a modern-day descendant of the very old instrument called a “lever harp” –hesitates to classify her music as “traditional.”

“I would describe my playing as that of someone who likes to use the past to create a sound for the present. The harp has a lot of volume and I love using effects and textures to manipulate its voice and make it sound as expansive as possible. Because I mostly play solo concerts there is the wonderful challenge of using one instrument to hold listeners’ attention for a few hours and the harp is an ideal solo instrument – it’s like having a mini-orchestra at your fingertips!There are always new things to uncover and new ways to try to use the instrument”

Her enthusiasm continues to evolve, with a number of new projects in store for the coming while

“I am finishing work on a new recording and will be back on tour shortly. I also have a slew of pieces that I need to finish writing and arranging, and I am currently collecting material for a book as well. Stay tuned!”