Lost Children of the Carricks 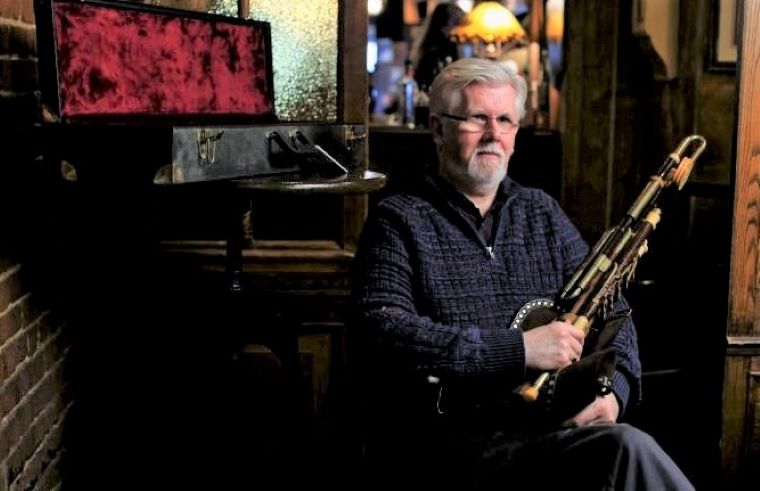 There is an old Irish tradition, most common in the western part of the Emerald Isle, when one was preparing to leave home. Fire, lit in the hearth of that home, would be brought to the hearth of a neighbour in the hopes that the departing would return someday to reclaim it and bring it back from whence it ignited.

Many fires were left in neighbouring fireplaces that would never be recovered when thousands of families fled the Emerald Isle during the Great Famine of the 1840s. Professor Gearóid Ó hAllmhuráin’s new documentary film, Lost Children of the Carricks, tells the tale of one family’s effort to return for that long-lost flame.

Born in Ennis, County Clare, Ó hAllmhuráin has spent the last 30 years teaching Celtic Studies and related topics across North America. He currently sits in residence as the inaugural holder of bilingual Johnson Chair in Québec and Canadian Irish Studies at Concordia University in Montréal.

The documentary’s origins arose from Ó hAllmhuráin’s acquaintance with the descendant of one of those families that left Ireland for the greener pastures of Canada.

“I met Francophone historian, Georges Kavanagh in the Gaspé in 2013,” Ó hAllmhuráin explains. “The Kavanagh family had insisted for generations that there was a mass grave along the shore with the bones of 87 passengers from the Carricks of Whitehaven that wrecked off the coast of Cap-des-Rosiers in late spring 1847.”

As it turns out, Kavanagh’s forefathers were on that ill-fated ferry. 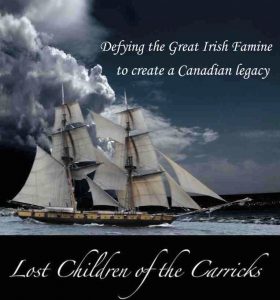 “Our film weaves Georges’ French narrative into the pre-famine Gaelic-speaking world of his ancestors in County Sligo in the West of Ireland, their Atlantic crossing and tragic loss of life on the Carricks, their long integration into Québécois society following their arrival in Canada and, finally, their reunion with Irish cousins.”

The Kavanagh name, and the similar Kavaney, Ó hAllmhuráin explains, is likely a corruption of the family name Ó Géibheannaigh, and ancestors from Sligo would have been entirely Irish speaking in the 1840s. Their Irish descendants speak English now, but language was still a huge barrier for Kavanagh.

“As a Francophone, Georges was anxious to make the journey to Ireland to walk the land of his ancestors. He had visited Sligo in 2011 with his son Bernard, but they did not visit the townland, nor see the original homestead. He was hesitant to return without a translator.

“In 2015, we organized a trip to Ireland, bringing Georges, his wife Agathe, and his children, Bernard and Renée, to retrace the footsteps of his ancestors and, hopefully, reunite with Irish cousins.”

A tight budget was one of the challenges of completing the film, although several Canadian and Irish historians and musicians lent their expertise and/or talents to the cause. However, while the language barrier between the Kavanaghs and their distant cousins was present, it didn’t present as much of a challenge as feared.

“You can imagine the fun between them – a few pints of Guinness, laughter, and songs made everything much easier.”

Left to smoulder for far too long on the embers of history, Kavanagh was finally able to reclaim the fire his forefathers had left with neighbours so long ago.

“When news of the wreck of the Carricks reached Ireland, loved ones left behind assumed there were no survivors and that part of their family tree was severed forever,” shares Ó hAllmhuráin. “This heartbreak passed from generation to generation for 168 years until, finally, our French-speaking Québécois family returned to Ireland looking for their roots and for healing.”

Now that this story has been told, Ó hAllmhuráin says he is hearing from other distant relatives as far afield as Australia and New Zealand.

“We have been contacted by descendants on both sides of the French-English Kaveney family tree, and we have been able to create several exciting connections among Irish famine descendants looking for their roots all over the world.”

The documentary is set to make the rounds on the film festival circuit this year.

“As the film gets ready to tour North America and prepares for its European première at the International Ethnografilm Festival in Paris, there is a great sense of enthusiasm and excitement among the production team. All the hard work of the past five years has finally come to fruition. Quebec’s voice within the Irish famine diaspora has finally been heard.”