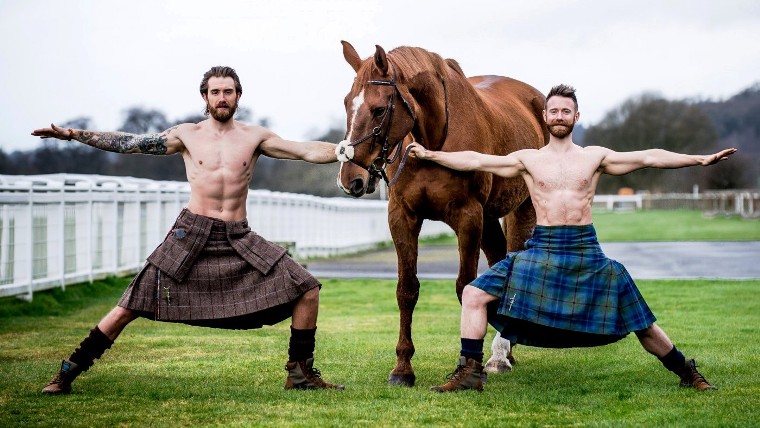 Earlier this year, the cheeky “Kilted Yoga” video went viral across various social media platforms. The short clip starred a handsome Scottish duo, practicing yoga before a woodland backdrop, clad in nothing but their kilts.

Tristan Cameron-Harper and Finlay Wilson began their journey together following an event at BBC Headquarters in Glasgow, Scotland.

“The program, called The Social, was a new platform on the BBC networking scene that gave people in Scotland the privilege to showcase whatever they would like to show with the general public – subject to approval, of course,” explains Cameron-Harper, who was born in the British Channel Islands. “Finlay is a yoga teacher, and I am someone who enjoys doing yoga; I was involved with the discipline when l used to play professional ice hockey – it helped me with all the bumps and bruises.” 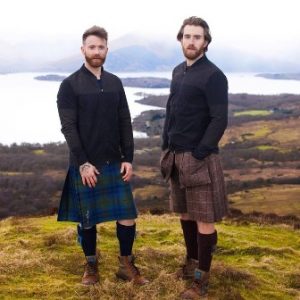 Cameron-Harper, who is of both Celtic and Nordic background, could envision himself collaborating with Wilson on something unique.

“After seeing him on social media, and attending a few of his classes in my hometown of Dundee when l was younger, I knew I’d work with Finlay. He wanted to do a yoga video and l love the outdoors and enjoy meditation, so he suggested we should do a yoga video together. The clicker would be the end scene, where we drop our kilts. Initially we didn’t get the go ahead, but after Finlay made a video showcasing him and his dog doing yoga poses – which got millions of hits – it gave us more freedom to play about with our ideas.”

The resulting video was an overnight success, racking up over 52 million views on Facebook alone.

“It has been a turbulent and exciting couple of months,” admits Wilson, who was born in Lanark. “The reception has been incredible; we have been on most TV stations over here and many others internationally. We have been featured in magazines and newspapers all over the world, and we have just returned from New York, where we walked down 6th Avenue as part of the Tartan Day Parade to screaming crowds who came to see us.”

Incredibly, in the wake of all the success, Wilson received hate mail regarding both the video and his sexuality.

“So many people got in touch about that vile letter,” he shares. “People may not think that homophobia is an issue anymore, but unfortunately it is alive and thriving. And I will take it head on.”

Wilson began practicing yoga 11 years ago, after having surgery on both of his legs. Since then, he has been trained in “Forrest Yoga” and now owns and operates a studio in Dundee.

“Forrest Yoga is a fusion of shamanic ceremony with yoga to create a highly focused practice,” he explains. “I have studied and delved into Celtic Shamanism to bring the sense of ceremony to people I teach in a way that resonates and connects to this land.”

The two agree that there is a deep connect between the sacred practice of yoga and the rich history of the Celts. 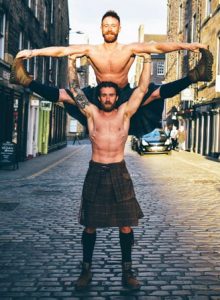 “There is a synthesis between ancient Indian practices and some ancient Celtic practices, including Druidism,” notes Cameron-Harper. “Plus we are seeing more links between imagery of Hindu Shiva and Celtic Cernunnos. The term Druid, technically, comes from a Sanskrit word meaning ‘Knower of the Tree’.

“It doesn’t matter what your religious beliefs are, the fact is that our ancestors celebrated being part of nature, changes of the seasons, animals, and they understood the power of our earth and sky. There is a connection between that and improving our state of well being, both mentally and physically.”

In the coming months, Wilson will continue to focus on running his studio, developing classes, workshops and retreats. Cameron-Harper will keep growing his online presence via his website, NorthBlog, pursue a mountaineering career, and further his involvement in saving dogs from the Korean meat trade.

Neither will forget the significant message behind their popular video.

“It is important that we put phones away sometimes, take a break from laptops…just get away from modern technology in general and go outside,” Cameron-Harper reminds us. “It is vital that we remember our connection to the beautiful earth we are standing on – especially nowadays.”