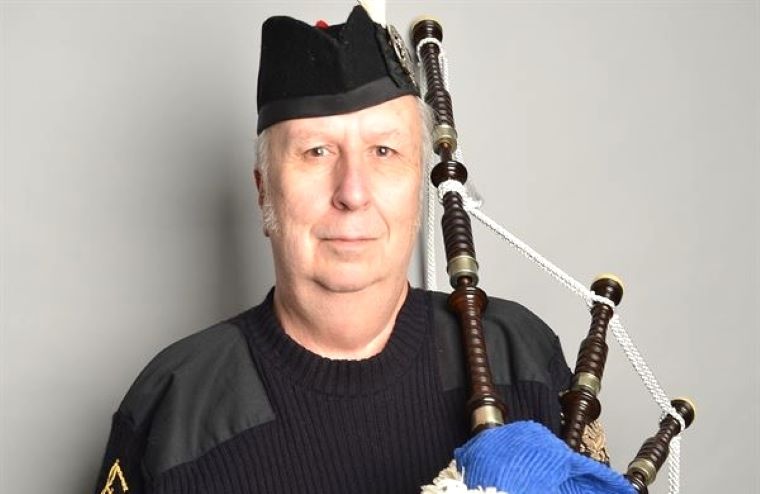 Piper Wayne Francis’ family heritage is steeped with an assortment of ancestries.

“My DNA reveals the presence of genes from Ireland, the United Kingdom, Germany and the Nordic region,” he shares via email from his home in Baltimore County, Maryland, where the Francis family has lived for over 300 years. “The last name itself – Francis – means one from France. As we know now, the Vikings had a nasty habit of raiding the coasts of France, Ireland and England.”

“I remember watching old black and white movies on TV. The piper always carried themselves nobly.”

However, it was the live broadcast of President John F. Kennedy’s funeral in late 1963 that really stirred Francis’ soul.

“I saw that a piper at a funeral was a special event. I was 10 at the time and remember the great honor that the piper brought to the day. At that time, every American boy and girl wanted to play the guitar. I have spent a long time playing the guitar – however, it never felt fluid or natural.”

Interestingly, it was a budding friendship with a Scotsman that pushed him over the piping edge.

“He and I began exchanging Christmas presents and he sent me a cassette of The Strathclyde Police Pipe Band. I loved the sound – it spoke to my soul. Around the same time, I learned of a pipe band in nearby Towson (Maryland) that was offering free lessons as a way of bolstering their roster and so I started studying with The John F. Nicoll Pipe Band. For whatever reason, I found it quite natural to play the practice chanter.”

These days, Francis performs exclusively at funerals. In fact, he is known as the Funeral Bagpiper and is often seen at “solemn gatherings.” 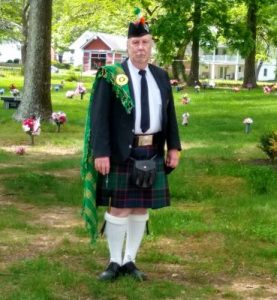 “I had a moment of inspiration early on whilst learning to play that said, ‘This is something you can offer to those who are experiencing loss and in grief.’”

“There is a sense of satisfaction when the instrument and the performance come off without a hitch,” he continues. “I remember an older Scottish piper telling me that every time I play for an occasion it is really just another opportunity to practice, which is very true. I do not seek reviews as I think that what I do – and the privacy of the suffering family – is sacrosanct.”

Francis recalls many notable highlights over his piping career, including a particularly fond memory that took place at Fells Point in Baltimore.

“A local celebrity bartender had passed on and wanted a piper and a funeral band from New Orleans for the procession. I let the band lead the way and I brought up the rear as the lone piper. That made it into the local paper.”

He feels positive about the future of piping and notes the impact that young people today play in keeping the musical tradition alive.

“When I was in solo competition years ago, the young ones really rocked the scene. Starting out young is never a bad thing, if you are under the tutorship of someone who knows what they are doing. Piping really enriched my life in so many ways. I think that so long as pipe bands and universities promote the instrument with outreach, it can only improve. Tutorship is a great way for someone to learn. In addition, over the last 20 years or more there has been a rebirth of Celtic music, crafts and spirituality, and piping has been a vital part of that renewal.”

For the immediate future Francis plans to further diversify his music portfolio.

“Currently I play the Scottish bagpipe and the whistle. This year I am learning to play Ireland’s little-known bagpipe, the Uilleann pipe. It is quieter and sweeter than its highland cousin. I am gearing up to offer this instrument for funerals and memorials- for the Irish heart.”